Afghans in Germany terrified at situation back home | Germany | News and in-depth reporting from Berlin and beyond | DW | 20.08.2021 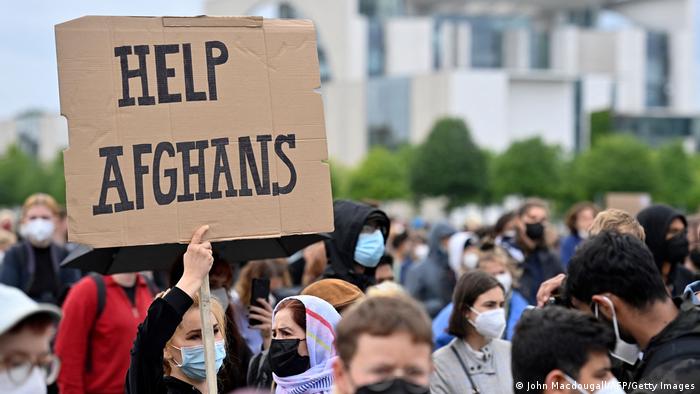 Afghan national Jalal is terrified for his family. "My family is in Kabul now, in a hiding place, but the Taliban is searching every house," he told DW, using a pseudonym to protect the identity of his family. "They are knocking on the houses, searching for people who worked with the Afghan government or military, or if they have arms or ammunition. I don't know what's going to happen to her."

His wife, who was a member of a women's organization, is also in hiding and terrified, he said, but Kabul airport has been cut off by the Taliban, and all the road borders are now closed, too. "The situation is very frightening and horrible," he said.

The 26-year-old student made it to Germany a day before Kabul fell into the hands of the Taliban, thanks to his student visa, but he had no option but to leave his family behind.

"My ideology has always been against the Taliban and their regime," he said. "I am from a political family, and I have been a Western-educated person with the political, social ideas that can never be accepted for them. I and my family have been threatened by the Taliban many times."

The desperate situation in Afghanistan

Jalal also has no faith in the Taliban's promises not to carry out reprisals. "They are manipulators — they are lying right now in order to calm people," he said, saying that he had heard that the Taliban had already killed people in the provinces they had occupied. "I am absolutely 100% sure that they have lists of people who have worked with the government, who said bad things about the Taliban, and they will get revenge," he said.

Jalal feels that NATO's precipitous withdrawal from the country was badly mishandled. "I'll give you the example of Bagram airbase," he said. "They went at night without alerting anyone. They betrayed Afghanistan."

The whole situation has left him utterly baffled by the response of the Afghan military. "I cannot process the situation that has happened to Afghanistan," he said. "Why did they leave? Why wasn't one bullet fired (as Kabul fell)? I don't know why all this happened without any fight between our soldiers and the Taliban."

The long delays in granting visas has led to bureaucratic confusion — German media have reported that, even though helpers were supposed to be told where exactly in Germany they should travel to, Afghans were often left to arrange their own travel, which meant that people arrived at airports in Germany with no one to tell them where to go. In some cases, it was left to relatives in Germany to call the refugee homes to organize shelter for the new arrivals.

In fact, Jalal's visa runs out on August 31, but it is unlikely he will be flying back now.

Europe has long been ignoring the deteriorating security situation in Afghanistan. But now that the Taliban has seized power, some Western countries act stunned. This hypocrisy must stop, says DW's Waslat Hasrat-Nazimi.