Germany′s Afghan support staff glad to be alive in Berlin | Germany | News and in-depth reporting from Berlin and beyond | DW | 21.08.2021

Germany's Afghan support staff glad to be alive in Berlin

Two Afghans who helped the German military managed to the country before the Taliban took control. They told DW about their sleepless nights, fearing for those they've left behind. 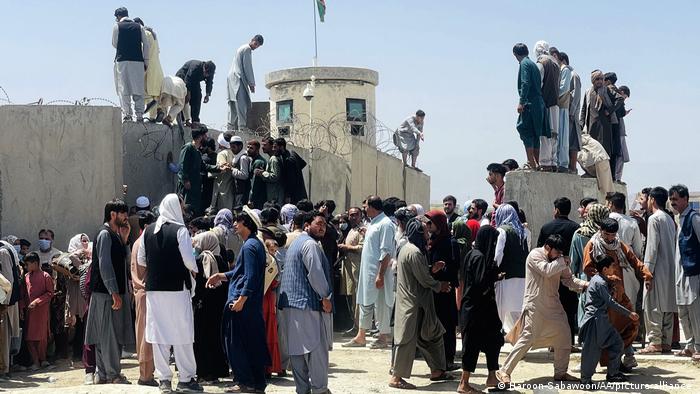 Nabi* and Sultan* already decided to leave last year. The two friends from northern Afghanistan had been working for the German government for several years when the fighting got too close.

"The northern provinces were getting worse day by day," said the 37-year-old Sultan, who spent the last two and half years as a security driver at a German consulate. "We knew that if the international military were leaving, we would be killed by the Taliban."

"I lost my home, I lost friends, I lost my family — I'm here," said the 38-year-old Nabi, who helped interpret between Afghan and various NATO forces from 2003. "My mind, my brain, my heart, my everything is back home, because my family is in deep danger, because the Taliban are looking for them now. We are very worried, we don't sleep at night."

After several months of bureaucratic hell, as the passports for his wife and his six children had to be delivered from Kabul, and finding friends who would lend him the $7,000 (€6,000) he needed for travel, Nabi was finally able to fly himself and his family to Berlin in mid-July — and not before time. A couple of weeks later, the Afghan state they had known and served had disappeared. Sultan, who arrived a few days earlier, brought his wife and two children. 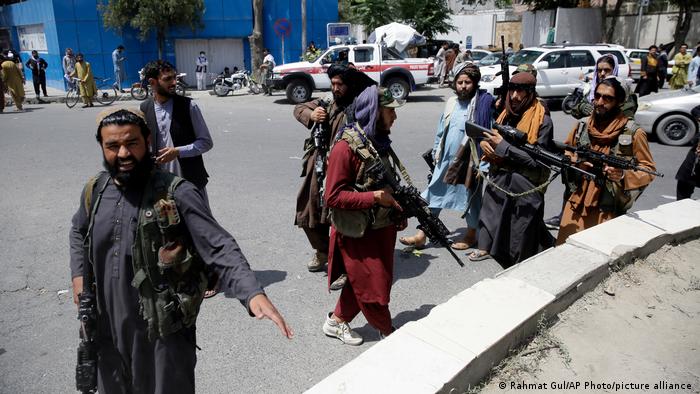 The Taliban now control the streets of Kabul

Like other Afghan support staff who managed to make their way to Germany in the last few weeks, they were not met at the airport by anyone — all Nabi had was an email with instructions to get a taxi to a specific refugee home in Berlin.

But not all their family members could come with them. German authorities allow only what they call the "core family" to get visas, which is a bit of a cultural disconnect for the two men. "I think for Western people, the core family is only the man himself and his wife and children, but for us the core family is our big family: our father, brother, everyone," said Sultan.

The Taliban are also unlikely to make the distinction that the German government does, and Nabi and Sultan have no faith in assurances that they would not carry out retribution. "Ninety-five percent of the Afghan people don't like the Taliban, but they are afraid of their cruelty and barbarity," said Nabi. "These are not people we can rely on. What they say and what they do is totally different."

Now Nabi and Sultan are thousands of miles away, sitting in a communal room in a rather dilapidated former housing complex in a southern suburb of Berlin. This is refugee housing for some 700 people, mostly Syrians and Afghans. It's supposed to be temporary accommodation, but — Berlin's notoriously slow bureaucracy and hellish rental market being what it is — no one stays here less than four months, and many larger families stay in the accommodation for years.

All Nabi and Sultan can do is watch their country unravel on the news, terrified for their parents and siblings, while being occasionally distracted by the various German bureaucratic appointments they have to keep.

Fear for the extended families

Nabi is also surprised that there has been little effort from the German government to acknowledge their service. He is upset by the way that they are simply being treated like any other war refugees. "We risked our lives, we risked everything there, we left everything there. The Bundeswehr should at least recognize our help, our support," he said. "They should give us permanent homes somewhere."

Meanwhile back home, the situation is deteriorating. "My friends are already asking for the money back that they lent me," said Nabi. "Because, you know, under the control of the Taliban there is no work, no business, no nothing to feed their families."

But Nabi can't pay anything back yet, because he doesn't have a work permit. As their work is deemed to have helped defend Germany's political interests, Afghan support staff are supposed to be granted both a three-year residence permit and a work permit. But things don't happen that fast here.

As for the situation back home, the two men can't quite believe what has happened to their country. Neither of them expected the complete collapse of the Afghan military. "Mostly we were concerned about the civil war that would be going on," said Nabi. "We did not think the whole government would collapse in one or two days."

They also believe that the withdrawal of Western forces was too quick. "The international armies were going to be withdrawing someday — they couldn't be there forever, but we think it is not the time that they should leave Afghanistan. They could have been there longer to stabilize the country and the government," said Sultan.

*The protagonists' names have been changed to protect their families in Afghanistan.

Two of the Bundeswehr's Airbus H145M helicopters arrived in Afghanistan to bring people hoping to flee the country to Kabul airport. The choppers will be used by special forces in combined air operations.

The role of local journalists in reporting from abroad cannot be underestimated. As with all media outlets, DW's work would be impossible without them. Now, in Afghanistan, their lives are in peril.