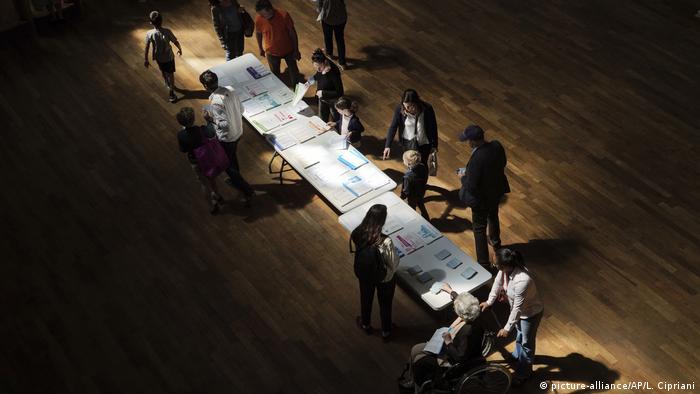 For the latest results from the European Parliament elections, click here.

17:46 Manfred Weber, the Christian Democrat tapped to lead the European Commission for the European People's Party (EPP), said the high voter turnout across the bloc is the "most important" news from the polls.

"People went to vote, they participated," Weber told DW. "They used their right to vote to decide about the future of Europe and that gives the European Parliament much more credibility and legitimacy for the future of the continent."

17:30 As voting across the EU winds down, the European Parliament elections are on track to be the first time voter participation has risen since the process started in 1979.

16:36 Results are streaming in. From Germany to Greece, click here for the latest.

16:22 In Hungary, voter turnout is significantly higher than the 2014 election. By 5:00 pm local time, participation was at 37%, up from 24% in the last vote, according to the Hungarian electoral commission.

15:56 Exiled Catalan leader Carles Puigdemont is expecting to win a seat in the European Parliament, reported Politico Europe, citing his spokesman. Puigdemont ran his campaign out of Brussels, where he resides after fleeing his native Spain over his involvement in an illegal referendum on Catalan independence.

13:50 Guy Verhofstadt, European Parliament's Brexit coordinator and leader of the liberal ALDE group, cast his vote in his hometown Ghent. "I hope you used your right to vote as well," he said in a tweet.

13:43 The UK's Conservative Party is bracing for major losses in the European elections. Daniel Hannan, a Tory and European lawmaker, said his party could be "wiped out" for failing to get any of the UK's 73 seats.

"So this is what annihilation feels like," Hannan said in an op-ed published by The Telegraph. "I can tell you now that the Conservatives have been wiped out. I don't expect to hold my seat; and, if I have lost then so, on a uniform swing, has every Tory MEP."

13:35 Seats in the European Parliament are allocated out proportionally, based on each member state's population. Cyprus, Luxembourg and Malta have the fewest seats with six each, while the EU's most populous member, Germany, has 96 seats. The results from member states will be released this evening after the last polling station in the bloc is closed.

12:53 Several "yellow vests" protesters were detained by police during the last day of the European Parliament elections in Brussels on Sunday. Footage posted on social media showed officers running through the streets of the Belgian capital.

12:45 "I don't want to see a right-populist Europe [that] wants to destroy the idea of togetherness," said Manfred Weber, the Christian Democrat tapped to lead the European Commission for the European People's Party (EPP). The center-right EPP is currently the biggest group in the legislature.

12:29 The Czech Republic's political mainstream is under pressure from the far-right, in particular the anti-migrant Freedom and Direct Democracy party (EFDD) who has managed to keep the perceived threat from migration very much alive, and the other parties have had to react, reported DW's Prague correspondent Rob Cameron. "Which is why we're being treated to the sight of tough-talking Prime Minister Andrej Babis in a Trump-inspired red baseball cap with the words 'Strong Czech Republic' emblazoned across it."

12:20 Outgoing European Commission President, Jean-Claude Juncker, tweeted that he voted. Today's election will help determine who replaces the Luxembourger as head of the Commission as well as other top EU jobs.

12:20 The center-right is expected to remain the largest group in the next European Parliament despite shedding seats, while two euroskeptic groups could see their combined support climb, according to an EU-wide survey conducted ahead of today's vote.

11:50 Among those standing for European office in Romania are ex-tennis legend Ilie Nastase, a priest, three former Romanian prime ministers, an ex-president, as well as the former prime minister of neighboring Moldova, reported DW's Kit Gillet. "Support for the EU remains strong in Romania, one of the bloc’s newest member states. None of Romania's parties are campaigning on a euro-skeptic platform." 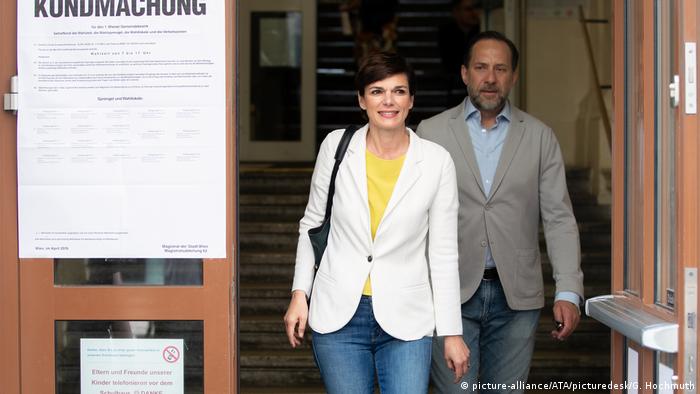 10:40 The Kotleba-People's Party Our Slovakia (LSNS) — a far-right party that has 14 seats in the Slovakian parliament — is expected to win seats in the EU legislature for the first time. Last month, Slovakia's Supreme Court rejected a call by the country's state prosecutor to outlaw the party. It is one of a number of far-right and anti-immigrant parties around Europe calling for EU-membership withdrawal referendums.

10:17 In France, voter turnout was a record 19.26% at noon (10:00 UTC) compared to 15.79% at the same time during the last European Parliamentary elections in 2014, according to the country's interior ministry. Could that tip the balance in an election where centrist Emmanuel Macron's list and the far-right RN are predicted to be neck and neck?, asked DW correspondent Lisa Louis on Twitter. 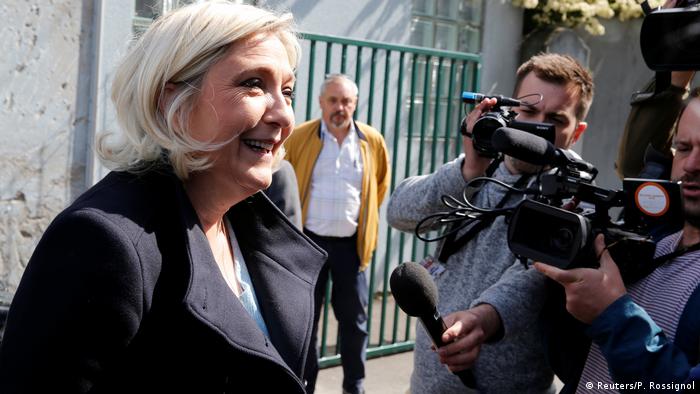 10:10 The British government is facing a potential legal challenge over the denial of votes to EU citizens. Hundreds — if not thousands — of non-British EU citizens were turned away from polling stations on Thursday after being told they were not registered to vote in the United Kingdom for the election of the European Parliament.

09:51 Manfred Weber, the center-right German candidate to head the European Commission, said he hopes voters will back a "Europe of stability" and a united and ambitious continent. "I don't want to see a right-populist Europe (that) wants to destroy the idea of togetherness ... and I'm also against a Europe which is in the hands of the left." 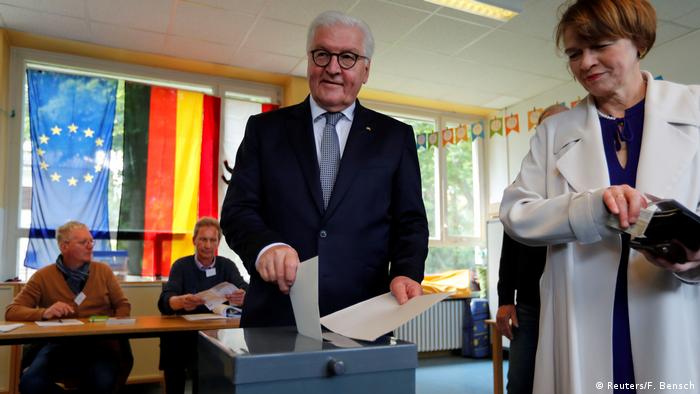 09:40 Austrian Chancellor Sebastian Kurz — whose governing coalition collapsed a week ago amid a video scandal — said he hopes the elections will strengthen the center rather than parties on the far-right and left.

09:10 Spanish caretaker Prime Minister Pedro Sanchez called on "all the political forces to open a horizon of political stability" after voting in Madrid. He said that the elections are "to decide the future of progress and wellbeing for the entirety of our country and Europe." 08:45 Voting in Belgium is obligatory, as DW's EU correspondent Georg Matthes pointed out on Twitter. Voting is also compulsory for both nationals and registered non-national EU citizens living in Bulgaria, Cyprus, Greece and Luxembourg.

07:45 The election will hopefully strengthen anti-immigration political forces across Europe, Hungarian Prime Minister Viktor Orban said after casting his vote in Budapest. "I hope that there will be a shift in the European public arena in favor of those political parties who would like to stop migration." Orban rejects any redistribution of refugees across the bloc 07:15 Support for the Green Party surged in Ireland — where the vote was held on Friday — putting the Greens on course to win as many as three European seats, according to an exit poll for broadcasters RTE/TG4. European Greens co-lead candidate Bas Eickhout spoke of a "green wave" rolling on to Irish shores from the Netherlands, where an exit poll put GroenLinks' (GreenLeft's) share of the vote up to 10.5%.

06:25 Around 400 million people are eligible to vote for 751 MEPs who will serve for the next five years and help shape Europe’s future. There's a lot at stake. The issues of Brexit, immigration and the rise of right-wing parties across the bloc could bring some surprises and make these polls the most important since the first direct elections 40 years ago.

Read more: EU election: Europeans head to the polls across the continent 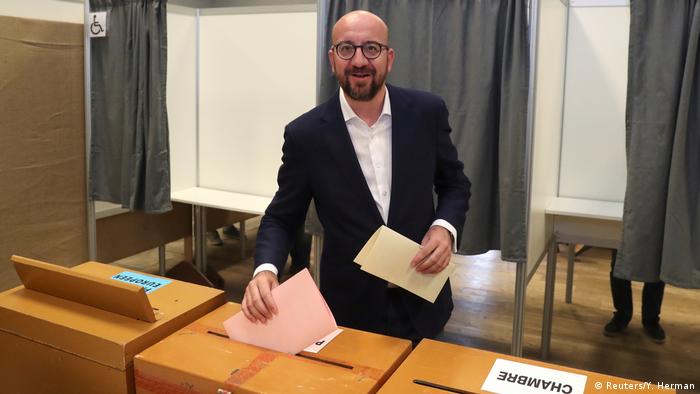 The Netherlands and the UK headed to the EU polls on Thursday — the first day of election — followed by Ireland and the Czech Republic on Friday and Latvia, Malta and Slovakia on Saturday.

A total of 420 million EU citizens are eligible to cast their ballot in these elections.

According to exit polls, the Netherlands' center-left party of EU Vice President Frans Timmermans won the most votes and added two seats to the Socialists and Democrats (S&D) bloc in the EU Parliament.

In Britain, hundreds of non-British EU citizens were turned away from polling stations on Thursday after being told they were not registered to vote in the UK for the election. The British government is now facing a potential legal challenge over the denial of votes to EU citizens.

As Germany, France, Italy, Spain and Poland send almost half of all MEPs to the European Parliament – 348 out of a total 751 – the Sunday vote is dubbed the most crucial of all rounds. Opinion polls suggest that far-right groups and Euroskeptics could gain more strength in the European Parliament, with populist parties such as Marine Le Pen's National Rally in France and Matteo Salvini's Northern League in Italy are expected to perform well in the polls.

They pay taxes in the European Union, call it home — some for decades. But they cannot vote in the European Parliament election. Some 17.5 million non-EU residents of voting age are sidelined, DW has calculated. (25.05.2019)

The Czech Republic, Slovakia, Malta and Latvia are casting their ballots in day three of EU parliamentary elections. Many predict nationalists and far-right groups are expected to make historic gains. (25.05.2019)