How young voters matter in European Parliament elections | Europe | News and current affairs from around the continent | DW | 23.05.2019 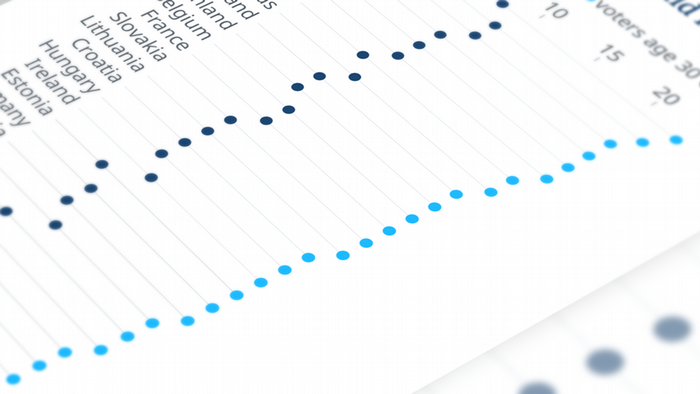 "In this election, you vote for the future living conditions of humankind." That was Greta Thunberg's message to members of the European Parliament in April. The renowned environmental activist is the leading personality in the wave of school strikes and demonstrations against climate change by Europe's young people. At 16, she is too young to vote herself. But many of her peers will be able to participate. As this analysis by DW shows, the 28 million first-time voters will not only have an impact on the makeup of the next European Parliament, but also on EU politics for years to come.

The elections for the European Union's legislature take place from May 23 to 26 in the 28 different member states. With a potential electorate of 400 million voters, it is the second-largest democratic exercise in the world. Only India's general election is larger.

The 751 representatives in Strasbourg and Brussels have decision-making power in matters ranging from digital rights and the environment to trade and consumer protections. Those powers increased in 2009, when the Lisbon Treaty came into force.

Youth take to the streets...

In the lead-up to the election, young Europeans have made their voices heard on several issues. For example, they demonstrated for their digital rights by setting up campaign outside the headquarters of Angela Merkel's party in Germany to protest against an EU "upload filter” tightening online copyright rules. In Britain, pro-EU youths have marched repeatedly against Brexit. They have demanded a second referendum on the decision to leave, as many of them weren't old enough to vote the first time in 2016.

What impact could young voters have? The European Parliament is elected every five years, so people who were just under 18 in 2014 are now 22. First-time voters are therefore EU citizens between the ages of 18 and 22 — except in Greece, where the voting age is 17, and Malta and Austria, where it's 16.

As DW's data analysis shows, the share of first-time voters in the electorates of various EU member states ranges from 5% to 8%. And the overall electoral share of people younger than 30 means a margin that could in fact make the difference. Youth voters make up about 20% of the electorate in some EU member states' electorates, as this chart shows. 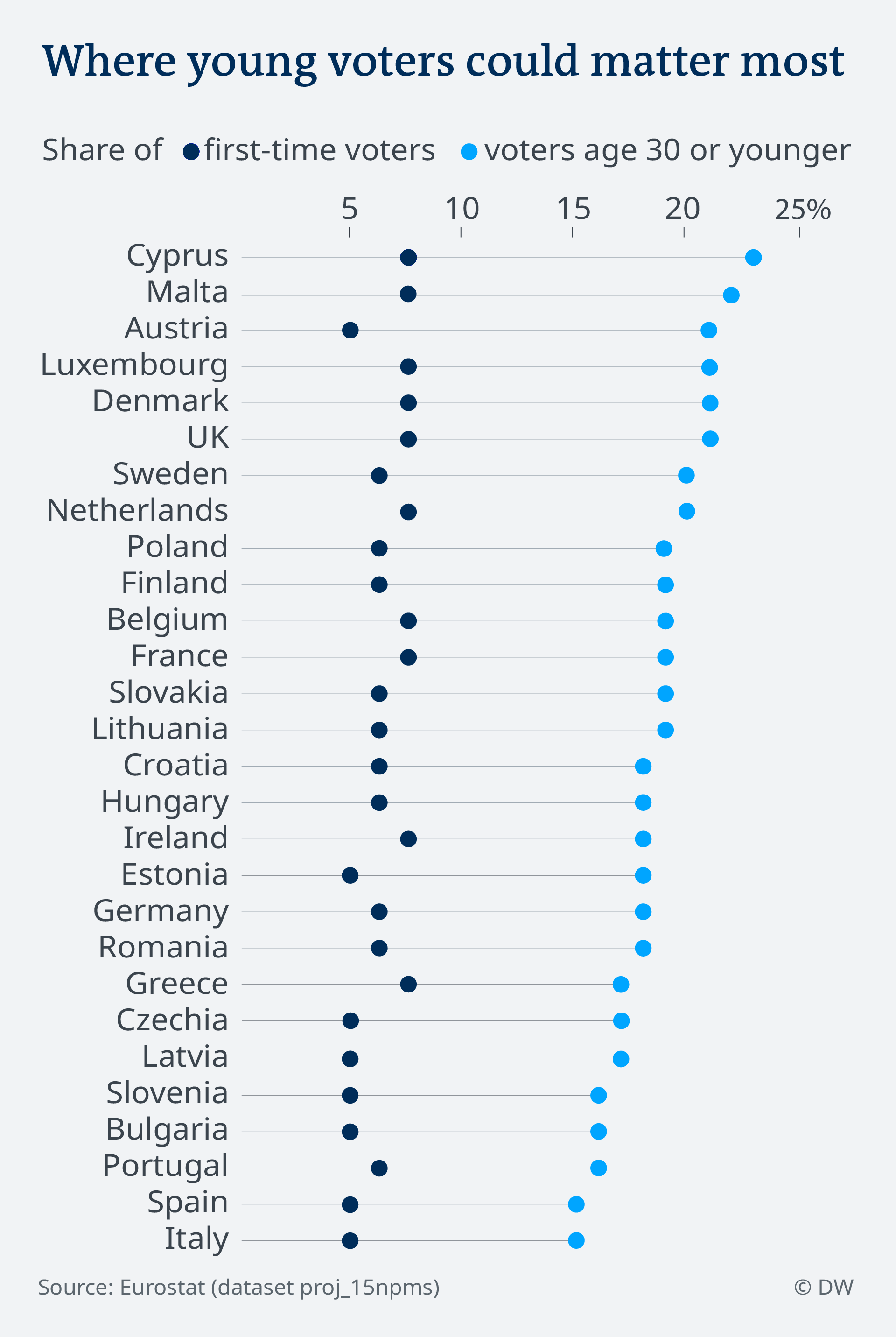 ...but will they take to the polls?

The preconception persists that young people would rather take to the streets than go to the polls. This may be true of the upcoming elections: Polls by the European Council on Foreign Relation (ECFR) suggest that young people are less likely to vote than other age groups.

But what impact might young voters have if they were to turn out? In some cases, a very big one — especially in countries where political attitudes differ greatly from generation to generation. "The Czech Pirate Party is twice as popular among the young as it is among all Czech voters," said Pawel Zerka from the ECFR. In the last election, the Czech Pirate Party won less than 5% of the votes and didn't get any seats in the EP. Given the party's growing popularity, young voters — who constitute 17% of the Czech electorate — could help determine whether it wins seats in this election.

Another example is Wiosna, "Spring" in Polish, which was founded in February and is steadily tracking at 10% in polls. If that estimate holds, the party could win six of the seats allocated to Poland.

Other youth-oriented parties aren't doing as well. The pan-European VOLT initiative seems unlikely to gain any seats in the next European Parliament. And UK polls also indicate that almost half of the first-time voters favor Labour, which is rather indecisive over Brexit, and only roughly one-third support the pro-EU Green Party. Far fewer back the newly founded pro-Remain party Change UK.

To young people, the EU isn't merely a peace project

For young voters, the European Union has been a permanent fixture. Few youths who grew up in the eurozone, for example, have ever known another currency.

But these young voters also experienced a Europe in turmoil as they came of age. Millennials were especially hard hit by the financial crisis, which saw young people in Greece and across Southern Europe denied a sustainable economic future in their home countries.

As youths have not experienced military conflicts or the Cold War, the future matters more to them than their parents' past, according to Zerka: "They do not naturally accept the notion of the EU as a peace project," he said.

What matters to young voters?

The priorities of young voters are shaped by their worries about job instability and the environment. Parties could improve their poll performance by taking these perspectives into account. "This is the case for most Green parties, including those in Germany, Austria, France, Sweden, and the Netherlands," Zerka said. In all of these countries the Greens have already gained more than one seat in the last European Parliament. With the support of young voters, they could gain even more this time.

But nationalists, too, can appeal to young voters who are concerned about their futures. "In some countries, a significant number of young people are drawn to far-right or anti-establishment parties," Zerka wrote in an email to DW. First-time voters, for example, support the euroskeptic Jobbik party at a rate twice that of Hungarians as a whole. Vox in Spain and Kotleba in Slovakia are similarly popular with the youth.

Having a say in the EU's future — not only via referendums, but also by helping to determine who will sit in the European Parliament — is crucial to young voters. The average age of an MEP in the 2014-2019 legislature period was 55, with 28 being the youngest and 90 the oldest. The new average age of parliamentarians could be much younger: The French anti-immigrant party National Rally has 23-year-old Jordan Bardella atop its candidate list.

Politicians who have an eye on the long term would do well to invest in reaching out to young voters. This election could be the beginning of a lifelong habit for many. "Most people's basic outlooks and orientations are set fairly early on in life,” the Pew Research Center reported in a recent study. And the ways in which young voters cast their ballots this May could indeed shape the European Union for decades to come.

Given the chance, young Europeans would vote no to a Brexit, Frexit, Grexit or Polexit. They believe in democracy but not in their political institutions. And they see Donald Trump as a threat, a new study shows. (03.05.2018)

The 77 Percent — Young voters in Africa