Critics of EU internet copyright reforms have rallied across Europe ahead of a crucial vote in the European Parliament. Critics say upload filters will lead to censorship. Advocates say creators must be fairly paid. 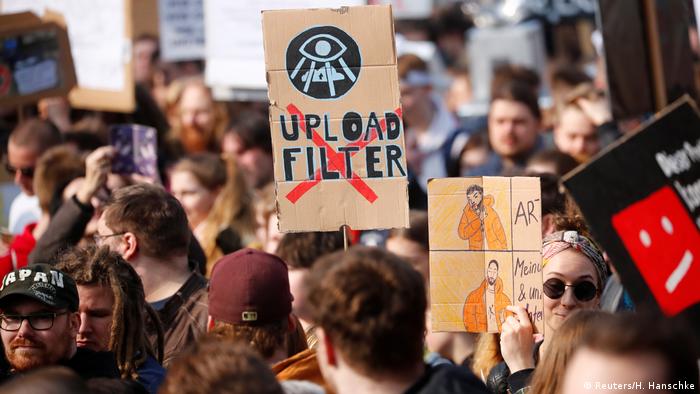 Tens of thousands of people across Europe staged protests on Saturday against the European Union's planned copyright reform bill.

Munich police said 40,000 protesters turned out under the motto "Save our internet." Organizers said Berlin's protest (pictured above) drew 30,000, with participants walking past the center of Germany's collaborative Wikipedia online encyclopedia. Police put the number of protesters at 10,000.

Some marchers chanted "We're here. We're loud because you're robbing us of our freedom" as they marched through the city, according to DW reporter Oxana Evdokimova.

In Potsdam, banners included the phrase "We are not bots," a reference to robotic-like social media posts.

Backers of the reform bill include a thousand artists and creatives who in a manifesto on Friday warned of a "total selloff" of their copyright entitlements if it did not pass.

"Authors must be paid ... Copyright law has to be clarified for today’s digital world, but not weakened or abolished," they said.

The bill to modernize the EU's 2001 copyright law within the Single Digital Market, adopted mid-February as a compromise between EU heads of state and the European Commission, reaches its legislative finale on Tuesday in the 751-seat European Parliament.

If passed —  just weeks before Europe's May 26 election and after three years of wrangling — member states will have two years to transpose the resulting EU legislation into national law.

But deep rifts prevail among voters across Europe over the bill, especially Article 13, now Article 17 in the revised draft, which critics say will prompt high-earning platforms such as Google's YouTube to use upload filters to block copyright-infringing texts, music and images to avoid expensive lawsuits from copyright holders.

Murder threats have even been made against European parliamentarian Axel Voss, who over three years has been the European Parliament's main negotiator on the bill, Handelsblatt newspaper reported on Thursday.

Voss, an experienced media jurist, is a Bonn-based member of Chancellor Angela's Merkel's Christian Democrats (CDU), which since 2009 has belonged to the parliament's largest grouping, the European People's Party (EPP).

Already in 2018, European media outlets had warned that Europe's "free press" was at risk if the reform failed to end a "grotesque imbalance in how internet giants plunder press publishers' and news agencies' content to generate advertising revenues."

"When someone invents something, writes something or makes something — that's ownership. One cannot simply grab it," said Timmermans.

Initiators of this weekend's "Save the Internet" rallies oppose the EU draft. They say "technically unfeasible" upload filters will be unable to spot legitimate quotes or comprehend parody and satire online, opening a "first step towards Internet censorship."

Backed by a five-million-strong petition, the initiators also question a loophole for young, small firms that would allow them exemption from Article 17's filtering task. At mid-afternoon, organizers posted "the internet is on the street and it is full!"

European parliamentarian Julia Reda, a member of Germany's Pirate Party who sits with the European Parliament's Green grouping, on Saturday retweeted a Greens' message that the bill would "undermine the right to privacy and access to information and freedom of expression."

"Up to now the ballots [within EU chambers] have been very narrow, said Kevin Kühnert, an outspoken junior leader of Germany's center-left Social Democrat (SPD), adding that he saw a "realistic chance" that amendments could emerge during Tuesday's deliberations. 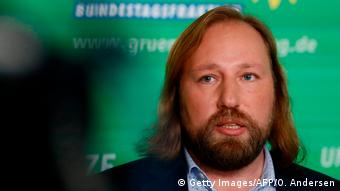 German Youtube star Rezo told the Frankfurter Rundschau newspaper on Saturday that copyright reform was undisputedly needed, "preferably at EU level," but added that law drafters had tended to ignore expert opinion from dozens of digital rights experts and groups.

Another protest supporter, the Greens co-leader in Germany's Bundestag parliament, Anton Hofreiter, on Saturday described the intended EU law as a "real step backward," insisting it should be "renegotiated."

Hofreiter said "shilly-shallying on such an important issue" in Brussels had come about because the Merkel government in Berlin had "still not arrived in the digital age, let alone presented genuine solution suggestions."

On Thursday, Germany's DJV journalists' trade union described the row as a "phantom debate" with "overheated" assertions about the loss of freedoms.

"We want the violation of copyright to cease. This has nothing to do with censorship of the Internet. Anyone who confuses this has not understood freedom of expression," said DJV chairman Frank Überall.

'Over 80 cities against upload filters'