What does the European Parliament actually do? | Europe | News and current affairs from around the continent | DW | 26.05.2019

DW looks at what the bloc's most important legislative body actually does. 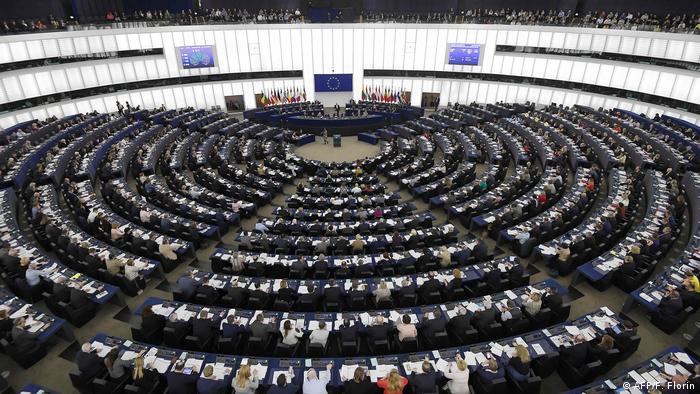 The vast majority of the 751 members of the European Parliament are proud to point out that they are part of a unique body. The parliament, which has been directly elected by citizens in all the member states of the EU since 1979, is the only democratically legitimized supranational institution in the world. The members make laws on behalf of 512 million citizens in all 28 EU member states.

If the United Kingdom leaves the EU, the number of MEPs will drop to 705.

The number of right-wing populists and EU skeptics has risen steadily in recent years. In the 2014 elections, the three groups representing these camps held 20% of the seats. In the previous elections in 2009, the figure was just over half that, at only 11%.

Until now the two largest of the eight groups in the European Parliament, the Christian Democrats and the Social Democrats, have worked together in a sort of undeclared grand coalition. In future, they may need the Liberals or the Greens to join them in order to form a majority. Informal coalitions are important for the smooth running of the parliament. During this last legislative period, it passed more than 1,100 laws, which the national parliaments of the member states then enshrine in their respective national legislation.

The European Parliament is the Second Chamber of the legislature. It is almost on a par with the First Chamber, the European Council, in which the member states are represented. As a rule, the EU Commission's proposed legislation is negotiated between the Council and the Parliament in an accelerated negotiation process (trilogue procedure), then submitted to the plenary session.

The European Parliament is a traveling circus. Many of its members are strongly critical of this. It has three seats: Plenary sessions take place every four weeks in the French city of Strasbourg, the committees and parliamentary parties meet in Brussels, and the parliamentary administration is based in Luxembourg. The parliament has fully operational plenary assembly halls in all three cities. However, the one in Luxembourg is almost never used.

Despite numerous attempts by parliamentarians to do something about reducing this expenditure, they have always been blocked, especially by France, which is categorically opposed to relinquishing Strasbourg as the primary seat of the European Parliament.

Freely elected, but not equal

More than 200 national parties are represented in the multilingual European Parliament. They are currently organized into eight parliamentary parties or groups. Electoral law is not standardized; all member states organize elections according to their own rules. Some have a threshold clause to exclude tiny parties that get, say, below five percent of the votes. Others — including Germany — do not.

Read more: Germans to choose from 41 parties in European elections

Germany's Federal Constitutional Court has criticized the fact that although the European elections are free and general, they are not "equal" in the legal sense. The vote of someone in the small state of Luxembourg, for example, counts more than that of a voter in the largest state, Germany. Luxembourg with its population of 600,000 sends six MEPs; Germany with its population of 80 million sends 96. Measured in terms of the number of eligible and actual voters, that means Germany has far too few.

Voters' interest in this legislative body, unique in all the world, has been waning steadily since 1979. Back then, turnout was still at 63% across the EU. In 2014, the average turnout was just 42%.

The Eurpoean Parliament has released its final voter projection ahead of its May 23-26 European elections. If Britain takes part after all, euroskeptic groups are set for a significant boost. (18.04.2019)

The EU's budget chief says Germany will have to supply a cash injection of several hundred million euros to the bloc in the event of a no-deal Brexit. A messy departure will leave billions missing from the EU budget. (05.04.2019)

When Europeans head to the polls next month to elect a new Parliament, most will vote based on whom they oppose rather than whom they support, according to a new study. Extremist, populist parties stand to benefit. (26.04.2019)