Euroskeptic, anti-immigrant parties team up for EU election | Europe| News and current affairs from around the continent | DW | 05.04.2019

The AfD and other euroskeptic parties have formed a bloc ahead of the European Parliament elections. Various anti-immigrant youth organizations recently gathered in Rome, giving a sense of what might be to come. 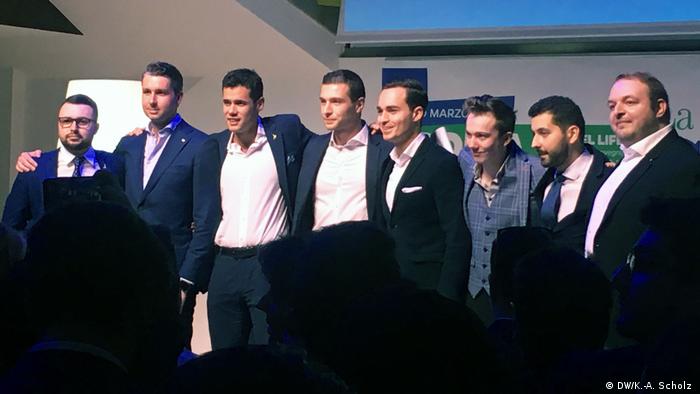 Euroskeptic parties are joining forces ahead of the elections for the European Parliament in May. A few days ago, about 500 young members of such parties met in Rome. The summit was organized by the youth wing of Italy's anti-immigrant League party, which hopes to win a large share of the vote. Surveys indicate that Italian Interior Minister Matteo Salvini's party could emerge victorious in Italy. And for months, he has been working to unite Europe's various right-wing populists. 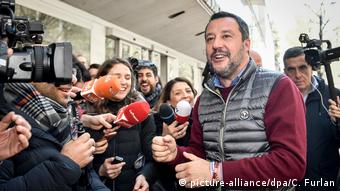 From the outside, nobody would have guessed that hundreds of young far-right activists from across Europe were gathered in an upscale hotel in Rome's Via Palermo. Outside the establishment, there were neither protests nor roadblocks that could have indicated what sort of event was being held inside.

The summit was attended by the heads of Belgian, French, German and Austrian far-right youth organizations. Among them: Damian Lohr, who a year ago took over as the head of the youth wing of the Alternative for Germany (AfD) party.

Currently, Europe's right-wing populist parties are spread across three different groups in the European Parliament. They are members of either the European Conservatives and Reformists (ECR), the Europe of Nations and Freedom (ENF) or Europe of Freedom and Direct Democracy (EFDD) bloc. In the past, they struggled to cooperate for a number of political and personal reasons. But now, with just weeks to go until the European parliamentary election, Europe's nationalists want to overcome their differences and join forces. Germany's AfD has already sent out invitations for a press conference to be held on the matter on April 8. It will again be hosted by Italy's League party. AfD party leader Jörg Meuthen is set to attend the event.

Media reports indicate up to 20 different political groups and parties intend to join the new "Alliance of European peoples and nations." And Salvini has planned an election campaign that will even take him to Germany. He has already been to eastern Europe in previous weeks. It is unclear if Poland's ruling Law and Justice (PiS) party will join the new right-wing group, as it has refused to comment.

Europe's far right hopes to become the third- or even second-most powerful group in the European Parliament. It is, however, increasingly difficult to project how the election will turn out — in particular, because it is unclear whether Britain will participate. Either way, Europe's nationalists could win up to one-fourth of all parliamentary seats. 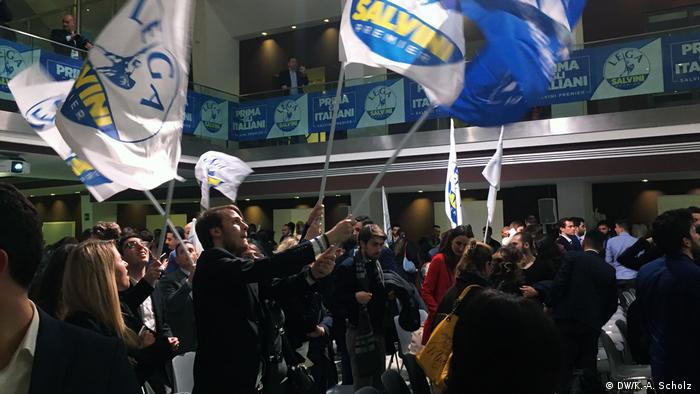 The Rome summit of right-wing youth organizations, meanwhile, gave a sense of what might happen when Europe's far right unites. Vast League party flags adorned the scene, AC/DC's "Thunderstruck" could be heard blaring out of the PA system, and iconic sites from various European capitals were projected onto a huge screen.

Davide Quadri, the League's youth branch international coordinator, welcomed attendees to the summit, telling them his organization's goal was to "Make Europe great again." Speakers from across Europe then took to the stage, lashing out against Brussels, multiculturalism and immigrants. All of them extolled the virtues of "pride" and "patriotism," stressing that the EU must be revolutionized. An hour into the event, Damian Lohr's moment had come. He railed against European Commission President Jean-Claude Juncker, calling him a clown, and branded German Chancellor Angela Merkel a witch.

But compared to Bart Claes of Belgium's Vlaams Belang Jongeren, Lohr's criticism seemed almost tame. Claes said that nations must never apologize for their history. Lohr looked unfazed by this demand, which not even extreme AfD members would dare utter in public now that Germany's domestic intelligence service is on their case.

Three hours later, the summit came to a close. Many attendees headed up to the stage to snap selfies with their political idols. Lohr and others were happy to oblige. 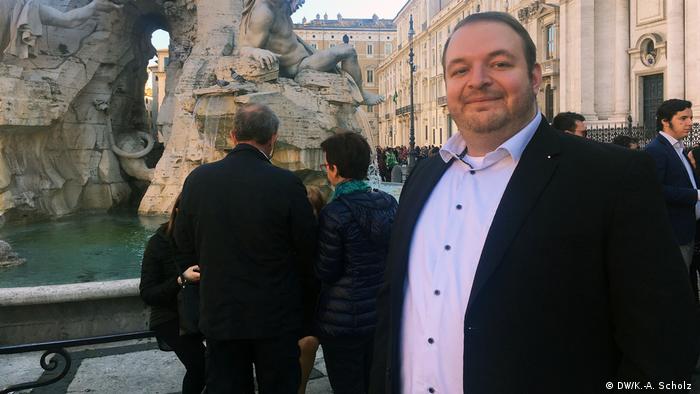 The next day, while strolling through the Italian capital, Lohr told DW that he was surprised just how emotional the youth-wing summit had been. He seemed almost intoxicated by the atmosphere.

Was he worried that feelings of pride and patriotism, as extolled at the summit, could someday give rise to an aggressive nationalism that could also take hold of Germany? Lohr took a moment to think and then replied that thanks to mutual respect and a sense of individual responsibility, there was no danger of resurgent nationalism.

Read more: Right-wing populism is EU's elephant in the room

A little while later Lohr arrived at Rome's Piazza Venezia square. He marveled at the gargantuan statue of Victor Emmanuel II and said: "Wow — Brandenburg Gate could fit in there several times over!"

Rome appears to have become Europe's new right-wing populist epicenter. The Eternal City, with its countless imperial monuments, could not be more different to Brussels, with its modern architecture of glass and steel. The Roman Empire has had a lasting effect on Europe for two millennia — now Italian populists want to reshape the continent in their own image.

Zuzana Caputova has been elected president of Slovakia, by a large majority. Her win highlights a trend in the region that has received little attention to date: the desire to put an end to populism and demagoguery. (31.03.2019)

After an incident involving abusive asylum-seekers was answered with "right-wing vigilante groups," an idyllic Bavarian town has become a populist flashpoint. Peter Hille says there must be more faith in the rule of law. (03.01.2019)