Watching Italy's populist leaders behave like bulls in a china shop is hard to bear. Their escalating dispute with France is toxic for the EU, and we shouldn't let them get away with it, says DW's Bernd Riegert. 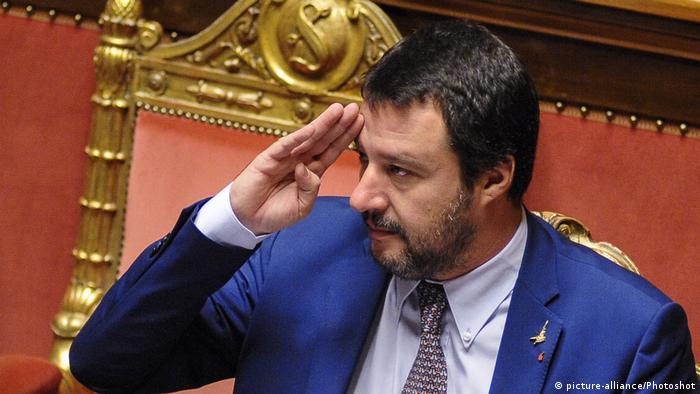 French President Emmanuel Macron is tired of the constant provocation coming from Italy's populist government. For a long time, he did not respond. Now he has temporarily withdrawn his ambassador to the country. The Elysee Palace issued a sharp statement on this punitive diplomatic action — something that shouldn't happen between fellow European Union member states. The basic message was that relations between the governments in Paris and Rome have reached their lowest point since the Second World War.

The populist boasters' reaction was to be expected: They have been making fun of "Napoleon" and the "crazy champagne drinker." Macron has become a great target during the current regional election campaign in Italy, as well as the European Parliament elections in May. The respective leaders of the anti-establishment Five-Star Movement and far-right nationalist League party, Luigi Di Maio and Matteo Salvini (pictured at top), have found an ideal enemy in France's liberal, pro-EU president. Unfortunately, Macron has shown himself willing to play the game, though he could hardly help it after Di Maio and Salvini openly teamed up with his domestic enemies in France: the yellow vest protesters and far-right populist Marine Le Pen.

Italy's populists are doing what populists do: They are telling people what they want to hear, stirring up emotions, spreading false allegations and fomenting hatred. The absurd accusations against France in general, and Macron in particular, have fallen on fertile ground in Italy. Even before the changes of government in Rome and Paris, many Italians felt inferior to the French, who they perceived as arrogant. The absurd proposition that the EU prefers the big brother in the West and has been turning a blind eye when it comes to France's national debt has been around for a long time.

It is not surprising that Di Maio and Salvini, currently campaigning against each other in Italy, are now trying to outdo each other in terms of bashing France. What is depressing is how successful the shrill-toned populists are: Around 60 percent of Italian voters seem to be following these pied pipers. Macron, however, is now in a weak position in his own country. His approval ratings have hit rock-bottom, his reform course has stalled and he is now also arguing with his partner, Germany, over the Nord Stream 2 gas pipeline.

Italy's political gamblers cannot be expected to show respect and decency. They don't care about the damage they are doing to Franco-Italian relations in the medium term. They are disregarding business associations' warnings not to strain the very close economic ties between the two countries. Italy is heavily indebted in France. There are numerous cross-border investments. There are strong connections, for example with the airline Alitalia, with shipyards, transport projects, telecommunications and energy supply. Is all this now to be put in jeopardy?

The way the two governments are treating each other is unworthy of allied EU members. German Chancellor Angela Merkel could step in as a mediator. So far, she has held back from criticizing the populists in Rome. Her interior minister, Horst Seehofer, however, was all too willing to get into bed with right-wing nationalist Salvini when it came to migration policy. There is reason to fear that neither side has an interest in settling this artificially manufactured dispute before the European Parliament elections. It is simply too effective as campaign ammunition. The duel is on between nationalists and progressives.

This polarization is, of course, toxic for the EU, which is based on consensus and compromise. Member states must work together and not fall back into nationalistic squabbling. What will happen now that the French ambassador to Italy has been recalled? Will diplomatic relations be terminated? Will there be mobilization? A declaration of war? Of course not! Salvini and Macron should meet for a TV debate and present their diametrically opposed understandings of politics to the people.