Opinion: Right-wing populism is EU's elephant in the room

If we want to combat rampant right-wing populism in Europe, we must above all address the issue of migration, says DW's Christoph Hasselbach. 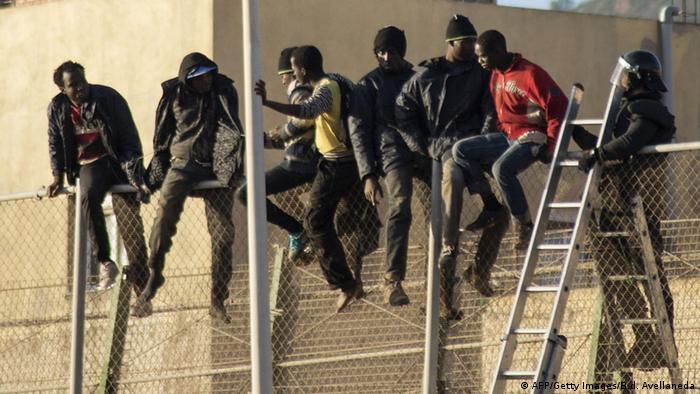 Where has the European spirit of cooperation and reconciliation gone, at the turn of the year 2019? You only have to look at the situation in a few member states to come to the conclusion that the EU is in an extremely bad state.

Britain wants to leave the EU altogether, possibly completely unregulated; in France, former beacon of light, President Emmanuel Macron has already lost his shine. Ordinary citizens in yellow vests are taking to the streets there in droves, and some are not shying away from violence. Extremists from the right and left are trying to take advantage of the mood.

Italy's populist government at first openly opposed the EU Commission in the budget dispute. Shortly before Christmas, the Commission made a big move towards meeting Italy's needs, renouncing a deficit procedure that was due and selling it as a victory of reason over confrontation. Rome's audacity should soon set a precedent.

In the dispute over the rule of law, the governments of Poland and Hungary also only give in when and exactly as much as is unavoidable. In Spain, one of the last bulwarks against right-wing populism, the strictly right-wing Vox party has now made strong gains in the region of Andalusia. It pays homage to the country's former dictator Francisco Franco.

Concern about the European elections

Right-wing populism is the big phenomenon in Europe: Right-wing parties are on the rise in practically every EU country. Some of them are already form part of governments, for example in Austria and Italy. The citizens of these countries don't seem to mind.

Germany has not been spared either. Approval ratings for the right-wing populist Alternative for Germany (AfD) are not declining even though its core issue, that of immigration, is less salient. There are now far fewer migrants and refugees coming to Germany than at the height of the refugee influx in 2015-16, and Chancellor Angela Merkel has long since abandoned her liberal refugee policy. The AfD could become the strongest or second-strongest party in the upcoming elections in Germany's eastern states in autumn.

The most significant indicator for the entire EU will come in a few months' time with the European elections. All surveys indicate that right-wing populist and anti-European parties will then be represented even more strongly in parliament than they already are. The reasonable and moderate forces will then have an even harder time.

Merkel and the consequences

The reasons why voters turn more politically radical are different in each member state: In France, it is the president's self-importance. In Spain, Vox's success is also a reaction to Catalan separatism. In Italy, the mood against the EU is fuelled primarily by dissatisfaction with the economic situation, which of course won't be improved by populism.

But the common theme in all countries is migration that is largely uncontrolled and unwanted. As long as moderate politicians do not find an answer, this mood is unlikely to change. Three years ago, Angela Merkel drove it to extremes when she said it was not possible to close the borders and that there was no upper limit for asylum. She wanted to strong-arm the whole EU into going along with her misguided policy and has thus completely isolated herself — an approach that still reverberates throughout European politics.

If we want to improve the state of the EU, this is exactly where we need to start. People are longing for reassurance that European countries — and the EU as a whole — will regain control over migration.

Merkel on the need for a joint European response to migration

Australia joins US in diplomatic boycott of Beijing Olympics 1h ago