France′s ′yellow vests′ and the Russian trolls that encourage them | World | Breaking news and perspectives from around the globe | DW | 15.12.2018 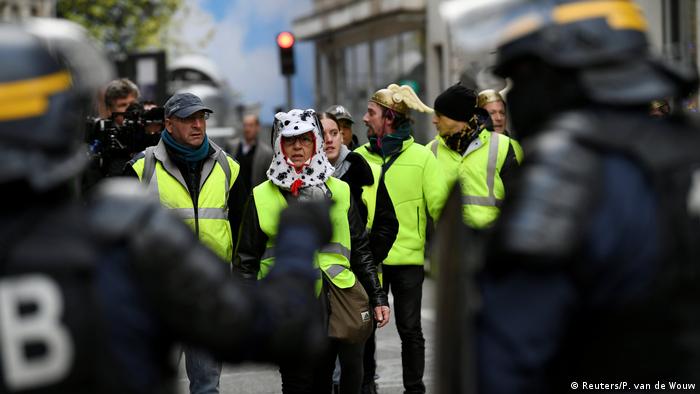 British and US media outlets reported in early December that Russian social media trolls were apparently involved in stoking the French "yellow vest" protests, for instance by disseminating disinformation like fake protest pictures.

The news outlets cited information provided by the Alliance for Securing Democracy (ASD), an initiative by the German Marshall Fund (GMF) that monitors Twitter accounts thought to be under Russia's influence.

For roughly a week, the most popular topic among these Russia-affiliated accounts were the yellow vest protests in France (#giletsjaunes). The ASD website features a dashboard that gives an overview of the activities of some 600 such Twitter accounts, indicating which hashtags and topics are trending and what sources are cited.

The names of the actual accounts, meanwhile, are kept secret. The ASD website identified three kinds of Twitter accounts: those that are openly pro-Russian or are linked to the Kremlin, those that are operated by troll factories within and outside Russia, and finally those that are run by individuals around the world seeking to "amplify" Russian issues. The Twitter accounts almost exclusively cite Kremlin-backed media outlets like RT and Sputniknews.

Most of these Twitter accounts focus on US politics, explains GMF social media expert Bret Schafer. He stresses that most of them tweet in English, meaning that their influence on the yellow vest protests is actually limited. "What these accounts do is highlight certain topics to discredit the West, and cast liberal democracy in a negative light."

Maxime Audinet of the French Institute of International Relations (IFRI) concurs: "Russian information campaigns should not be seen as instruments that aim to mobilize new yellow vest protesters or to encourage violence." Instead, he says that "Russian reporting seeks to further polarize public debate and to create the impression in France and abroad that the yellow vests have deeply divided France and brought it to the brink of civil war."

Tatiana Stanovaya, a political analyst based in France, shares this interpretation. She says Russia is capitalizing on French President Emmanuel Macron's political weakness to spread information suggesting "the decline of Europe, a crisis of democracy and growing opposition against the establishment." However, she "would not say this is having much of an effect."

Read more: Will Macron listen to the 'yellow vests'?

"Russian social media activities primarily focus on President Macron, not the yellow vests," says Ben Nimmo, an information defense expert at the Atlantic Council's Digital Forensic Research Lab. In November, he published a detailed report on the "French Operation" conducted by suspected Russian social media trolls. While the report examines the time before the yellow vest protests, it does contain insightful details.

Together with some of his colleagues, Nimmo was able to reconstruct some details about the blocked accounts. Most of these were in English, though 12 Instagram accounts were run in French. They had some 76,000 followers, of which 12,400 were based in France, according to Facebook. Most had apparently been set up in mid-2017. "The accounts were made to look as if they were run by different kinds of people: one appeared to be run by a nationalist, another seemed like an ultracommunist. Some pretended to be run by African women," Nimmo explains. He says that while most accounts disseminated "harmless" information, five of the 12 Twitter accounts attacked Macron verbally and by spreading derogatory images. One photo montage, for example, depicted Macron as a slave driver.

Facebook is not revealing who actually controls these accounts. It said the activities may be linked to the Internet Research Agency [Eds.: a Saint Petersburg-based company known in western media as a troll factory], although that was not certain. Ben Nimmo believes is it "likely" the accounts were "operated from within Russia." His assessment is that this is an "operation" in its early stages. "President Macron was the most obvious target," says Nimmo. Adding that "it looked like an attempt to undermine his authority and to get as many user groups as possible to personally dislike him." He says Russia has targeted Macron on social media in the past.

Nimmo thinks there were so few accounts because Russian trolls were not proficient enough in French, and because the "operation" was just starting. He recalls that Russian online activities in the US started about two and half years ahead of the 2016 presidential elections. That helps put the French operation into perspective. "They did not focus on the yellow vests, because usually such operations pursue a long-term target," he explains. And that target, he says, is Macron himself.