France revolts against Emmanuel Macron and the ′elite′ | Europe | News and current affairs from around the continent | DW | 03.12.2018

Representatives of the "yellow vest" demonstrators have called off talks with the French government, though it was doubtful they would've ended the protests. The gap between the people and their government is deepening. 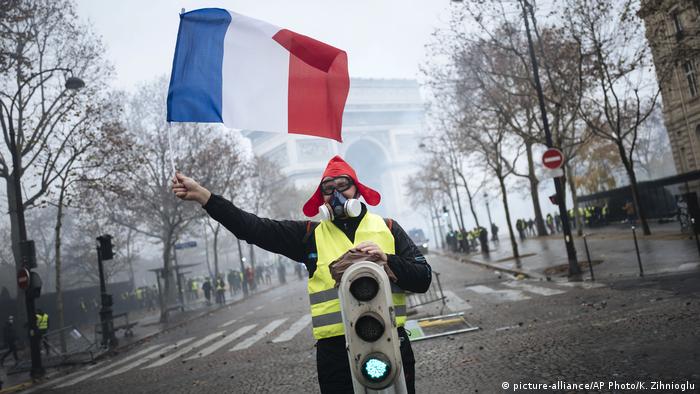 Protests have taken place across France, including in the capital, Paris

Still under the impression of Saturday's dramatic events, the prefect chose his words to the public with care. "There was the will of the protesters to kill people," said Yves Rousset, who represents the French state in the department of Haute-Loire.

This past weekend, angry "yellow vest" protesters burned down his workplace, the prefecture in the tranquil town of Le Puy-en-Velay. Demonstrators hurled bricks through the windows and lobbed Molotov cocktails into the building. People were shocked at the unbridled protests in a pilgrimage town that is seen as the heart of Catholic France. Usually, political shockwaves from the capital are not noticeable that far away, more than 500 kilometers (310 miles) south of Paris.

Things are different these days. A largely uncoordinated wave of protest has spread across the country, and quickly. From Brest to Strasbourg, from Lille to Marseille, demonstrators have blocked tollbooths, roads and fuel depots and gathered for protest marches, clad in yellow safety vests. The movement could continue to pick up speed. On Monday morning, protesters supported by demonstrators wearing yellow vests blocked about 100 schools nationwide in protest to the government's education policy.

The French media are pondering the government's race against time. Prime Minister Edouard Philippe and his ministers face a difficult task: they have to come across as tough but at the same time willing to engage in dialogue. The protests have been so intense in the capital and other cities for two weekends in a row that tourists spoke of civil war-like conditions. It is a declaration of political bankruptcy for Interior Minister Christoph Castaner, who has been in office for just one-and-a-half months. Under all circumstances, he and his overburdened police forces feel they must prevent a third weekend of chaos.

However, representatives of the "yellow vest" movement said Monday that they would no longer participate in Tuesday's planned talks with Philippe, citing "security reasons." Philippe's office had also said on Monday he would announce "measures" in favor of the protesters.

Anger at the establishment

Emiliano Grossman, a political scientist at the Paris Sciences Po research university, believes the government needs to engage directly with the protesters, who are successful for partly contradictory reasons. On the one hand there is the old contrast between the Parisian Bobos — the "rich left" who are committed to environmental protection — and the conservative people who live on the outskirts of the cities and feel neglected by the government, he said. On the other hand, there are the many people annoyed that very quickly after taking office, Macron abolished the wealth tax — which only the rich pay, Grossman added. "Now the eco tax is being raised, a tax everyone will have to pay," he said, adding that these days, neither the left-wing nor the right-wing in France feel represented by the Parisian establishment.

Basically, Macron is right back where he started his presidency, when 24 percent of the voters backed for him in the first round of the election. A year-and-a-half later, his popularity hasn't increased much.

Foreign leaders are also watching the French president's trial by fire. "Not to overstate the point, but if other countries get the impression that this president hasn't got his country under control properly, that is bound to affect his credibility and assertiveness on the international stage," said Henrik Uterwedde of the Franco-German Institute in Ludwigsburg.

Riots in the streets

The domestic situation is complicated by the fact efforts at political mediation have largely failed. The trade unions and political parties that used to dominate the scene are in a deep crisis. A year-and-a-half after their disastrous election defeat in the presidential and parliamentary elections, the Socialists and the conservative Republicans have yet to recover. 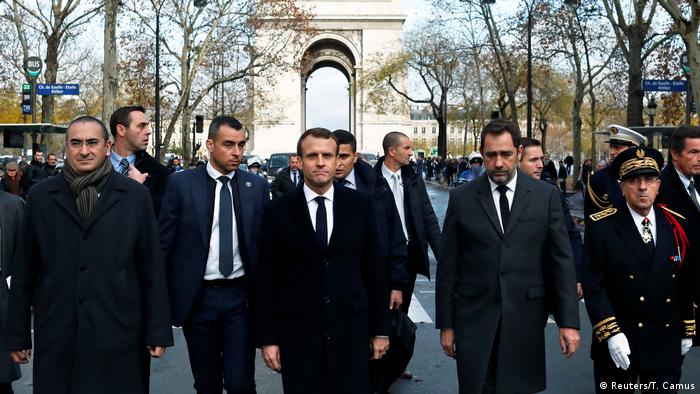 And the president's party isn't doing well, either. At the weekend, La Republique en Marche elected a new chairman, Interior Minister Castaner. The 52-year-old is a Macron confidante, but he is largely unknown to the public. The movement has no profile, said Uterwedde. It it has not managed to structure itself "in a way that it can stand by Macron as a friendly but also critical partner and absorb the people's concerns, needs and demands." Protests in the street appear to many people to be the only way to correct a seemingly omnipotent president who wants to hold on to his reform course, but must instead make concessions.

No relief in sight

The demands from the streets are for the most part uncoordinated. The movement began as a protest against higher diesel and gasoline taxes, but it has since expanded to include demands for Macron's resignation, new elections and increasing purchasing power, all of which are splashed across the banners of protesters aiming for more structure. "One of the demands they will probably return to is raising the minimum wage, which probably makes no sense from a macroeconomic point of view," said Grossman.

However, it appears the political dynamics in Paris are difficult to predict these days.

French government sources have indicated that a fuel tax hike, which has sparked violent protests, will be suspended. Prime Minister Edouard Philippe is expected to announce the move later on Tuesday. (04.12.2018)