At least 75 gas stations have run out of fuel due to blockades at major depots, French energy giant Total said. The situation is likely to get worse if protests don't stop soon, according to officials.

A company spokesman said that if the blockade weren't lifted soon, more petrol stations could run out of fuel. In the region of Brittany, local officials have considered imposing restrictions on how much gas motorists can buy to prevent more stations from going dry.

France has been gripped by anti-government protests since French President Emmanuel Macron introduced sweeping measures to combat climate change, including a fuel tax hike. On Saturday, riots broke out in Paris, leaving scores injured and costly devastation in its wake.

Macron 'won't give in'

Protesters believe Macron needs to withdraw the reforms, citing high living costs in the country. But the government has refused to back down. Instead, Macron said last week that the protests show "that we shouldn't change course because it is the right one."

"I understand the demands of these citizens, but I won't give in to those who want destruction and disorder," he said.

French Finance Minister Bruno Le Maire said that Saturday's violent protests in the capital were having knock-on effects to the economy. "The impact on the French economy was serious," Le Maire said, noting that some sectors reported a decline in sales of up to 25 percent. 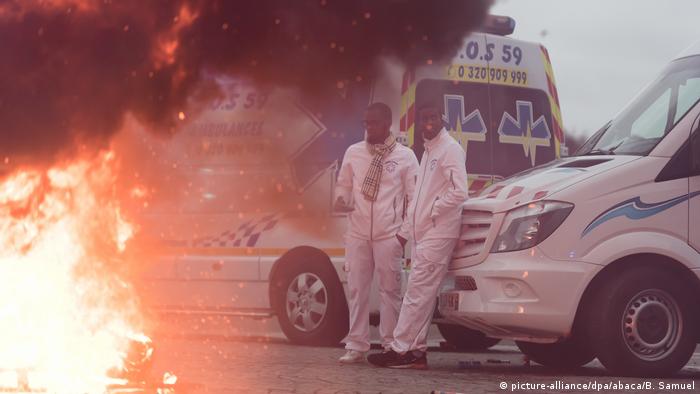 Days after violent protests, ambulance workers took to central Paris on Monday to protest against reforms

French Prime Minister Edouard Philippe convened crisis talks on Monday to respond to the violence that erupted in Paris over the weekend. He is meeting with party leaders and protest organizers to find a way forward.

German Foreign Minister Heiko Maas said he was confident that calm would return to France, adding that the country "is known for its special protest culture."

"France is needed in Europe, and we know that focusing on such disputes in a country of course consumes energy, but that is completely normal," Maas said.

Read more: French President Emmanuel Macron: Is the honeymoon over?