France has suspended a planned fuel tax hike which has sparked violent protests. In a televised address, the prime minister called for an end to the demonstrations, saying "no tax deserves to risk unity of the nation." 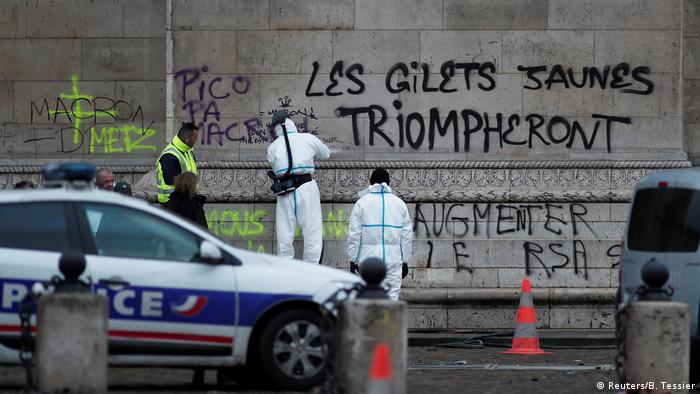 French Prime Minister Edouard Philippe said on Tuesday that a fuel tax increase planned for January 1 had been suspended for six months. The move to end violent "yellow vest" protests against the measure was announced during a televised address.

Philippe called for an end to the violence, saying "no tax deserves to risk unity of the nation."

"It's a first step, but we will not settle for a crumb," said Benjamin Cauchy, one of the leaders of the protests.

Marine Le Pen, leader of the far-right party National Rally (formerly the National Front), tweeted: "A moratorium on taxes is being considered. But a moratorium is only a postponement."

Republican Senator Bruno Retailleau described the moratorium as a reprieve and "absolutely inadequate." He said the French people called for "a cancellation."

Police 'violence' probe opened
Meanwhile, the Paris Public Prosecutors Office said it has started an investigation into "violence by persons holding public authority" after a video was broadcast on social networks showing a man apparently being beaten up by eight police officers on Saturday.

Over the weekend, protesters set fire to dozens of cars and several storefronts along the Champs Elysees. The Arc de Triomphe was sprayed with graffiti.

French President Emmanuel Macron had denounced the protests and vowed a tough response.

"I will never accept violence," Macron said from the G20 summit in Argentina. "No cause justifies that authorities are attacked, that businesses are plundered, that passers-by or journalists are threatened or that the Arc de Triomphe is defiled."

The protests descended into the worst urban violence France has seen in a decade. Police used water cannon to quash the unrest.

Philippe canceled a planned trip to the COP24 climate conference in Poland on Sunday to meet with Macron over the unrest.

The proposed tax would have raised gasoline price by 4 euro cents per liter. Gasoline currently costs about 1.42 euros ($1.62) a liter in Paris, slightly more than diesel.

Planned rises in electricity and gas prices, and plans to tighten safety checks on vehicles were also suspended.

"These decisions, with immediate effect, should return calm to the country," Philippe said, calling for a "real dialogue on all the concerns expressed in these last weeks."

Protests over rising taxes are planned in the French capital, Paris, for a third weekend. Prime Minister Edouard Philippe is expected to meet with some protesters for the first time since the rallies began. (30.11.2018)

Delegates said they were being threatened by hardliners who warned them against entering into negotiations with the government. Measures in favor of the protesters are expected. (03.12.2018)