With Brexit postponed, the UK is holding European Parliament elections. Supporters of Nigel Farage's new party are hoping for a strong showing. DW's Birgit Maass reports from Wales on an unusual campaign season. 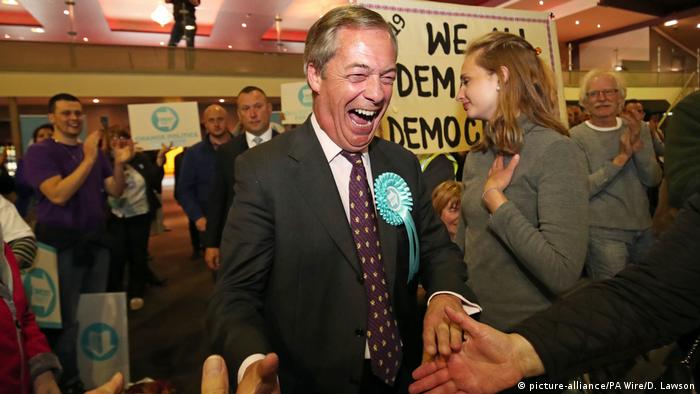 Nigel Farage has traveled to Wales to campaign on behalf of his new Brexit Party ahead of the European Parliament elections. An exuberant crowd awaits him in the small coastal town of Newport. "I´m back!," he tells his supporters, with his last word drowned out by loud applause. Hundreds of Farage fans have come here today from the surrounding area to see their political idol in person.

Farage's new party could emerge as the strongest British party competing in the European Parliament elections. In Wales, he tells his fans that his political movement wants nothing less than a "rebirth" of British democracy. Brexit was merely the beginning of this renewal, he says, accusing other UK lawmakers of failing to actually go through with the move.

By and large, Farage supporters feel they have been betrayed by the British political class. Many people in Newport voted for the Conservative Party in the last elections, yet now feel that Prime Minster Theresa May and her government are not delivering as promised.

Monima O'Connor, who lives in a tiny village in western Wales, is one of those people. She cannot fathom why after all this time Britain still has not managed to emancipate itself from the much maligned "Brussels bureaucrats." Together with her husband, O'Connor runs a shop selling sanitary goods. As they only sell to domestic customers, she does not see the point of Britain being in the European Union. 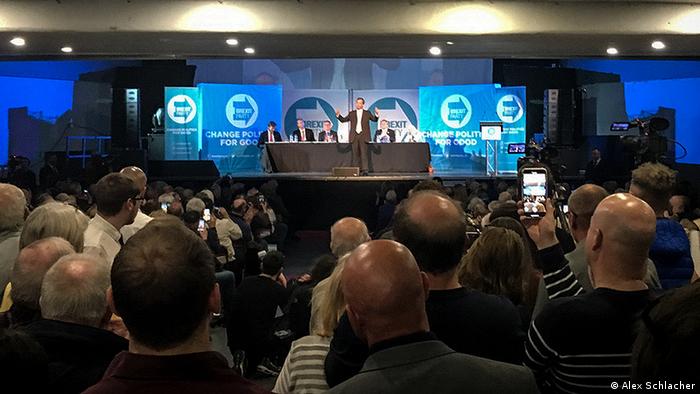 Many Farage fans like her feel Prime Minister May has "betrayed" them. They want Britain to leave the EU as fast as possible, no matter the cost.

Farage draws roaring applause from the crowd when he rails against Westminster politicians. He accuses them of just serving themselves — a reproach he used to only direct at Brussels lawmakers.

'We must stop Farage'

Meanwhile, an hour's drive further south in the city of Bath, Rachel Johnson is campaigning for her new party, Change UK. She is former Foreign Minister Boris Johnson's sister, and it's the first time she has run for a seat in the European Parliament.

Rachel Johnson is adamant that "we have to stop Farage" and has called for a second Brexit referendum. She says this would be paramount to put an end to the protracted political chaos.

Frustration over handling of Brexit

Change UK is a pan-party alliance of British lawmakers from both the Labour and Conservative parties. What unites them is their frustration about their respective parties' inefficient way of dealing with Brexit. That's why they're campaign for a second referendum. This is the first the time the party has competed in the European Parliamentary elections. 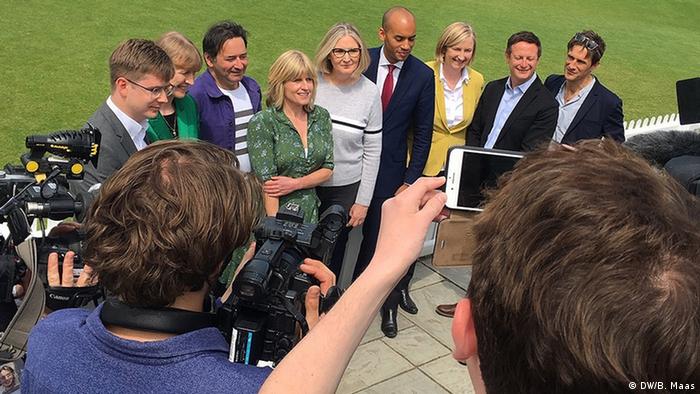 Johnson and Change UK are pushing for a new Brexit referendum

But unlike Farage's exuberant campaign event in Wales, far fewer people have turned up to hear Johnson speak in Bath. She says she can understand why many Brits are fed up with the status-quo and now want to finally leave the EU because they're sick and tired of the topic.

Competing forces
MEP and former Belgium Prime Minister Guy Verhofstadt, meanwhile, is campaigning on behalf of the Liberal Democrats in central London. "We want to be the alternative to all nationalists and populists in Europe," he says.

However, polls show that Farage's Brexit Party could win up 35% of the vote, while the Liberal Democrats are projected to take just 16%. And just 5% of the electorate will, if the polls are accurate, cast their ballot for Change UK.

Pro-European parties do not look like they have a chance against Farage's party. And instead of joining forces, they are competing against each other, arguing that Brexit is the wrong response to real issues that need to be addressed.

Farage's message, in contrast, is simple and catchy. He promises to make Brits proud of their homeland again. And lashes out against "career politicians," even though he himself has spent many years working as a Brussels lawmaker.

After the Newport campaign stop draws to a close, many attendees join Farage's party. And Monima O'Connor grabs a Farage poster, which she wants to put up in her village. Because, as she says, his Brexit Party is "wonderful."