India elections — Narendra Modi′s fandom persists despite spotty record | Asia | An in-depth look at news from across the continent | DW | 15.05.2019

India's ruling BJP party has mostly succeeded in turning the ongoing parliamentary election into what seems like a presidential one — with PM Modi as its most prominent candidate, backed by a devoted following. 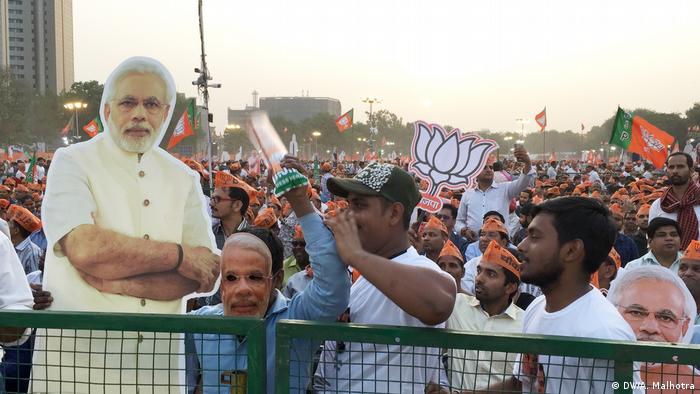 Amid breathtakingly polluted air and a sun beating down through the smog, the crowd at New Delhi's Ramlila Ground would have been forgiven for being low-energy. But as they gathered over the course of a few hours the atmosphere only grew more festive.

Regular cries of "Bharat Mata ki Jai" (Hail Mother India) rang out, as well as chants of support for Prime Minister Narendra Modi, the man they came to see. Modi has addressed more than 110 rallies since campaigning for India's general election began in mid-March. It often means he goes to multiple rallies in a day, which can leave crowds waiting for him to arrive from the previous event.

But while they waited for him in Delhi, he was also everywhere they looked. A sea of cardboard cutouts of the prime minister bounced above a crowd in which many adorned their faces with Modi masks. When Modi's voice finally bellowed out across the adoring crowd, it sent them into a frenzy. "Narendra Modi ji is the first prime minister of India who possesses divine knowledge," said Ramesh Sharma, a 58-year-old rally attendee, using an honorific for Modi. 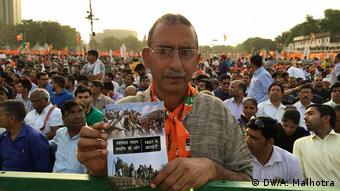 It's a lofty claim, but one that speaks to the level of worship and idolization many supporters have for Modi. Religion is a key element of the prime minister's persona — his Bharatiya Janata Party (BJP) is a Hindu nationalist entity, and Modi is often portrayed as pious, disciplined and working in service of the country. Religious undercurrents are never far from the surface at a BJP rally.

But Sharma has many other reasons for supporting Modi too. "There isn't just one reason. He has a hundred virtues," he said. As he spoke, he held up a 40-page book in support of Modi. Its cover makes reference to 1857, the year of a mutiny by Indian soldiers against British rule. India eventually won independence 90 years later.

But one political dynasty — the Nehru-Gandhi family — has ruled India for more than half the years since, and many Modi supporters believe the family has held the country back. "Our struggle for independence has been going on since 1857 and we will be free and independent if Modi wins a second term as prime minister in 2019 and we get rid of the Gandhi family," said Sharma.

It's a theme often pushed by Modi himself, contrasting his own humble beginnings with the Nehru-Gandhis. His target is 48-year-old Rahul Gandhi, today's face of the dynasty as the prime ministerial candidate for the Congress party. Gandhi's father, grandmother and great grandfather have all served as prime minister.

At Modi's rally in Delhi, the prime minister blamed Gandhi's family for creating a culture of dynastic politics. And earlier this week, Modi took a direct shot at Gandhi saying his family connections may have given him leadership of the Congress party, but they don't "bring vision and wisdom."

Gandhi was already the face of the Congress during the 2014 general election when the party took a severe drubbing at the polls, securing an embarrassingly low 44 of the 543 available seats in the lower house of India's parliament. The party has also lost several important state elections over the past five years. Despite these setbacks, Congress is still widely seen as the biggest opposition party to the BJP, and Gandhi was also in Delhi campaigning last week.

At a rally the day after Modi's, Gandhi was on the attack, repeatedly calling Modi a "thief." Among the issues over which Gandhi regularly makes this claim are two flagship economic policies of the Modi government — a massive "demonetization" exercise in 2016 that banned 86% of currency in circulation overnight, and the rollout of a new national Goods and Services Tax (GST). Both were at least partially aimed at combating corruption and tax evasion, but also hit small businesses hard. 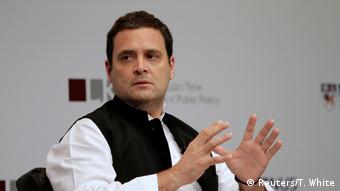 Gandhi said: "He has taken money from your pocket. Ask any trader or shopkeeper, 'how much money has Narendra Modi stolen from your pocket through demonetization and GST?'" Gandhi also frequently references a controversial fighter jet deal with France, and has accused the government of corruption in the awarding of the contract to a prominent Indian industrialist.

Though Gandhi's Delhi rally lacked the size and verve of Modi's, his claims did resonate with those in attendance. The most common slogan shouted throughout the rally — "Chowikdar Chor Hai" — translates to "the security guard is a thief," a reference to Modi branding himself as a guard of the nation.

"He's a thief. We are saying this too. We can give you many examples of corruption taking place," said Manoj Kumar Sharma, who runs a motor shop opposite the site of Gandhi's rally. "We haven't understood Modi's policies. What was the benefit of demonetization? Please tell me that."

Manoj Kumar Sharma isn't the only one who has felt the financial pinch during the Modi years. "Modi's a fraud. He lies. He said he'd do things for the country but until now I haven't seen anything," said Manish, a taxi driver who dropped off a passenger to Gandhi's rally last week.

Manish called Gandhi a "good man" and said he supports Congress. But despite being just outside the rally site he wouldn't still attend because he couldn't afford the time off the road. "Ever since the Modi government came to power, it's been very difficult to make money. If I go to the rally what will I eat at home? How will I pay my children's school fees?" he said.

Such sentiment fits with the feeling of many political analysts who believe the most likely issues to hurt Modi at the polls will be economic. Modi's image when it comes to religious harmony has also been called into question throughout his time in office, including in Time Magazine's recent cover labeling him "India's Divider in Chief."

But despite all the criticism, Modi still enjoys great personal popularity. While his rally in Delhi was full of masks with his photograph, no such Gandhi masks were seen at the Congress event. It's a testament to the extent the prime minister and his party succeeded in turning India's parliamentary election into what seems like a presidential one - with Modi as the most prominent candidate backed by a devoted following akin to a rock star.

"None of these things happened," said Ramesh Sharma, the Modi supporter, when asked about all the complaints about the economy before quickly shifting the conversation to praise the prime minister. Another man, Santosh, joined in. "Previously, the thinking was that only a person with money could do anything," he said. "Modi has created belief and changed the thinking [of the public]. And when the thinking changes, growth and development will come."

India has usually adopted a "non-aligned" foreign policy, but since Prime Minister Modi came to power in 2014, New Delhi has shown more assertiveness in international relations, particularly in its dealing with Pakistan. (06.05.2019)