India elections: Will women voters be a game changer?

Although women have held powerful government positions in India, their political participation in the country has largely been curtailed by a male-dominated system. Will the ongoing general election bring about a change? 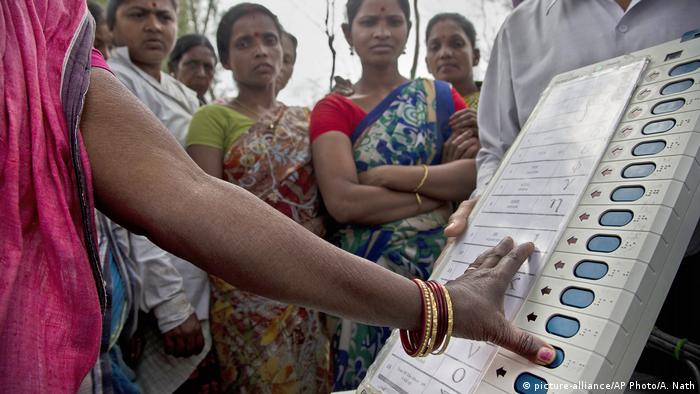 Around 625 million women make up nearly 50% of India's 1.35 billion population; however, female participation in politics and other aspects of social life remains underwhelming.

Despite women's underrepresentation in politics, some of them have held high positions in government. For instance, former PM Indira Gandhi had two stints in power — from 1966 to 1977 and again from 1980 until her assassination in 1984.

Currently, India's foreign and defense ministers are women. Sonia Gandhi, an opposition politician, is a powerful figure in Indian politics. She was featured in Forbes list of the world's most powerful women.

Ranjana Kumari, the director of the New Delhi-based Centre for Social Research, believes that two types of women succeed in Indian politics: "Those who belong to political families, as they have the necessary political and financial backing; and politicians like Mamata Banerjee [chief minister of the West Bengal state] or Mayawati [former chief minister of the Uttar Pradesh state], who have risen from the lower political cadres," Kumari told DW.

"The latter lack financial resources and face political victimization, but they still manage to fight their way up," she added.

According to the figures released by the South Asian country's Election Commission in 2018, 421,141,073 female voters are eligible to vote in the month-long general elections, which kicked off on April 11.

Although women's political participation has generally increased in India, the lower house of parliament (Lok Sabha) still has a meager number of female members — only 11%. A proposed bill to reserve 33% of Lok Sabha seats for women has still not been passed by lawmakers.

Karuna Nundy, a prominent women's rights activist and lawyer who advocated changing sexual crime laws after the incident with Nirbhaya, the 21-year-old woman who was raped in December 2012, calls it the "gatekeeper problem."

"Our political parties are very patriarchal and they discriminate against women," she said.

The situation is more encouraging at the village level. Women's representation is stronger in village administration — the Panchayati Raj system — as 50% of its seats have been legally reserved for them. But analysts say that many of these women are "controlled" by the male members of their families.

But Kumari believes the situation is changing now. "Women's leadership is undergoing a change because they have exercised power and they have been able to create acceptance of their leadership."

Kumari's analysis could be validated by the fact that women voters have proven that they could be a game changer in elections. The Madhya Pradesh state elections saw female voters playing a decisive role in voting the Bharatiya Janata Party (BJP) out of power.

The importance of women in the 2019 elections can be measured by the fact that the opposition Indian National Congress party has promised to pass the 33% women representation bill in parliament. The ruling BJP party says it will focus on the agricultural sector in order to improve the lives of farmers and lower sections of Indian society.

But analysts take the BJP's women empowerment claims with a grain of salt. After coming to power in 2014, Prime Minister Narendra Modi invested in creating awareness about women's education, saving vulnerable girls and building toilets for women. His government, however, hasn't been able to deliver on women's safety and security issues.

Rights activists are of the view that whoever comes to power after elections conclude in May must ensure that women are safe in their homes and society.

Analysts say that although it is difficult to predict whether women's issues will have an impact on the polls, the large size of the female population in India could swing the vote in any direction.

India soars above other countries when it comes to hiring women pilots, despite the country's deeply entrenched patriarchal mindset. What is inspiring Indian women to break barriers and earn their wings? (15.03.2019)

Transgender people in India face many obstacles in accessing quality health care, and especially when it comes to the high costs of gender affirmation surgery.