Several hundred thousands of farmers have committed suicide in the last two decades, driven by poverty and debt following failed harvests. For the families left behind, especially women, the consequences can be harsh. 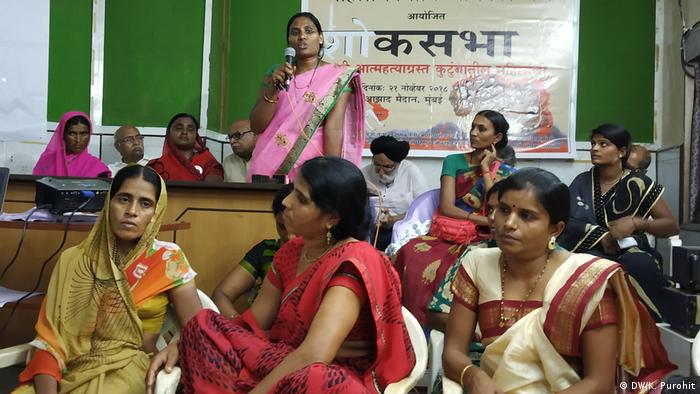 Vijayshree Bhagat didn't know about the recent United Nations Office on Drugs and Crime (UNODC) report which said the home was the most dangerous place for women, but she concurred with its message. A few feet away from where she sat, some women farmers raised their arms and chanted slogans, demanding justice from the government. She took notice of them, but then said, "That's fine. But who will protect us from our families?"

Bhagat is 29 and a woman farmer in Wardha district, in the western Indian state of Maharashtra. In a number of states across India, particularly in the south and the west, farmers have been at the receiving end of a severe agrarian crisis, driven by falling prices for their produce, crop failure, increasing costs and mounting debt. Many have been forced to take their own lives.

According to figures released by India's National Crime Records Bureau in 2015 — the most recent data available on farmer suicides — around 257,000 farmers killed themselves between 1995 and 2010. The Times of India, a major English-language daily, estimates that in Maharashtra alone, seven farmers kill themselves every day. The crisis triggered massive protests in New Delhi at the end of November, when over 100,000 farmers marched to the capital, demanding a solution from Prime Minister Narendra Modi's government. 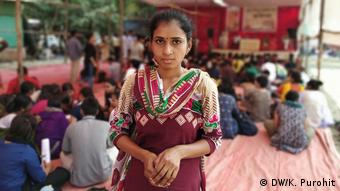 After her husband's death, Vijayshree Bhagat lost her claim to the farmland they had tilled together as well as the house she had lived in

Most suicides are committed by male farmers, like Vijayshree Bhagat's husband Prashant, who took his life after repeated crop failures and domestic squabbles. They were married for seven months and Bhagat was pregnant. "I was in a daze. I didn't know what was happening around me," she said. She went to her parents' home, where a couple of years ago, her farmer brother, too, had ended his life by consuming kerosene after his crops yielded little harvest over a period of several years.

Soon after her child's birth, her husband's family broke all ties with her. She also lost her claim to the farmland they had tilled together as well as the house she had lived in.

A voice for women farmers

Stories of women like Bhagat have become a side note in the broader narrative around India's agrarian crisis. Activists say protests about the agrarian crisis rarely consider the plight of women farmers. "80 percent of the work on a farm is done by women and yet, the Indian state doesn't recognize these women as farmers," said Aarti Bais, the co-founder of Swarajya Mitra, a group based in Maharashtra's Amravati, a district with one of the highest rates of farmer suicides in the country.

But the situation is slowly changing. Two weeks ago, Bhagat and a group of 80-odd women farmers like her traveled to Maharashtra's capital, Mumbai, and launched a protest at "Azad Maidan" or Freedom Square, frequented by Mumbai's protesters. Sitting under a makeshift canopy, the women demanded a more gender-sensitive approach to the crisis and a stronger social security net. But more importantly for them, they demanded an acknowledgement of their existence.

To coincide with the protest, Bais and her colleagues released a report that tried to quantify this neglect. Under the umbrella body of Mahila Kisan Adhikaar Manch (MAKAAM), a group of non-governmental organizations, activists and researchers surveyed 505 agrarian families, where a male member had committed suicide.

For MAKAAM, the results of the survey were a reiteration of its belief that both the government and wider society ignored women farmers. "The only time the state [government officials] speaks to a female farmer is just after her husband's suicide and that conversation is largely about the validity of the suicide," MAKAAM's national facilitation member Seema Kulkarni told DW. Kulkarni was referring to a bureaucratic exercise government officials carry out to examine whether the suicide was "farming-related" or not.

According to a report by the National Crime Records Bureau in 2016, bankruptcy, poverty, family problems and marriage-related issues were some of the major causes for farmers killing themselves. Farming-related problems, on the other hand, accounted only for 19.5 percent of suicides, the report said, prompting criticism that the government was shifting blame and not addressing the issue at hand.

For Bhagat, though, the MAKAAM survey made her realize that she wasn't alone in her struggle. Only 35 percent of the women interviewed for the report said they could claim the right to their husband's home after his death. The rest, like her, had to find alternatives.

Bhagat was lucky, because she could live with her parents after her husband died but another woman farmer, Neelima Bhalerao, who lives in Maharashtra's Wardha district, had no such luck.

In 2016, after her husband killed himself due to soaring farm debts, she was thrown out of the house by her husband's family and had nowhere to go. "I built a small shed out of tin sheets right next to their home, on the family land," she said. But her in-laws didn't approve of it. "When I tried getting an electricity connection, they complained against me and got it cancelled. I lived in darkness for a year," she said, adding that soon after, she moved into a small rental house.

Most women farmers have to put on a fight, even to get access to their husband's property. According to MAKAAM's Kulkarni, access to farm land is critical because it was the only source of livelihood for most of these women. Bereft of this land, these women farmers would not be able to sustain themselves. 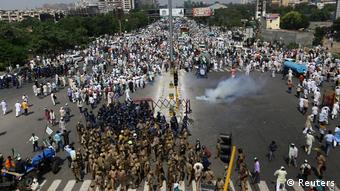 Vijayshree Bhagat, for instance, is now forced to work as a daily-wage laborer on other people's farms. She gets paid just over $2 (€1.75) a day for each day she reports to work. "But this isn't enough. Often, because of poor rains, there is no work to do," Bhagat says. For the last one month, she has not got any work because there is just not enough water in her village to sow the winter crop.

But even when there is work, misogyny often prevents these women from being able to access it. For Sunita Dhage, a widowed woman farmer from Osmanabad district, it means not being able to participate in government-sponsored employment generation projects. "The villagers just won't allow widows like us to work," she said, referring to the prevalent cultural mindset against women.

But tired of neglect, women like Bhagat are now increasingly speaking up. During the protest, one woman after another addressed the crowd, sharing their woes and receiving solidarity in exchange. One woman spoke of how she continues to be harassed by local government officials for access to government welfare schemes, another spoke of the time she fought her own family and yet another of an instance when she stood up and made the state's chief minister listen to her point.

For Bhagat, the protest in Mumbai meant having to forego the money she could have made by working for three days. But when the organizers asked her if she wanted to join the protest, Bhagat didn't think much. "I said, if we are going to fight for our rights, I'll be there."

Thousands of desperate farmers across India have gathered in the heart of the capital to protest against the continued state of agrarian distress. Farmers' discontent poses a challenge to PM Modi's government. (30.11.2018)