Angry, distressed farmers march to India′s parliament | Asia | An in-depth look at news from across the continent | DW | 30.11.2018

Thousands of desperate farmers across India have gathered in the heart of the capital to protest against the continued state of agrarian distress. Farmers' discontent poses a challenge to PM Modi's government. 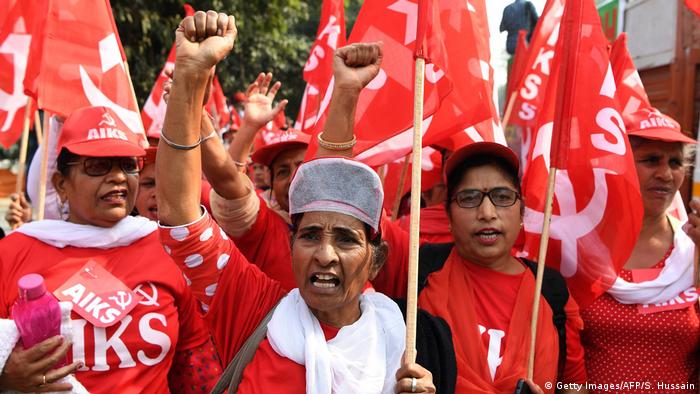 Leelawati, 72, walked over 110 kilometers (68 miles) to reach Delhi from Karnal in neighboring Haryana. The frail-looking woman was at the vast expanse of the Ramlila grounds in the Indian capital where a sea of farmers from across the country congregated protesting the lack of government efforts to alleviate their hardship.

"This probably is my last walk to fight for justice. Farmers are called the backbone of the country, but we are treated so badly and have nothing to live for," a tired Leelawati told DW. A failed crop and mounting debt forced her husband to commit suicide a year ago.

Munger Lal, 41, a small farmer from the state of Bihar, has also trudged to the capital. "I still have loans to pay, and the government's previous assurances are all empty promises. This callous attitude has angered all of us," said Lal, who has also participated in previous farmer demonstrations in Delhi.

Farmers from across India have flooded by trains and buses into Delhi since Thursday to mass in the capital city's Ramlila grounds before marching to parliament.

Participants marched through central Delhi chanting slogans and holding placards emblazoned with "Down With Modi Government" and "Long Live Farmer Unity" as thousands of riot and armed policemen stood guard.

Indian farmers have repeatedly staged large demonstrations over the past year, accusing the authorities of failing to support their livelihood and demanding government assistance, including better prices for their crops and farm loan waivers.

Earlier this year, farmers and indigenous groups marched to India's financial capital Mumbai with the same set of demands.

Similar protests have taken place in the central state of Madhya Pradesh, when police opened fire on farmers who were protesting a fall in prices.

Rural distress has been a cause for worry for several years, with millions of India's mostly small-scale farmers squeezed by falling prices for their crops and the rising transportation and storage costs.

With hopes of being heard in the country's capital, over 200 farmer organizations belonging to the All India Kisan Sangarsh Coordination Committee have organized the latest march in Delhi.

"This time we are also demanding a special session of parliament dedicated to discussion around the agrarian distress. The government only takes farmers seriously when the elections are around the corner," Vijoo Krishnan, joint secretary of the All India Kisan Sabha, told DW.

Organizers said some 80,000 farmers and farm laborers were participating in the two-day agitation that will culminate with a petition to the Indian president. 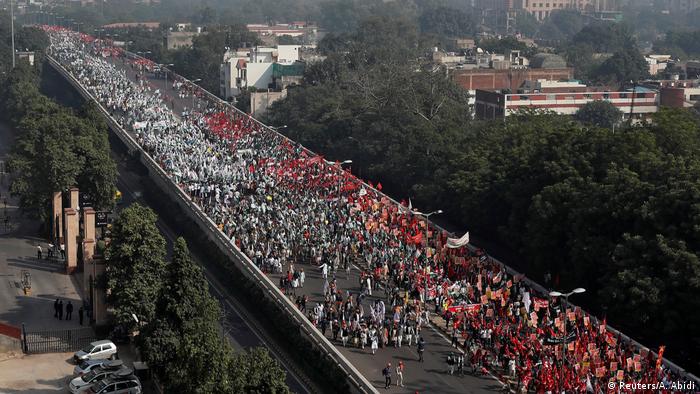 Opposition parties have accused the ruling Bharatiya Janata Party (BJP) of being pro-rich and anti-farmer. But the BJP has rebutted these claims.

Still, outbreaks of rural discontent pose a challenge to Prime Minister Narendra Modi, who promised to double farm incomes by 2022. Many farmers say their condition hasn't improved since Modi came to power in 2014.

The government's inability to make a success of its other initiatives such as crop insurance also seems to have led to a sense of betrayal among farmers, say observers. "The Indian farmer's plight defines the nation's condition and the state needs to do everything to solve their problems. Farmers are moving from suicides to active protests and that is a good sign," P Sainath, a journalist working on agrarian issues, told DW.

Farmers in India often take loans to buy agricultural or irrigation equipment. But when there is a poor monsoon or natural calamity, farmers are unable to repay the loans and are forced to borrow more to manage expenses.

Also, many small farmers not eligible for bank credit at exorbitant interest rates from private sources.

Two-thirds of India's population of 1.3 billion depends on farming for their livelihood, but agriculture makes up just around 17 percent of the nation's total economic output, amounting to about $2.3 trillion.

Each year millions of small farmers suffer due to scant irrigation facilities that reduce the yield and leads farmers into a deadly cycle of debt and suicides.

India lacks a robust irrigation infrastructure and most of the country's farmland relies on annual monsoon rains.

"These movements can be seen as an articulation of socio-cultural grievances. This march is for the liberation of farmers from the spectre of suicides and from various forms of exploitation propagated by the state," Yogendra Yadav of Swaraj India, a political organization, told DW.

A group of farmers from the southern state of Tamil Nadu was also part of today's protests. In April last year, they staged a bizarre protest showcasing skulls and eating mice to highlight their plight with the aim of getting a relief package and loans waived from the government.

"We are back again. Our debts have not been waived and it is a miracle that many of us are still alive. But we will fight and show that you cannot wish us away easily," Manikandan, a farmer from Madurai, told DW.