India – the ′unlikely′ poster girl of gender equality in aviation | Business| Economy and finance news from a German perspective | DW | 15.03.2019

India soars above other countries when it comes to hiring women pilots, despite the country's deeply entrenched patriarchal mindset. What is inspiring Indian women to break barriers and earn their wings? 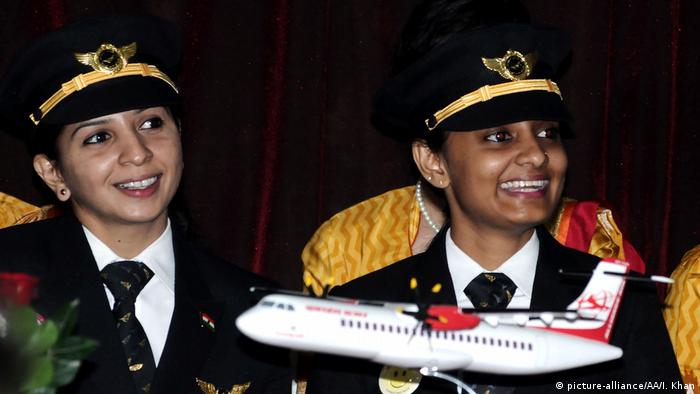 It's not very often one hears about India trailblazing on issues of gender equality. On the contrary, the country regularly makes headlines for all the wrong reasons when it comes to women: high rape statistics, dowry deaths, and pervasive discrimination.

So when data collated by the International Society of Women Airline Pilots showed that India had the highest proportion of female commercial pilots in the world at 12 percent – twice as high as in most Western countries and way above the global average of 5 percent – many were left astonished.

International media ran stories calling India a 'surprise' leader on the list. Some even called on their readers to guess which country hired most female pilots, as if they anticipated the readers' incredulity.

For Indians, while the news was a welcome break from incessant incidents of violence against women, it wasn't exactly a bolt from the blue.

"The urban India has stopped differentiating between what a girl should pursue as a career and what a boy should do," said Bajpai, who holds the world record for leading the longest flight with an all-female crew. 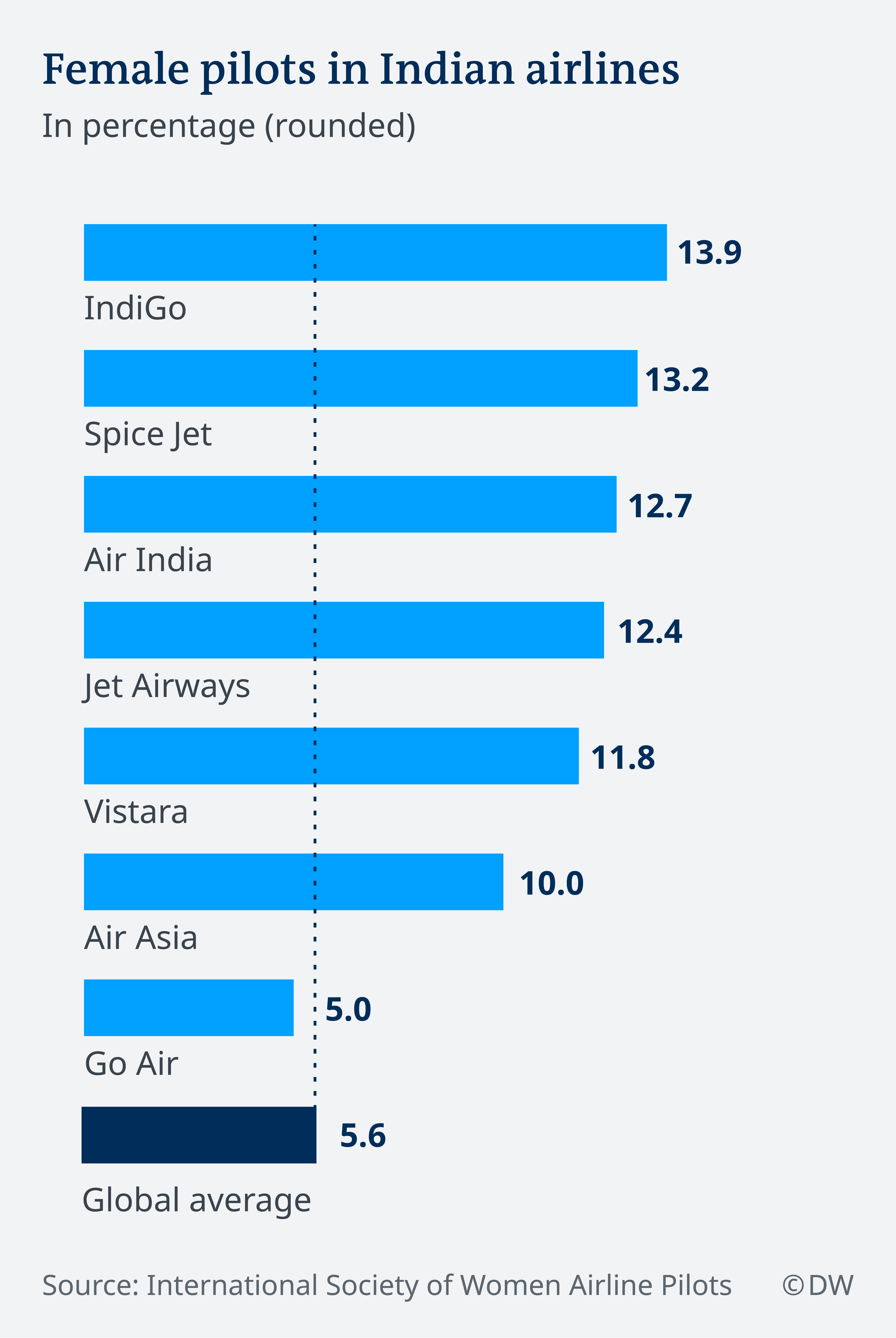 India is the world's fastest-growing aviation market as the airlines tap into rising demand from the country's ever-growing middle class. With domestic air traffic growing in double digits there is an increasing demand for pilots.

Filling the gap are hundreds of women, who are increasingly taking a liking to the male-dominated profession, which promises them a safer workplace, maternity benefits and indeed, a high — and equal — wage.

"Awareness has risen about this being an alternate occupation," Priti Kohal, a captain with Indian carrier Jet Airways, told DW. "Women typically don't want to test boundaries and in this profession you are given an SOP (standard operating procedure) and you have to adhere to it."

Women are filling nearly a quarter of seats in some of the country's prestigious flying schools — a sign that the number of female pilots is only headed north from here.

Indian airlines are introducing policies not only to attract more and more women to the cockpit but also to retain them.

Indigo, the country's largest carrier by market share, has the highest proportion of female pilots among the world's major airlines at 13 percent. The airline has seen the number of female pilots rise to 330 — some of them managers — from 80 in the last five years.

"This statistic is a testament to the Indian aviation industry being welcoming and creating a level playing field for women," Sakshi Batra, Indigo's spokeswoman, told DW.

The airline runs crèches for its employees and offers pregnant pilots on break from flying duties office roles and an allowance to compensate them for any loss in income.

"This enables women pilots to constructively stay engaged with the profession in spite of having to take a break from their flying duties," Batra said.

At Jet Airways, around 13 percent of the pilots are women — a figure that the company expects to "only continue to grow over the coming years."

"At Jet, there were no biases. The recruitment process was tough and robust," said Kohal, who has been with the airline for more than two decades. "But once in we had to prove that we were doubly good," she says, adding that she still has to prove herself even after all these years in the cockpit.

Flying is one of the few professions in India where there is no pay discrimination based on gender. Pilots get paid on the basis of seniority and the number of miles under their belts.

Kohal feels there is something that makes the profession a perfect match for women: "the urge to get it right."

"All women have this innate desire. Whether it's cooking, dressing up, being a good wife or a good mother, women just want to get it right," she said. "And as a pilot you need to get it right all the time."

"Men are more hard-wired to do risky things and women are not," she said. "Women are very procedural, meticulous and focused." 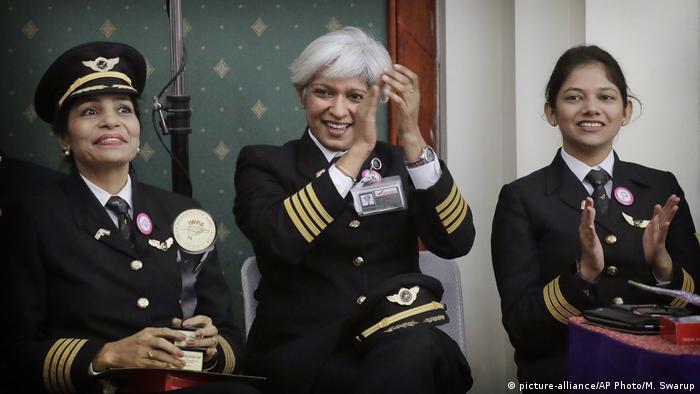 The oft-repeated notion that girls dislike machines and hence can't become pilots, the lack of role models and the pressure to have children are some reasons often given for the skewed representation of women in the cockpit globally.

In the US — the world's largest aviation market — a little over 4 percent of the pilots are women.

Kathy McCullough, a retired Boeing 747 captain from US, feels the US carriers, could learn from Indian airlines, which are increasingly accommodating pilots balancing new motherhood.

"My pilot friends in India tell me they all have families," McCullough told DW. "But the US airlines don't make any adjustments for new mothers. This is not a job where a nursing mother can return to work just six weeks after giving birth."

"Old-school men want to maintain the status quo. Most of the men in power in the US aviation sector are from the military and they want to keep it a boys' club," she said.

German flagship carrier Lufthansa Airline has 7 percent female pilots. The airline says having more women in the cockpit is one of its central human resource goals.

The prospects seem promising: 15 percent of the prospective pilots in the current batch at the European Flight Academy, which trains pilots for all Lufthansa Group airlines, are female.

Captain Leah and the family in the sky

Captain Leah and the family in the sky

Horrific rapes in India in recent days have once again sparked outrage and large-scale protests nationwide. The ghastly incidents highlight the link between sexual violence and the caste system. Murali Krishnan reports. (10.05.2018)

The Indian Air Force (IAF) has said it will have its first female fighter pilots within the next two years. The move could open the door to women across the military sector. (24.10.2015)

Being a female pilot in Zimbabwe

Natsai Chiremba has made her dream come true and has become a pilot in Zimbabwe. Besides flying she wants to encourage other young people to follow their dreams – and not to be limited by traditional expectations. (22.01.2016)