Caste dynamics behind sexual violence in India | Asia | An in-depth look at news from across the continent | DW | 10.05.2018 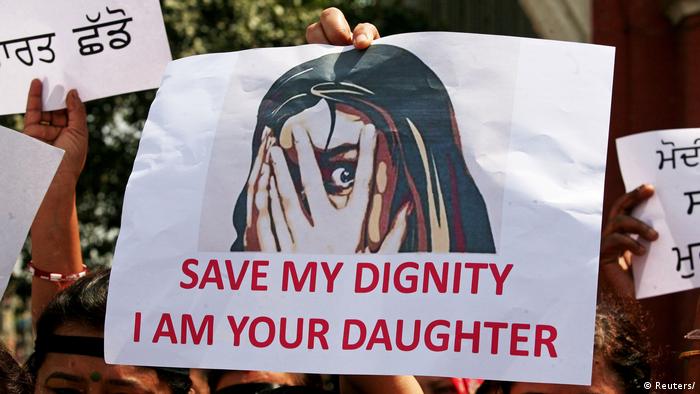 Caste dynamics permeate every aspect of life across vast swathes of India, particularly in the South Asian nation's rural areas. When it comes to sexual violence, a potent mix of caste-driven rivalries, and sometimes religion-based ones, have been the prime motivational reasons.

The country is still coming to grips with the recent gang rape and murder of an 8-year-old girl in India-administered Jammu and Kashmir that drew global attention and condemnation. But sexual violence cases involving marginalized groups — including tribal people and the Dalits, who form the bottom of the Hindu caste and social hierarchy — haven't received enough public attention, say analysts.

Last month, a Dalit girl who was allegedly raped for several months went to the superintendent of police's office in the Satna district in the central state of Madhya Pradesh with a six-month-old fetus wrapped in a plastic bag. She accused three upper-caste locals of sexually assaulting her. In the state of Chhattisgarh, a similar case came to light when a 22-year-old woman was allegedly lured away by a priest and raped.

The list is long and observers say the incidents demonstrate that caste-based rape is a tool of domination that the upper castes use against "lower-caste" women.

"We have seen this almost on a daily, yet sickening, basis. There is no caste-based data on sexual crimes in the country, but it is there for everyone to see. The women are also targeted more when their men folk leave for urban centers in search of work," Ranjana Kumari, director of the Center for Social Research, told DW.

Analysts point out that rape is often used as a weapon when there is a situation of caste or class conflict. This was evident in February 2016 when agitation by the Jat community, a relatively well-off upper caste agricultural community demanding reservations, or quotas of government jobs, disrupted life in the northern state of Haryana.

During the violent riots, it came to light that attackers dragged out nine women, all Dalits, from their houses and subjected them to gang rape.

Similar incidents have also happened in the southern state of Tamil Nadu. Sexual violence is not restricted to rural areas, however. Last month, the southern city of Hyderabad's crime records bureau pointed out that over the past three years, 37 Dalit and tribal women in the city have been raped by members of upper castes.

"Rape is about power. Therefore, rape of Dalit women by upper-caste men is an exercise of power. It is also how upper-caste men can imply that Dalit men were not able to 'protect' women. Hence, rape is also a contest among men," sociologist Sanjay Srivastava told DW.

Dalit women number over 100 million and according to the National Crime Records Bureau, more than four Dalit women are raped every day. The National Campaign on Dalit Human Rights, an NGO, says over 23 percent of Dalit women report being raped, and many have reported multiple instances of rape.

Many perpetrators commit sexual crimes with a sense of impunity, say experts, pointing to abysmally low conviction rates and a lack of legal protection for the victims.

Activists chronicling atrocities against the Dalit community say the rural women are subjected to ghastly crimes when they or their families are deemed to have violated traditional caste-derived rules and norms.

"One form of punishment is that either their property is burnt down or looted. The other degrading method is, women are raped, undressed and then paraded in public squares," Shabnam Hashmi, a social activist told DW.

A variety of reasons can be attributed to the rising violence against women from marginalized communities. With men from lower-caste groups increasingly migrating to cities and urban areas in search of employment, women of their families are rendered vulnerable back in their villages.

In addition, displacement of indigenous communities from their known areas of living like forests has led women to lose their secure conditions of life and render them vulnerable.

Political assertion by the Dalits has also been a reason for the increase in attacks. "The government's claims about safeguarding Dalit rights are a sham. Caste-based power dynamics need to be challenged. We are dealing with a historical problem here," says activist Paul Diwakar.