An incident of "mass molestation" on New Year's Eve in Bangalore has put an ugly spotlight back on sexual assault against women in India. But some officials insist on blaming victims and western values. 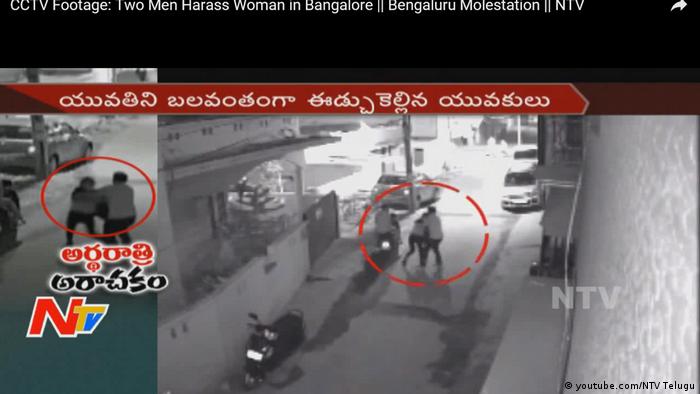 After multiple reports of widespread sexual assault and molestation during New Year's Eve celebrations in Bangalore, a metropolis of 8.4 million in southern India, local authorities are beginning to track down some of those responsible. However, despite an increased police presence in the city and CCTV surveillance, only one "official" complaint has so far been filed.

Statements made by officials since the incident also indicate that there is more concern about defending the integrity of their institutions than that of young women who have been assaulted. And the response from officials has tended to shift blame for sexual assault to "western values" rather than addressing the root of this insidious behavior from young Indian men.

In statements defending the state police, Karnataka Home Minister G. Parameshwara said on Tuesday, January 3, that young people who "copy westerners not only in mindset but even in their dressing" were also to blame for disturbance and harassment. He maintained that Bangalore is safe and that protecting women and children is a priority but added that on New Year's Eve and Christmas, "these kinds of things happen."

Parameshwara subsequently said these remarks were taken out of context. Lalitha Kumaramangalam, the Chairperson for India's National Commission for Women (NCW), has called for his resignation. In statements reported by PTI news agency, Kumaramangalam asked if Indian men would ever learn to respect women.

"I want to ask this minister - are Indian men so pathetic and weak that when they see a woman in western clothes on a day of revelry, they get out of control?"

Parameswara was not the only Indian official blaming the incident on outside influences.

Abu Azmi, a leader with the Samajwadi Party headquartered in New Delhi, seemed to place responsibility with the families of victims by saying that "security starts at home."

"Partying late night in half-attire, blindly following western culture, has never been our culture," he said. "As far as the Bangalore molestation is concerned, women and their guardians must also take precautions and remember that security starts at home."

Azmi also blamed "western" culture for sexual assault in India, adding that women must think about their own security and should be safeguarded from western influences.

"Women are the pride of our family and country. It is our duty to safeguard them," he said. "If we allow them to follow western culture blindly, then I am sorry to say that people will misbehave toward them in such ways."

A slow response from police

Directly after the incident, police reportedly dismissed claims of mass sexual assault, saying that no official reports had been filed. But after CCTV footage of women being assaulted emerged on social media, authorities began to take action. As many as six suspects have now been arrested, after being captured on CCTV attacking women and several of these videos were published on social media.

So far, one woman has officially filed a report with the police. And according to the Indian news service IANS, police have been slow in their response because cases have not been registered and limited evidence and witness testimony has been received.

Bangalore's police chief, Praveen Sood, told reporters on Wednesday that the police "did not waste any time" in investigating the assaults and that they had "credible evidence" to pursue suspects. He added that a so-called "first information report" had been registered and that an investigation was in progress.

Parameshwara told Indian media that in preparation for massive crowds, up to 1,500 police and security personnel were deployed in Bangalore on New Year's Eve and dozens of CCTV cameras were installed.

Sexual assault in the spotlight

On December 16, 2012, a brutal crime sent shock waves across India. According to police reports, a 23-year-old female physiotherapy student and her male companion were coaxed by six men into boarding an off-duty bus they thought would take them home after watching a movie at a shopping mall in New Delhi. The men savagely beat the man and repeatedly raped the woman, inflicting massive internal injuries with an iron rod. The victims were then dumped naked on the roadside. The woman died of her injuries two weeks later in a Singapore hospital. 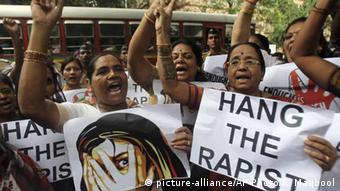 On December 16, 2012, a brutal rape sent shock waves across India

Although government statistics show a woman is raped every 20 minutes in India, the brutality of the attack became the tipping point that brought the issue of violence against women into the limelight, not only in India, but globally.

The incident triggered outrage and a debate over women's safety across the South Asian nation, prompting the country's parliament to pass stricter laws on sexual violence, including a minimum 20-year prison sentence for rape and, in the event the victim dies, the death penalty. Moreover, fast-track courts were established to speed up trials in sexual assault cases which earlier took years to conclude. Some 10 months after the crime, such a court found four of the adult suspects guilty on all counts and sentenced the men to death by hanging.

Experts point out that the widespread media coverage of the case has also led to an increased awareness of the issue of violence against women in Indian society. "Women have been forthcoming in reporting crimes against them. They have been empowered by law and the response of civil society," India's additional solicitor general, Indira Jaising, told DW.

This view is shared by K. T. S. Tulsi, a senior lawyer practicing in the Supreme Court of India. According to the lawyer, the social stigma associated with rape is getting reduced. "Girls are becoming more assertive and they are open to complaining. They don't feel that the society is going to stigmatize them," Tulsi told DW. 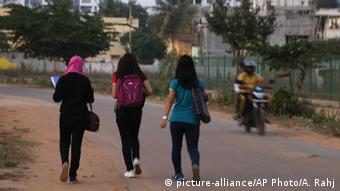 However, experts say that a lot still needs to be done to make women feel safe in the country, as there has been little progress made in addressing the attitudes that legitimize violence and discrimination against women. "Rape cultures are nourished by norms, attitudes, and practices that trivialize, tolerate, or even condone violence against women," Indian human rights activist Ranjana Kumari explains.

Kumari, who also heads the New Delhi-based Centre for Social Research (CSR), believes that the only way to prevent these crimes is to educate the masses, especially men, on the issues of violence, gender stereotyping, and the pervasive and negative impact of patriarchy.

"The subject of gender sensitization must be introduced from the grass-roots level in schools, colleges and the workplace. We need to educate men and women on women's rights under the law and work with communities to develop a gender sensitive society that is underpinned by respect and equality," the rights activist said.

This view is supported by Kaimini Jaiswal, a legal expert and lawyer at India's Supreme Court, who believes that in order to bring about real change, it is imperative to empower all women, most of whom are still financially and emotionally dependent on their male relatives. "What we see in the bigger cities and metros is not the true picture. Women can barely raise their head and voice in most households. This needs to be dealt with literacy, because most women don't even know their rights."

After the latest incident in Bangalore, Kumaramangalam from the NCW told the news channel India Today, "every time something like this happens in this country, everyone gets outraged but nothing seems to change. There is a combination of factors holding women back in this country."