The fourth phase of Indian elections has seen a low turnout in parts of Kashmir after separatist groups called for a boycott. Experts say the voting trend shows people's disillusionment with the political process. 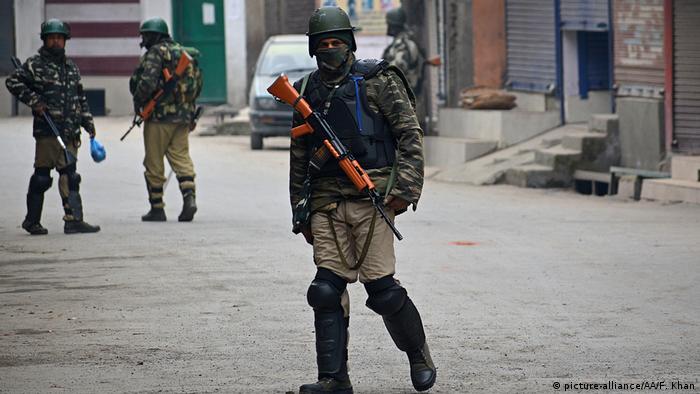 Security was beefed up in India-administered Kashmir on Monday, as voters headed to the polls to elect members of Parliament. Reportedly, almost no votes were cast at Kulgam-Anantnag constituency. In a previous round of Kashmir polls a fortnight ago, a similar trend was observed.

Separatist groups in Kashmir have boycotted the general elections, as they accuse the central Indian government in New Delhi of using military force against Kashmiris.

Since 1989, Muslim insurgents have been fighting Indian forces in the India-administered part of Kashmir (and Jammu)— a region of 12 million people, about 70% of whom are Muslim.

India and Pakistan have fought two of their three wars since independence in 1947 over Kashmir, which they both claim in full but rule in part.

Asma Firdous, a Srinagar resident, chose to boycott the election. "We don't consider ourselves as Indians, nor do Indians consider us as one of their own. Then why should we vote?" the 26-year-old postgraduate student told DW.

Political experts say that an increasing number of Kashmiris feel disillusioned with the political process, more so since the Hindu nationalist Bharatiya Janata Party (BJP) came to power in 2014.

Amid a violent separatist insurgency and accusations that Pakistan is backing jihadis, Narendra Modi, BJP leader and prime minister of India, has resorted to the use of force to stabilize the region. Modi also wants to scrap Article 370 and Article 35 A of the constitution, which reserve a special status for the state of Kashmir and guarantee permanent residency to state residents. Many Kashmiris allege that the BJP is trying to change Kashmir's demography in favor of the Hindus.

"It shows that alienation is growing in Kashmir; to an extent that people have become indifferent to the electoral process," Hussain told DW.

After the 2014 elections, the BJP formed a coalition government in the state with the People's Democratic Party (PDP). But the security situation deteriorated in the state soon thereafter. The military launched a crackdown on the rebels, as clashes in major Kashmir cities killed hundreds of people.

Last year, the BJP quit the ruling coalition in Jammu and Kashmir State, citing a worsening security situation in the disputed Himalayan region. The BJP claimed that the state government had failed to curb radicalization or guarantee civilian rights in the volatile territory. Subsequently, India's federal government in New Delhi took direct control of the state.

After resigning from her post as chief minister of the state, Mehbooba Mufti, also the PDP president, has become openly critical of Modi and the BJP, accusing New Delhi of interfering in Kashmir's affairs.

The administrative fiasco has also affected the PDP, which has failed to convince people to vote in the ongoing elections. Mufti admitted that her party's "credibility has been tainted."

"People are angry and disillusioned. They feel democracy is only limited to elections, as there is no democracy after the elections," Mufti told DW.

Mufti says she would take measures to restore people's confidence in the political system.

At the same time, a lack of faith in the political process is pushing more and more youth toward militancy. Many Kashmiri youth are now at the forefront of the separatist movement. Experts say that many of these teenagers, born after the start of the insurgency in 1989, don't feel any association with New Delhi. According to the latest census, nearly 60% of Kashmir's male residents are under the age of 30, and 70% are below the age of 35.

"The state simply does not have enough jobs to keep its youth occupied. Apart from unemployment, there is also a need to work out a political solution," R.K. Bhat, a political science lecturer from Srinagar, told DW.

Experts say the Islamic extremist groups are using this alienation and resentment to their advantage, as the decades-old anti-India movement is increasingly moving toward Islamization.

"The rise of Islamic radicalism in the region, fostered by the Afghan War in the 1980s, had a direct impact on the Kashmir conflict. The anti-India movement became more Islamized in the 1990s with the influx of militants trained in Pakistan," Agnieszka Kuszewska, a Krakow-based Kashmir expert, told DW.

"The security forces should be held accountable for their human rights violations so that the Kashmiri people would regain trust in state institutions. The rise of religiously motivated nationalism is also a worrying phenomenon, especially in religiously and ethnically diverse parts of Kashmir. It is vital to address this trend," she underlined.

The militant attack in India-ruled Kashmir has once again put New Delhi and Islamabad on a war footing. Analysts at the Munich Security Conference say it is a setback to those who wish to see lasting peace in the region. (15.02.2019)

Unknown gunmen have shot dead Shujaat Bukhari, a prominent journalist and editor in Indian-controlled Kashmir. A voice of peace in the violence-wracked region, he also contributed to DW. (15.06.2018)