India-administered Kashmir is again in the grip of violence, as protesters clash with security forces. New Delhi claims Pakistan is fueling terrorism in the area, but some say PM Modi's Kashmir strategy is to blame. 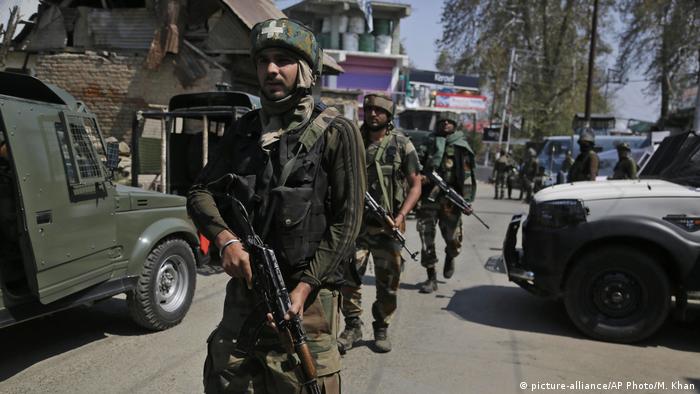 India-administered Kashmir is under a state of heightened security, after the local government imposed a curfew in the capital Srinagar and other parts of the valley. Kashmiri separatists called a strike on Monday in protest of clashes that killed at least 20 people and left 200 injured.

At least 13 rebels and three Indian army soldiers were killed in fierce gunbattles in southern Kashmir on Sunday. Four civilians were killed and dozens injured when police opened fire at people protesting against the military operation.

Violence has spiked in the Indian part of Kashmir since July 2016, when troops killed Burhan Wani, a young separatist leader. More than 100 people were killed in clashes that followed Wani's death.

Since 1989, Muslim insurgents have been fighting Indian forces in India-administered Kashmir - a region of 12 million people, about 70 percent of whom are Muslim. India and Pakistan have fought two of their three wars since independence in 1947 over Kashmir, which they both claim in full but rule in part. 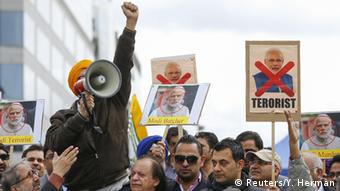 Is Modi prepared to work on a political solution to the Kashmir crisis?

New Delhi believes the crackdown on Kashmiri rebels is necessary as the secessionist movement is not indigenous and receives backing from Islamabad. Pakistani officials say their support to Kashmiri Muslim separatists is only diplomatic.

The protracted insurgency in Kashmir has claimed tens of thousands of lives.

While Indian rights activists urge Prime Minister Narendra Modi to engage in dialogue with Kashmiri separatists, the Indian government says it will use more force against what it says is a Pakistan-backed militancy.

"Indian PM Modi's Kashmir strategy is two-pronged: financial support for Kashmir's development, and simultaneously using force against separatists. The policy hasn't really been successful as resentment against the state government and New Delhi has increased manifold in the past few years. The use of force doesn't go together with development," Ali Raza Syed, chairman of the Brussels-based Kashmir Council non-governmental group, told DW.

But Siegfried O. Wolf, director of research at the Brussels-based South Asia Democratic Forum (SADF), is of the view that Modi has not been successful in implementing his socio-economic agenda in Kashmir as a result of an ever-increasing jihadism in the valley.

"New Delhi has been forced to see Kashmir predominantly through a security lens. Therefore, the space for political dialogue is quite limited," Wolf told DW.

"It is true that PM Modi hasn't achieved a major breakthrough to end the political deadlock in Kashmir, but we have to wait and see if the coalition government of the BJP and the local Jammu and Kashmir People's Democratic Party (PDP) could work together to improve the situation," he added.

Kashmiri youth are at the forefront of the new wave of violence. Experts say that many of these teenagers, born after the start of the insurgency in 1989, don't feel any association with New Delhi. According to the latest census, nearly 60 percent of Kashmir's male residents are under the age of 30, and 70 percent are below the age of 35.

"The state simply does not have enough jobs to keep its youth occupied. Apart from unemployment, there is also a need to work out a political solution," R K Bhat, a political science lecturer from Srinagar, told DW.

Experts say the jihadist groups are using this alienation and resentment to their advantage, as the decades-old anti-India movement is increasingly moving toward Islamization.

"The rise of Islamic radicalism in the region, fostered by the Afghan War in the 1980s, had a direct impact on the Kashmir conflict. The anti-India movement became more Islamized in the 1990s with the influx of militants trained in Pakistan," Agnieszka Kuszewska, a Kashmir expert and an associate professor at the Krakow-based Jagiellonian University, told DW.

"When I see the "Welcome Taliban" graffiti in Srinagar, two things come to my mind: 1) Some young Kashmiris and militant groups show their support to these groups merely because they want to protest against grave rights abuses in the valley; 2) It may also be framed by the security establishment, which is notorious for enforced encounters and other human rights violations," she added.

"The security forces should be held accountable for their human rights violations so that the Kashmiri people would regain trust in state institutions. The rise of religiously motivated nationalism is also a worrying phenomenon, especially in religiously and ethnically diverse parts of Kashmir. It is vital to address this trend."

Experts say that Pakistan's direct involvement in the Kashmir conflict began in the late 1980s, after which the somewhat liberal Kashmiri movement took on a more religious outlook.

Opinion: The anniversary of hatred

Some analysts argue that had Pakistan allowed an indigenous movement to take root in Kashmir, the issue would have gained more international attention. In the present scenario, Indian PM Modi can easily conceal the human rights violations in Kashmir and intensify crackdowns on protesters in the name of fighting terrorism, they say.

"Pakistan's Kashmir policy is based on double standards and hypocrisy. Islamabad claims it backs India-administered Kashmir's right to self determination but suppresses Kashmiris in its part. The UN considers the entire region – both Indian and Pakistan Kashmirs – disputed," Talat Bhat, director of the Stockholm-based Nordic Kashmir Organization that lobbies for an independent, secular and united Kashmir, told DW.

Analyst Wolf says the involvement of Pakistan in the Kashmir conflict will always complicate the issue, as Islamabad's international reputation as an alleged Islamist hub is counterproductive for the Kashmir plight.

"One of Pakistan's foreign policy goals is to weaken India," he said.

"By encouraging militants in Kashmir, Pakistan has pushed India toward the present situation. Pakistani authorities believe that if India gets military involved in the Kashmir conflict, it will have a negative impact on India's economic growth and international repute. Also, India's rights violations in Kashmir helps the Pakistani military to justify its dominance inside Pakistan," Wolf underlined.

Toqeer Gilani, the president of Jammu and Kashmir Liberation Front in Pakistan-administered Kashmir, wants both India and Pakistan to step aside.

"We demand a solution to the Kashmir conflict based on freely expressed wishes of the people. It is high time India and Pakistan announce the timetable for withdrawal of their forces from the portions they control and hold an internationally supervised referendum," Gilani told DW.

But most Kashmir observers don't see it happening in the near future. They say that while the Indian strategy to deal strictly with militants and separatists in Kashmir has partly worked out, sooner or later New Delhi will have to find a political solution to the crisis.