The Islamization of Kashmir′s separatist movement | Asia | An in-depth look at news from across the continent | DW | 26.05.2017

The Islamization of Kashmir's separatist movement

Reports about a separatist leader joining al Qaeda have raised fears the Kashmiri movement is being "hijacked" by Islamists. Expert Agnieszka Kuszewska tells DW that Indian policies are partly to blame for this trend. 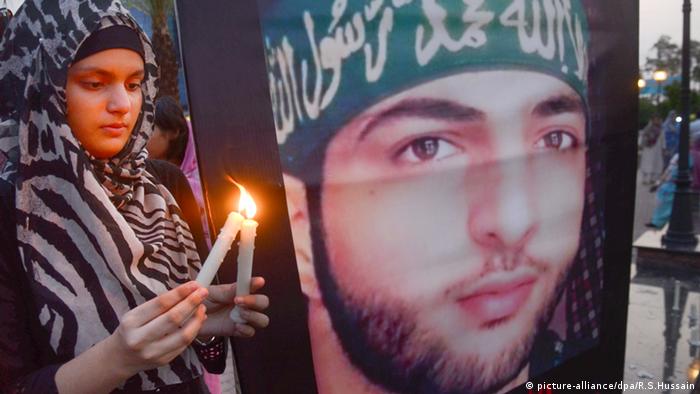 DW: Recently, Zakir Musa, an influential Kashmiri leader, distanced himself from the separatist movement and aligned himself with al Qaeda. Some experts fear that the decades-old anti-India movement is increasingly moving toward Islamization. Do you agree with this analysis?

Agnieszka Kuszewska: Zakir Musa is no longer associated with the Hizb-ul-Mujahedin separatist group. The organization admitted that Musa's statement about "chopping off the heads of Hurriyat leaders" is unacceptable and reflects his personal views.

Musa said he wanted to "impose Shariah in Kashmir," and that it should be done by force and not through consensus. The possibility of radicalization and the potential emergence of the so-called "Kashmiri Taliban" should not be neglected. However, the Hindu nationalist Bharatiya Janata Party's "muscular policy" in Kashmir is aggravating the situation. Some factions of the Kashmiri movement are likely to become more radicalized if India continues with its strong-hand policy in the valley.

Is Kashmir really an international issue?

India and Pakistan clashed over Kashmir at the UN earlier this week. But is the UN the right platform to take up the issue? New Delhi doesn't think so, and some Kashmiris think they are the ones who should be consulted. (23.09.2016)

Experts say that Pakistan's direct involvement in the Kashmir conflict began in the late 1980s, after which the somewhat liberal Kashmiri movement took on a more religious outlook. Do we now see it becoming more radicalized in terms of its possible alliances with global terror groups?

The rise of Islamic radicalism in the region, fostered by the Afghan War in the 1980s, had a direct impact on the Kashmir conflict. The anti-India movement became more Islamized in the 1990s with the influx of militants trained in Pakistan. Based on my interpretation of the available data and analysis of facts, I would say that the Kashmiri people do not support pan-Islamic, extremist outfits, and the majority of them are against the implementation of Shariah. Transnational terror groups do not enjoy big support in Kashmir.

When I see the "Welcome Taliban" graffiti in Srinagar, two things come to my mind: 1) Some young Kashmiris and militant groups show their support to these groups merely because they want to protest against grave rights abuses in the valley; 2) It may also be framed by the security establishment, which is notorious for enforced encounters and other human rights violations.

The new Kashmiri movement, driven mostly by angry youth, appears to be against both India and Pakistan. But how is it different from the pre-1990s movement that didn't pin hopes on Pakistan?

With continuing rights abuses by the security forces, the resistance attracts more and more people. The youth is prepared to risk their lives. The protesters now do not hide themselves; they record all abuses and share them with the world through social media. Burhan Wani, who was killed by the security forces in July last year, had perfected this new trend.

On May 23, the Indian army claimed it had targeted Pakistani military posts along the Kashmiri border to stop Pakistan from infiltrating armed militants into India-administered Kashmir. To what extent is Pakistan directly involved in providing weapons and military training to Kashmiri insurgents?

The infiltration does exist to some extent but it is not as high as it was in the 1990s. The Line of Control (LoC) is now strictly monitored, which makes it more difficult for the militants to cross over.

As I said before, the anti-India movement in Kashmir is not only militant, it is also indigenously civilian. However, there are elements in Pakistan that are still actively involved in supporting jihad in India-held Kashmir. Hafiz Saeed, the leader of the Islamist Jamatud Dawa organization, is portrayed as a hero of the Kashmiri resistance by some groups. A significant portion of Pakistani society supports Saeed and he is free to deliver speeches.

As Pakistan's international and regional isolation is growing, global powers pay more attention to India's narrative on Kashmir. Does it negatively affect the Kashmiri movement?

It is difficult to conceal what is going on in the valley. When renowned human rights activist Khurram Parvez was illegally banned from travelling to Geneva to attend the 33rd session of the United Nations Human Rights Council last year, there was an international outcry against his detention. Such retaliatory measures simply do not pay off.

On the other hand, I doubt that global powers would like to engage themselves directly in the Kashmir dispute apart from urging India and Pakistan to "resolve the conflict peacefully."

To what extent has India lost or is losing grip on Kashmir?

On April 9, an unarmed Kashmiri man was tied to a military jeep and was used as a "human shield" by the security forces to protect themselves from protesters. This image was truly disturbing: he was paraded in front of the people, humiliated and traumatized. The officer behind this incident was recently commended by the Indian army for his "counter-insurgency operations." What message does it give to the Kashmiri people? I would say that by resorting to violence, the authorities are turning the civilians against them and losing the grip on Kashmir.

In democratic countries, the civilian leadership determines the security policies. For decades New Delhi has proudly claimed that this is one of the features that distinguish it from Islamabad where the military pulls the strings. Now, it seems that this difference is diminishing.

There has been unrest in Kashmir since July last year. What, in your opinion, should be done to put an end to it?

The initiatives aimed at de-escalating violence in India-administered Kashmir should be multi-faceted and long-term. The security forces should be held accountable for their human rights violations so that the Kashmiri people would regain trust in state institutions. The rise of religiously-motivated nationalism is also a worrying phenomenon, especially in religiously and ethnically diverse parts of Kashmir. It is vital to address this trend.

Agnieszka Kuszewska is an associate professor of political science at the University of Social Sciences and Humanities in Warsaw. She is a member of the European Association for South Asian Studies and a board member of the Polish Association of International Relations.