Nuclear fears abound after India-Pakistan military escalation | Asia| An in-depth look at news from across the continent | DW | 27.02.2019

Pakistan has claimed to have shot down two Indian jets a day after New Delhi "targeted a militant camp" on its soil. The confrontation could escalate into a full-blown war between these two nuclear-armed countries. 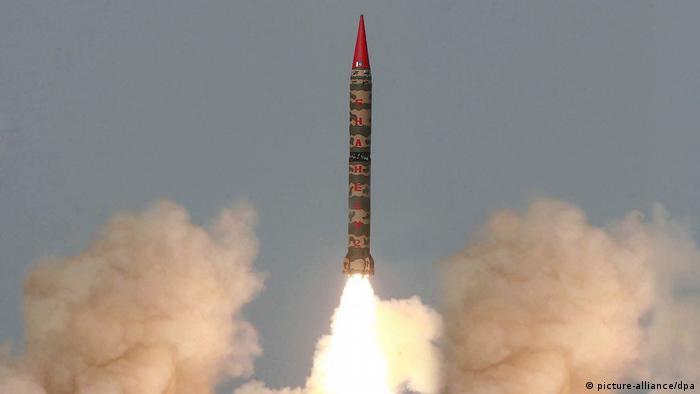 India and Pakistan are once again on the verge of a full-scale war. It is an unimaginable scenario as the two South Asian neighbors possess high-tech nuclear arms. They have fought three wars over Kashmir, which they both claim in full, but rule in part. Any escalation of military conflict between the two countries has a dangerous risk of a nuclear confrontation.

New Delhi justifies its airstrike inside Pakistan by saying that it targeted a militant camp run by the Pakistan-based Jaish-e-Mohammed (JeM) militant group. JeM seeks the India-administered Kashmir's "independence" from New Delhi.

The group claimed responsibility for the February 14 suicide bombing in Kashmir's Pulwama district, which killed more than 40 Indian troops. JeM, which allegedly has links to al Qaeda, regularly targets government installations in India-administered Kashmir. So India claims its military operation was actually an act in self-defense.

Pakistan, on its part, denies any involvement in the Pulwama bombing. Pakistani Prime Minister Imran Khan told New Delhi that his government was ready to take action against JeM if it provided concrete evidence about its involvement in the deadly attack. Islamabad also denies backing any Islamist group in Kashmir or anywhere else in the region.

A day after India's military action, Pakistan said its aircraft launched strikes across the de-facto border from within Pakistani airspace. Islamabad also claimed that it shot down two Indian jets near the Kashmir border. The escalation, many fear, has increased the risk of a full-fledged military confrontation between the two nuclear-armed countries.

The biggest worry for the international community at the moment is that this could lead to a nuclear confrontation. Although, both countries have played down the risk of a nuclear war, regional and international players remain watchful.

Read more: US asks India and Pakistan to 'exercise restraint'

"All wars are miscalculated, and no one knows where they lead to," Pakistani PM Khan said in his address to the nation on Wednesday following Pakistan's retaliatory strikes against India. "World War I was supposed to end in weeks, it took years. Similarly, the US never expected the war on terrorism to last 17 years," he added.

"I ask India: with the weapons you have and the weapons we have, can we really afford such a miscalculation? If this escalates, things will no longer be in my control or in Narendra Modi's," the prime minister continued. 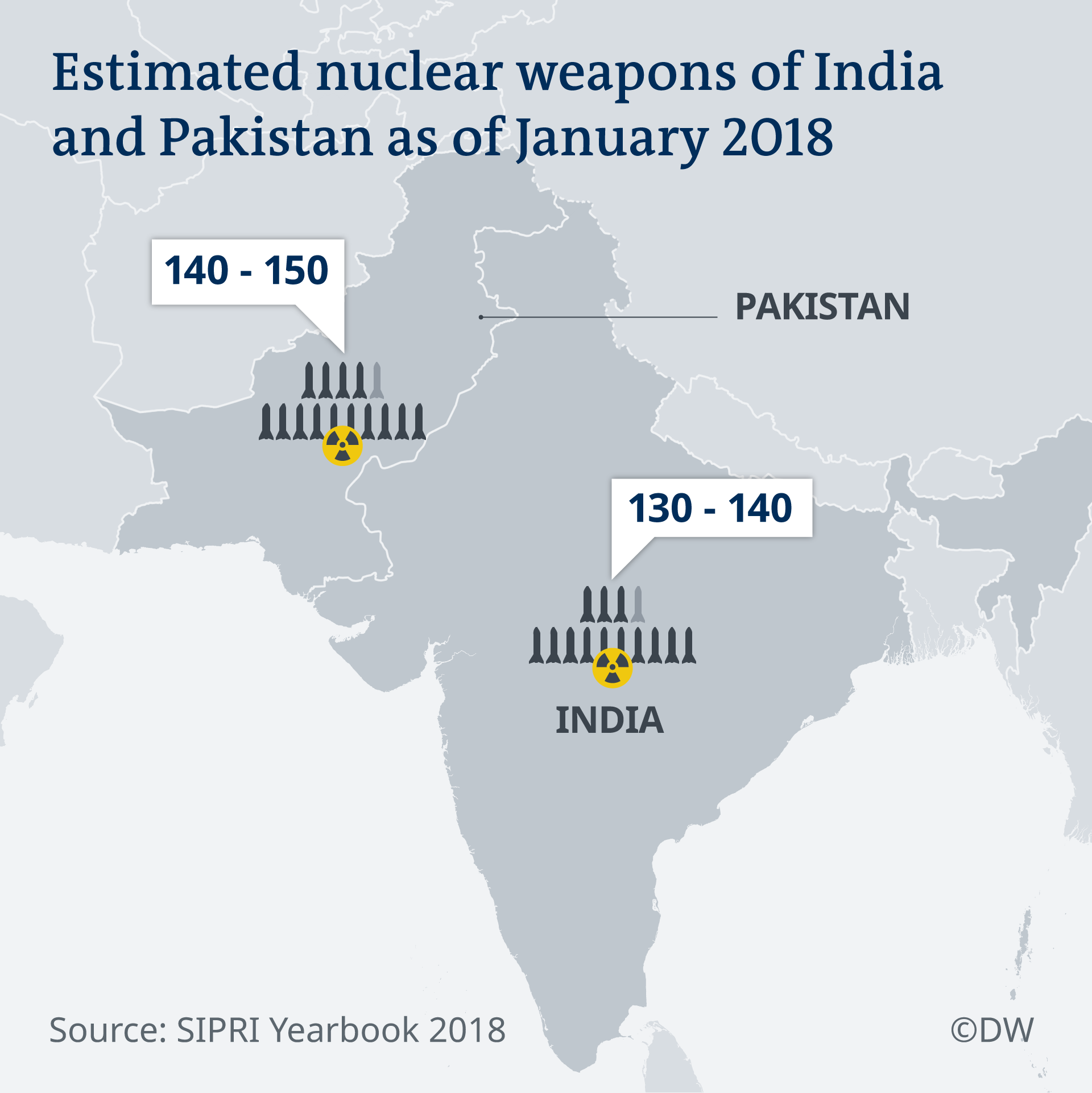 Both India and Pakistan have ballistic missiles capable of delivering nuclear weapons. According to the Washington-based Center for Strategic and International Studies (CSIS), India possesses nine types of operational missiles, including the Agni-3 that can reach targets up to 5,000 kilometers. Pakistan's missiles, built with Chinese support, can also reach any part of India, CSIS said.

Both countries also have smaller nuclear warheads that can be attached to short-range missiles (50-100 kilometers). According to the Stockholm International Peace Research Institute (SIPRI), Pakistan is estimated to have around 140 to 150 nuclear warheads, compared to India's 130-140 warheads.

Analysts agree that Pakistan's nuclear weapons program is driven by its perception of the threat posed by India. "Pakistani officials state that their nuclear weapons are 'India-specific,' and as India's military power grows — with its much larger economy, it is able to invest more in modern military capability — Islamabad believes it needs more nuclear weapons to maintain deterrence with India," Toby Dalton, a co-director of the Nuclear Policy Program at the Carnegie Endowment, told DW in a previous interview.

Gregory Koblentz, an associate professor at George Mason University and author of a 2015 Carnegie report "A normal nuclear Pakistan," says that the Pakistani military has adopted a strategy of "full spectrum deterrence" so it can "continue to engage in asymmetric warfare against India and deter even limited Indian conventional military retaliation with the threat of tactical nuclear weapons." This inequality between Indian and Pakistani military strengths could pose a huge risk, experts say.

Michael Kugelman from the Washington-based Woodrow Wilson Center for Scholars is of the view that because Pakistan's conventional military capacity is much inferior to that of India, the possibility of a nuclear conflict thus increases. "Pakistan's retaliatory action in the present scenario could be met with a destructive Indian response. If that happens, we have to start worrying about a nuclear scenario," Kugelman said.

But Talat Masood, a former Pakistani army general and defense analyst, told DW that he does not think the latest Kashmir conflict could escalate into a nuclear conflict. "Yes, there are fears because the tension is rising and no talks are being held. Pakistan has offered talks but India will not hold such talks because of the [upcoming] elections there," Masood said.

"Everyone expects that the situation will de-escalate and they could be right. But in contrast to the Kargil episode of 1999, when two Indian aircraft were shot down after they crossed on to the Pakistani side, this time the United States will be absent as mediator," Pervez Hoodbhoy, an Islamabad-based nuclear physicist, told DW. "In the absence of international mediation, the crisis could grow steadily," he added.

"For now, Pakistani rhetoric lacks the shrillness of that in India, where Modi's re-election as prime minister may depend on his being seen as tough on Pakistan," Hoodbhoy said. "In contrast Pakistan's official military spokesman has spoken in relatively measured terms and ruled out use of nuclear weapons," he noted. "Still, one cannot predict what might change this. Pursuing all initiatives for peace is clearly urgent."

The concerns regarding a potential nuclear confrontation between India and Pakistan are also heightened by the threat posed by militant groups active in Pakistan — groups like Tehrik-e-Taliban Pakistan (TTP), "Islamic State" (IS) and al-Qaeda in the Indian Subcontinent. Any war or a war-like situation could trigger immense chaos in the South Asian country and pose the danger of nuclear weapons falling into the hands of "non-state actors."

Islamabad-based defense analyst Maria Sultan, however, insists that Pakistan's nuclear command and control authorities have a strong grip on the country's nuclear assets. "Pakistan has the capability of monitoring its nuclear weapons, and the technology it is using to do that is very sophisticated," Sultan told DW. She insisted that the West's concerns about Pakistan's nuclear safety were "unfounded."

But some experts believe that a nuclear arsenal is "never safe." "On the one hand there is perhaps a hype about Pakistani bombs in the Western media, on the other there is genuine concern," Sweden-based Pakistani researcher Farooq Sulehria told DW. Despite the concern, political and defense analyst Zahid Hussain told DW that the West was "unnecessarily worried."

"Pakistan conducted its nuclear tests more than 15 years ago. Nothing has happened since then. Pakistan has made sure the nuclear weapons remain safe." 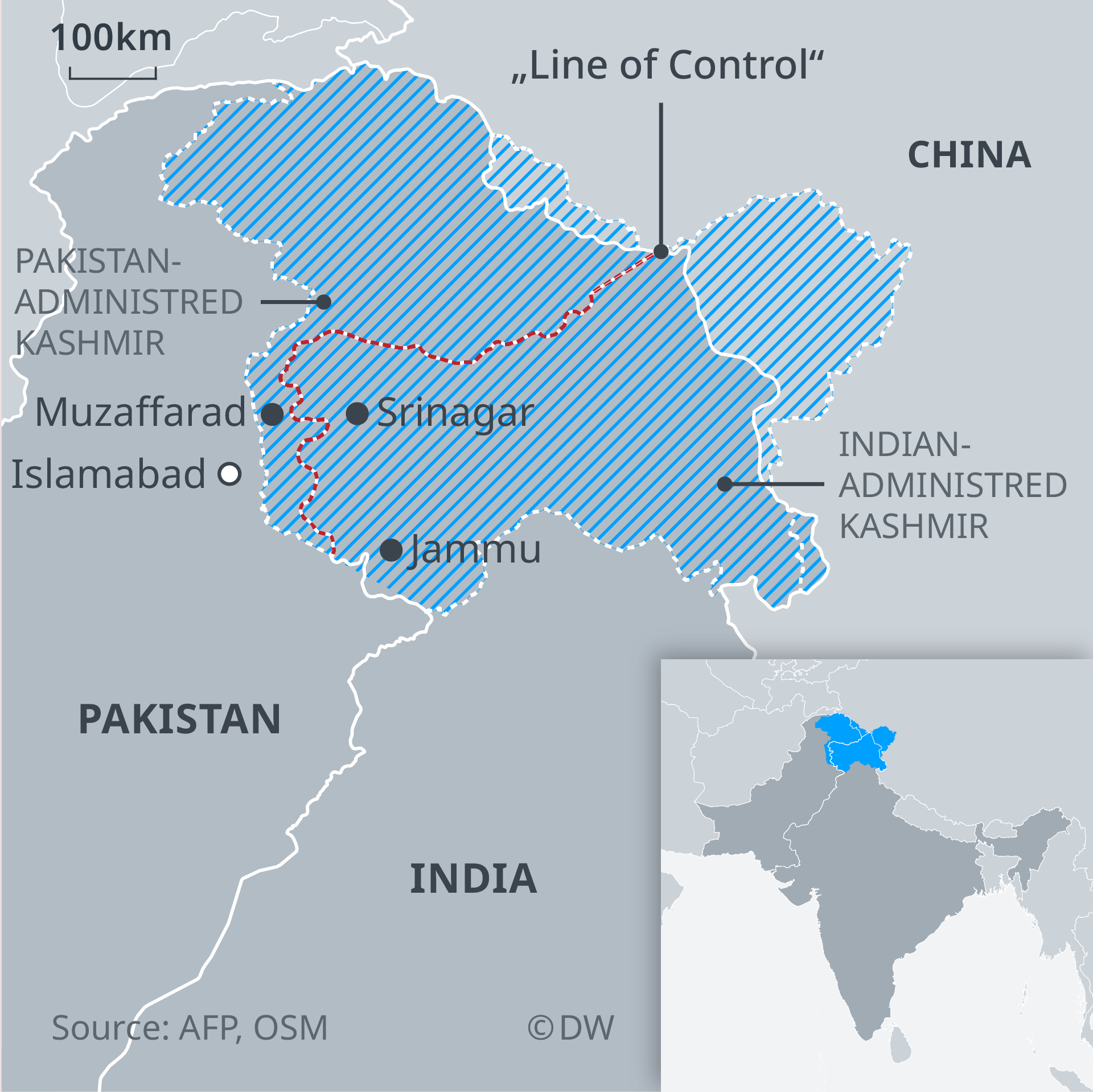 Efforts to avoid an India-Pakistan war are already underway and experts say that the nuclear threat could be a big factor for the international community to bring Islamabad and New Delhi to a dialogue.

"I think that in the past the US' invisible and visible pressure worked to calm the situation like during the Kargil crisis [in the late 1990s]. So, Washington should mediate behind the scenes to calm down the situation. If the US and international community do not intervene then the situation will get the worse," Masood underlined.

The US has already urged Islamabad and New Delhi to engage in a dialogue. "We encourage India and Pakistan to exercise restraint, and avoid escalation at any cost," US Secretary of State Mike Pompeo said in a statement on Wednesday. India, too, is now seeking to ease tensions with Pakistan, with Foreign Minister Sushma Swaraj saying New Delhi "does not wish to see further escalation of the situation."

Kartarpur corridor: Can India and Pakistan bring down their 'Berlin Wall'?

In a rare sign of cooperation between South Asia's two nuclear-armed rivals, India and Pakistan agreed to set up a visa-free corridor that will allow Sikhs to easily visit their shrines on each side of the border. (28.11.2018)