An attempt to amend a provision in the Indian constitution that allows only long-term residents of Kashmir to own land has sparked a controversy. Muslim groups consider it a bid to alter the state's demography. 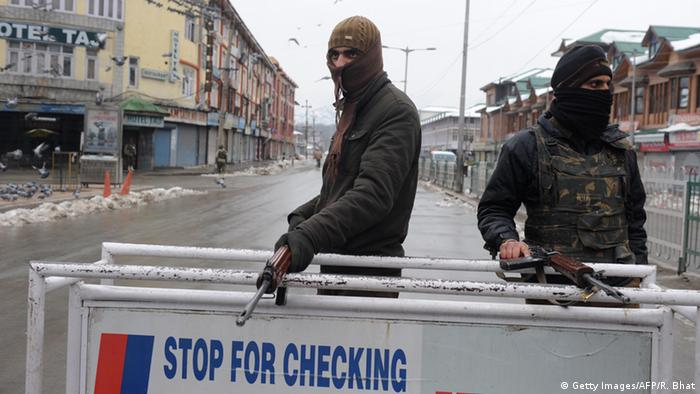 A Hindu right-wing group's proposal to amend Article 35A of the Indian constitution is being viewed in India-administered Kashmir as an attempt to undermine the special status of the volatile state that is in the throes of a violent separatist insurgency.

This constitutional privilege, which was introduced through a presidential order in 1954, accords special rights and privileges to the Jammu and Kashmir citizens and denies property rights to people who come to live in the state.

The constitutional provision grants Kashmir a unique status within India that allows the state to have its own constitution, a separate flag and autonomy in all matters except foreign affairs, defense and communications.

Article 35A also allows the state legislature to define the list of "permanent residents," who are eligible to vote, work for the state government, own land, secure public employment and college admissions.

Its legality has been challenged by a right-wing Rashtriya Swayamsevak Sangh-backed think tank, the Jammu and Kashmir Study Center, and a non-governmental organization, We the Citizens, demanding the provision be struck down due to its "unconstitutional character." The groups have filed a petition in the Indian Supreme Court, arguing the special provisions are discriminatory.

The Rashtriya Swayamsevak Sangh (RSS) is the ideological arm of the ruling Bharatiya Janata Party (BJP).

A further challenge to the Kashmir status has been mounted by a lawyer, Charu Wali Khanna, on the basis of gender discrimination.

The petitions are widely seen in Kashmir as an attempt by right-wing Hindu nationalist groups to alter Kashmir's demography.

"It will be an assault on the Muslim identity of Jammu and Kashmir and could change the demographic character of the state," lawyer Zaffar Shah told DW.

"If the provision is amended, all hell will break lose. The fragile relationship that Kashmir enjoys with New Delhi will be broken forever," political analyst Basheer Manzar told DW.

- The Islamization of Kashmir's separatist movement

India's top court is contemplating setting up a bench to verify the validity of the provision.

"When the constitutional validity of an article is under challenge, it has to be referred to a constitutional bench under Article 145," said Supreme Court judges Dipak Misra and A.M. Khanwilkar earlier this week.

"The special status of the state is enshrined in the constitution and it cannot be tampered with or removed. It is an article of faith. Both provisions are two sides of the same coin," said Omar Abdullah, a former Kashmir chief minister.

Fears that the special status could be in jeopardy has galvanized the region's political parties, including the ruling People's Democratic Party (PDP) and the opposition National Conference.

The controversy could plunge India-administered Kashmir into further turmoil as the Himalayan region has been in the grip of violence since July 2016.

"All political parties are concerned. Questioning Article 35A is synonymous with questioning the accession of Jammu and Kashmir. It is very serious," Ali Mohammad Sagar, a National Conference legislator, told DW.

Kashmir's Chief Minister Mehbooba Mufti, whose PDP party is in an alliance with the BJP, has slammed the move and said the Kashmiri political parties would jointly oppose it.

The BJP says the residents of Kashmir should be given a chance to hold a referendum whether they want Article 35A to remain in the constitution or not.

"The PDP and the National Conference are only trying to play up fear," Pawan Rana, the BJP state secretary, told DW.

Memories of the Amarnath Shrine row are fresh in the valley. In 2008, a violent clash erupted when the state government promised to give a piece of land to a trust that administers the Amarnath Shrine. Clashes erupted following the proposal and snowballed into one of the biggest pro-independence demonstrations in Kashmir killing 40 people and injuring hundreds. The government eventually had to withdraw the proposal.