India has usually adopted a "non-aligned" foreign policy, but since Prime Minister Modi came to power in 2014, New Delhi has shown more assertiveness in international relations, particularly in its dealing with Pakistan. 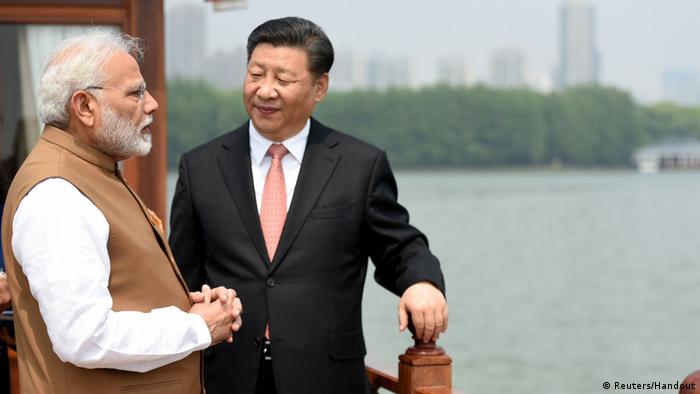 Indian Prime Minister Narendra Modi did not have any foreign policy experience prior to his Bharatiya Janata Party (BJP) taking over the reins of the country following a remarkable general election victory in 2014. As chief minister of the western state of Gujarat, he was known for his expertise in handling the economy, but after becoming prime minister, he had to prove his skills in foreign policy also.

After coming to power, Modi faced a difficult task of image building. The 2002 Gujarat communal riots, in which more than 2,000 people – many of them Muslims – were killed, had left a negative mark on his role as the state's chief minister.

Modi, a deft politician, began his diplomatic offensive immediately after his BJP secured a majority in the 2014 parliamentary polls. He invited many regional leaders, including Pakistan's former PM Nawaz Sharif and ex-Afghan President Hamid Karzai, to his oath-taking ceremony. Experts say that Modi wanted to shed the Gujarat chief minister image and present himself as a statesman.

But TCA Rangachari, a former Indian ambassador to Germany and France, believes Modi's initial foreign policy gestures did not suggest a major change. "Foreign policies don't change that rapidly. I believe that Modi's foreign policy has been a continuation from his predecessors," Rangachari told DW.

While Modi was Gujarat's chief minister, he was banned by Washington from traveling to the US due to his controversial human rights record. The US, however, lifted the ban after Modi became India's premier.

In September 2014, Modi visited the US and addressed the Indian diaspora in New York's Madison Square Garden. He also held talks with Former US President Barack Obama. Modi's "diplomatic showmanship" made headlines in India as well as in the US.

India under PM Modi, however, has appeared to drift away from its long-time ally Russia. Although New Delhi and Moscow have cordial relations, India is now closer to Washington than ever.

India's relations with some of its neighboring countries have always been problematic. India views China and Pakistan as its biggest security challenges in the region. This aspect of India's foreign policy has remained unchanged for the past few decades.

But security analysts say that unlike his predecessors, PM Modi has chosen to be more assertive when it comes to national security. As an example of this assertiveness, they point to India's "surgical strike" against suspected militant hideouts in Pakistan in response to a deadly attack on Indian troops in Kashmir in February.

While Modi received domestic praise for his military action on Pakistani soil, the war-like situation between India and Pakistan was not appreciated internationally.

Former ambassador Rangachari believes that Modi wanted to convey a message to Islamabad that India was ready to talk on the militancy issue but only if Pakistan withdrew its alleged support to terrorists.

Modi's China policy, meanwhile, hasn't succeeded in resolving the tensions and mistrust between the two nations. In April 2018, the Indian prime minister met with Chinese President Xi Jinping at a bilateral summit in Wuhan. The meeting was touted as a milestone in India-China relations; however it failed to deliver concrete results.

Another setback to Indian foreign policy was China's initial refusal to support New Delhi's UN bid to designate Masood Azhar, the head of the Pakistan-based Islamist group Jaish-e-Mohammad, as a terrorist. Beijing eventually lifted its objection on the move on May 1.

"While India believes that [international] relations should be governed by principles, China has not paid heed to India's concerns," Rahul Mishra, an expert at the Kuala Lumpur-based Asia-Europe Institute, told DW.

Although both China and India have increased bilateral trade and enhanced border control, there is a perception in India that Beijing is unwilling to cooperate on key security issues.

New Delhi is also skeptical of China's Belt and Road Initiative (BRI), which it considers a regional security threat. Rangachari says that India is not alone in expressing concerns about the BRI.

"Many countries that have received Chinese loan under the BRI have drowned in debt. Take the example of Sri Lanka's Hambantota port, which has been given to China on a 99-year-lease. If this trend continues, China will occupy territories the same way former colonial powers did in the previous century," Rangachari underlined.

Analysts say the Act East policy, unlike other diplomatic efforts, gives an equal importance to economic relations and security interests. As a result, India has been more vocal about free maritime navigation and a rules-based order for maritime security, especially in the South China Sea, and has also signed a deal with Indonesia to build the Sabang port, located in the strategically important Malacca strait.

Overall, observers argue, Prime Minister Modi has changed India's diplomatic outlook in several ways. He has reset his country's relations with the West, especially the US, in a bid to counter China's growing influence in Asia. Modi has also taken a more aggressive stance toward Pakistan's alleged terrorism backing, and has increased engagement with partners in East and Southeast Asia. Modi has also forged stronger alliances with countries in the Middle East.

Experts say that should Modi be re-elected, India would follow the same foreign policy direction as it has pursued in the past five years, albeit more vigorously.