The Indian economy has grown under Prime Minister Narendra Modi, who came into office on a wave of economic populism. But anyone who thought India's growth would explode like its Asian neighbor China will have to wait. 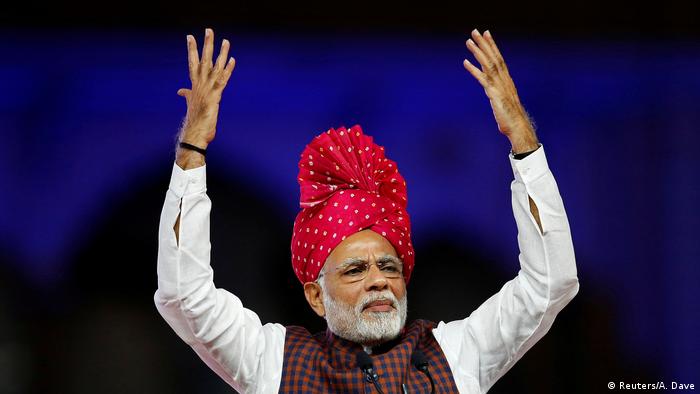 When Indian Prime Minister Narendra Modi took office five years ago, he launched a series of ambitious economic programs, including "Make in India," "Skill India" and "Digital India." After Modi's Bharatiya Janata Party (BJP) won a majority in parliament, he promised to usher in a new era of prosperity for his country.

Indeed, during Modi's time as chief minister of Gujarat between 2001 and 2014, this state on India's west coast grew into one of India's most successful economies. And many voters supported Modi and the BJP in 2014 because they considered him to be a leader who would take the economy in the right direction.

German business also had big expectations for India in 2014, and hoped it would churn out a similar economic miracle like what China had in place over the previous decade. However, after five years of "Modinomics," it is clear that it is tough to compare India and China.

"The hopes of German business leaders that India would develop into a dynamic business and export partner like China did not come true," Wolfgang-Peter Zingel from the South Asia Institute at Germany's Heidelberg University told DW.

A world of difference

Although India meanwhile shows stronger economic growth than China, it started from a much lower base. And when it comes to the production of goods, there is still a world of difference between the two.

"China's trade in goods is therefore more than five times larger than that of India. China has a high export surplus, but India, relatively speaking, has an even higher export deficit," said Zingel.

Read more: Can India become the next China for carmakers?

Doing business in India has also been complicated for foreign corporations. In 2009, the director of the German-Indian Chamber of Commerce in Mumbai, Bernhard Steinrücke, wrote in the German business daily Handelsblatt that foreign companies needed a lot of patience to operate in India.

"They don't work in the afternoon in India," wrote Steinrücke in 2009. "You have to approach the country as a strategic market, and invest a lot of money and manpower."

Although India's economy has grown rapidly since 2009, it has not experienced a boom similar to that of China.

It is difficult to determine whether India has been underperforming economically and — unlike China — has yet to fully take advantage of its enormous potential for development.

"Determining whether the country is not living up to its economic potential depends on how you measure what that potential is supposed to be," said Zingel.

"A comprehensive economic concept, along with the will and ability to enforce it, is still missing."

However, for the Indian government, one thing is very clear: New Delhi wants to grow the country's economy to the level of China and the United States.

In full BJP campaign mode earlier in April, Indian Finance Minister Arun Jaitley promised Indians a bright economic future and said India's GDP would jump to $10 trillion (€8.9 trillion) by 2030. That would put India's economy the third largest in the world behind the US and China. According to Jaitley, India's current GDP is around $2.9 trillion (€2.6 trillion).

The finance minister also said that India would reduce the number of Indians living in extreme poverty over the next three years to under 15% of the total population. He also promised to create millions of new jobs.

Jaitley knows that he must paint a bright image of the future for potential BJP voters after Modi's government disappointed the high expectations for India's job market. However, foreign investors remain positive over India's economic potential.

German companies, according to Steinrücke, have an overall positive attitude towards the economic course that has been set out by Modi over the past five years.

"The tax system reform especially was considered an improvement that will allow for greater efficiency, despite some of the difficulties it faced at the start," he said.

Steinrücke added that the 30 largest German corporations alone currently directly and indirectly employ more then a half a million people in India.

However, even if Modi is re-elected, foreign companies will need to remain patient, as it will take time for each Indian market to open, and in certain sectors it will be a very long wait.

"As far as the economy is concerned, Modi's goals are clear: market-oriented to some extent, not too liberal, and with a solid role for state-owned enterprises," said Zingel.