German EU election results ramp up pressure on Merkel′s coalition | Germany | News and in-depth reporting from Berlin and beyond | DW | 26.05.2019

Germany's major parties have slumped again in the elections for the European Parliament, with the Social Democrats particularly hard-hit. The result could potentially accelerate Chancellor Angela Merkel's departure. 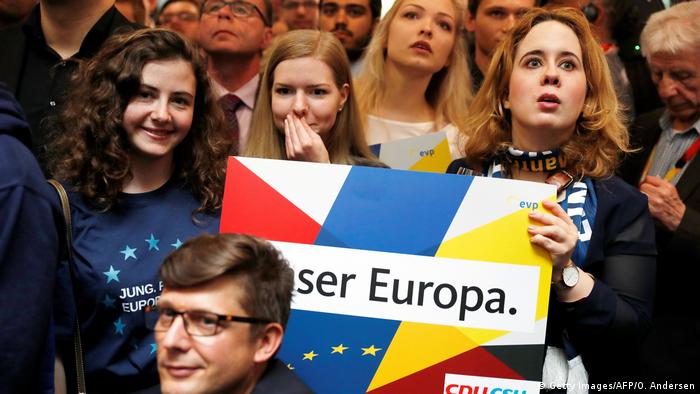 Germany's two major parties took another significant blow in the European elections on Sunday, as voters continued to flee the traditional political center. A major migration to the Greens suggests that the electorate is demanding stronger action to protect the climate.

Angela Merkel's Christian Democrats (CDU) and the allied Bavarian Christian Social Union managed to win a combined 28.7% of the vote, down 7 points from the European Parliament election in 2014, and their worst result in a nationwide election ever. Her junior coalition partner, the Social Democrats (SPD),  only received 15.6% — an 11-point drop from its 2014 result — putting it in third place.

The latest humiliation for the center-left SPD could prove to be the more significant one for Merkel. The SPD's decline in recent years, marked by steadily worsening election results, has seen growing unrest within the party, especially on its left flank, where dissatisfaction with the grand coalition with the CDU has been building for years.

Sunday's result will only have strengthened that feeling, reinforced as it was by a historic defeat in the election in Bremen, Germany's smallest state, where the SPD looks set to come second to the CDU and lose power in the city for the first time in seven decades.

Could the coalition crumble?

Should the SPD's left wing win the internal power struggle, there is a chance that the venerable party will walk out of the coalition with Merkel, triggering new elections.

With the chancellor having already announced that she would not run again, and her successor as CDU leader, Annegret Kramp-Karrenbauer, waiting in the wings, there has already been speculation that Sunday's results could accelerate Merkel's departure.

But leading figures in the CDU played down the notion that the government would crumble.

CDU General Secretary Paul Ziemiak told broadcaster ZDF that the coalition "had to keep going" to "ensure stability" in the country. Ziemiak also admitted that the results for the CDU "did not meet our expectations," though he said his party had "done its part" in helping Manfred Weber to his hoped-for post as president of the European Commission.

Weber was the leading candidate for the center-right European People's Party (EPP), the bloc that the CDU belongs to, putting him in pole position to take over from Jean-Claude Juncker when the new Commission is elected in the fall.

Ziemiak's opposite number in the SPD, Lars Klingbeil, was more evasive on the coalition question, saying only that "the result cannot remain without consequences." He added that the SPD had much to discuss in the coming hours and days.

That was echoed by SPD leader Andrea Nahles, who said the "extremely disappointing" results showed that the party "still had much to do." Questions were also raised about her leadership in the aftermath of the result.

Kramp-Karrenbauer, meanwhile, also acknowledged that the CDU had underperformed. "This election result is not a result that does justice to our expectations of ourselves as a people's party," she said in a speech to party members.

But she celebrated hitting what she said were the CDU's two main targets of the day: coming in first in the EU election and defeating the SPD in Bremen. But the EU result, and the significant drop, is likely to reflect poorly on her as a new leader, too, since Merkel had largely kept out of the campaign.

Standing beside her, Weber said the result was a victory for democracy and called on other EU partners to set an agenda for the next five years.

Read more: Germans split over deepening ties with the EU

The Greens' massive success in Germany, nearly doubling its 2014 result to win more than 20% of the vote, was apparently in large part down to its new popularity among young voters. A statistic published by Infratest dimap in the evening revealed that 36% of Germany's first-time voters went for the Greens, more than three times as many as voted for Merkel's conservatives.

Other German politicians acknowledged that she was probably right: The climate crisis had been the major issue in the campaign, and they had failed to take a clear line.

The SPD's leading candidate, Katarina Barley, admitted that her party had perhaps not been well-prepared on that front. Nevertheless, Barley told her followers, "I gave everything I could, I couldn't do anymore," to a long and emotional round of applause.

The European election will also bring a minor reshuffle in Merkel's Cabinet, with Justice Minister Barley announcing in advance that she would step down after the election to take up her seat in the European Parliament.

Exit polls and results have begun coming in across the European Union. Read the latest here. (26.05.2019)

Angela Merkel had fueled speculation she was seeking a top EU post after she spoke about her "renewed sense of responsibility" for Europe in an interview. Her final term as German chancellor is scheduled to end in 2021. (16.05.2019)