Partial results show significant losses for the dominant conservative and center-left blocs, while the Greens, Liberals and euroskeptic parties made gains. The European Parliament is set for a new balance of power.

Millions of voters across the EU cast their ballots on the final day of voting for the European Parliament elections, in a poll that will shape the continent's politics for the next five years.

The results indicate the European Parliament will have a new balance of power, with the centrist Alliance of Liberals and Democrats for Europe (ALDE), far-right euroskeptic parties and the Greens/European Free Alliance all making gains.

The parliamentary arithmetic will make for complex jostling for the EU's top five posts when the 28 national European leaders meet in Brussels on Tuesday.

Provisional results have put the EPP in first place with 179 seats, down sharply from 216 seats in the 2014 election. The conservative bloc was followed by the S&D with 150 seats, a drop from 185 seats in the last election.

ALDE and its allies came in third with 107 seats, a huge jump from 69 seats in the last election. They were followed by the Greens/European Free Alliance with 70 seats, up from 52 spots in the last parliament. The European Conservatives and Reformists Group (ECR) won 58 seats.

The two euroskeptic blocs, Europe of Nations and Freedom Group (ENF) and Europe of Freedom and Direct Democracy (EFDD), won 58 and 56 seats, respectively. Combined, the euroskeptic parties picked up 33 seats compared to the last election.

Updates for the EU elections live ticker have come to an end. Click here for an analysis of the day's events and trends in the individual EU member states.

24:00: Britain is emerging from the vote polarized as it tries to leave the EU by October. Nigel Farage's Brexit Party was on track to take first place, though the combined smaller pro-EU parties outpaced the hard Brexit party. Both the Conservatives and Labour lost major support.

23:14: The leaders of the two largest blocs in the European Parliament have said they would not work together with far-right, euroskeptic groups that made gains in the vote. Manfred Weber of the EPP and Frans Timmermans of the S&D are front-runners to become European Commission president. The election results mean the next head of the EU executive will need to get the support of at least one other party outside the traditional EPP and S&D coalition.

23:05: Hungarian Prime Minister Viktor Orban told supporters that his Fidesz party, which won 13 of Hungary's 21 seats in the EU Parliament, "will cooperate with everyone who wants to stop immigration."

Fidesz was suspended from the EPP bloc over the deterioration in the rule of law in Hungary. Orban did not address speculation that Fidesz could join Italy's Matteo Salvini's far-right bloc, the ENF. 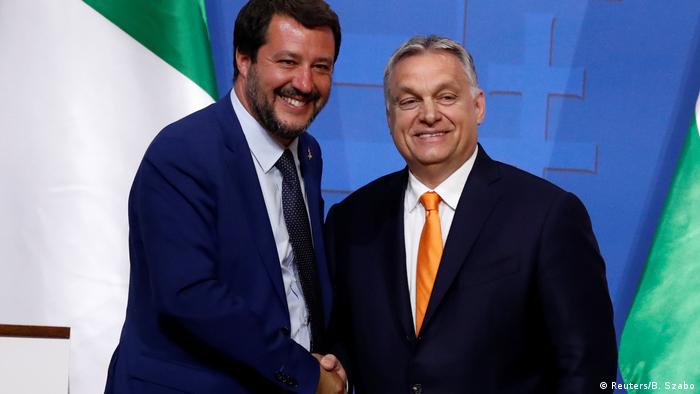 21:26: Portugal Prime Minister Antonio Costa's Socialists are projected to remain the top party in the country, with 32.5% of the vote, down only 1.5%. Costa faces an national election in October.

The Social Democratic Party secured second place with 23%, while the Left Block came in third at 10.3%

21:05: Italian Interior Minister Matteo Salvini's far-right League has come first in the polls in Italy with 27 to 31% of the vote, according to an exit poll published by RAI television. That is a major surge in support for the anti-immigration, euroskeptic hard-liner whose League gained 17% at the 2018 national election and 6.2% in the last EU vote.

The initial results may change the balance of power in Italy coalition, giving Salvini more weight in pushing his agenda.

21:03: Greek Prime Minister Alexis Tsipras has called snap elections for June after support for his leftist Syriza fell below that of the conservative opposition New Democracy.

20:59: David McAllister, a German Christian Democrat and a member of the European Parliament's conservative EPP group, told DW that the surge of the Greens in Germany meant that conservatives and Social Democrats had to do more about climate change.

"There must be reasons why the Christian Democrats and especially the Social Democrats lost in high numbers and that the Greens gained a lot of percent. We were talking in this campaign about the economy, about security, about stability, about important issues. But obviously the issue of climate change is at the moment the number one issue in Germany," he said. 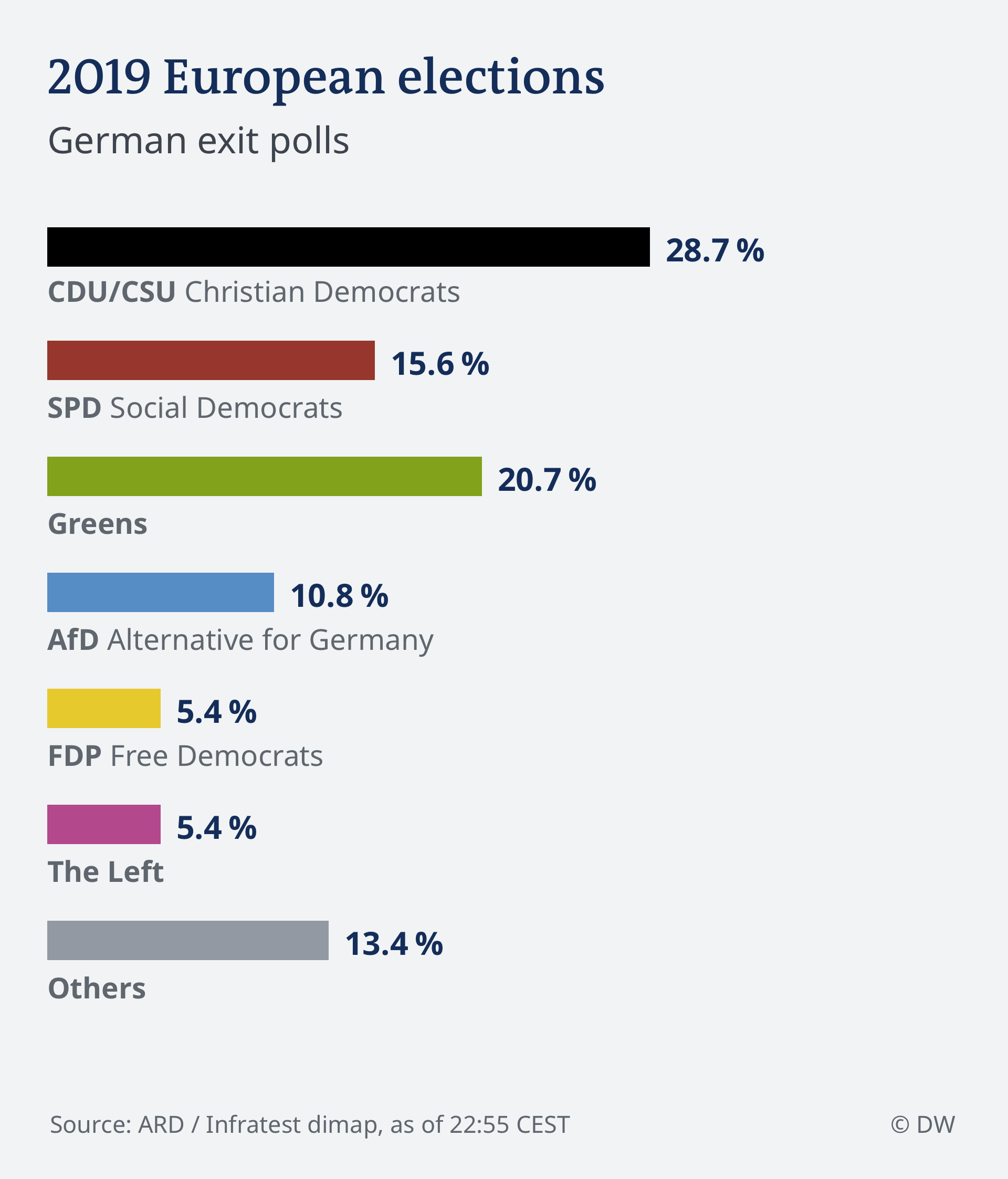 20:20 Romania's ruling Social Democrats (PSD) have suffered a blow in polls, gaining 26% of the vote compared to 45% in the 2016 national election, according to exit polls. The PSD has come under pressure from the EU over judicial reforms and undermining the fight against corruption. In apparent voter blowback against the PSD, the pro-European opposition National Liberal Party, or PNL, and centrist USR-PLUS alliance combined gained more than 50% of the vote.

Center-right President Klaus Iohannis, a critic of the PSD, said the polls showed voters were "in favor of a European Romania."

"The government formed by the PSD has to go," he said.

19:01 Poland's ruling nationalist Law and Justice (PiS) party was ahead with 42% of the vote, according to exit polls conducted by Ipsos. The opposition European Coalition - a pro-Europe group comprising the Civic Platform formerly led by European Council President Donald Tusk - scored second with 39.1%.

18:40 The European Parliament's first seat projection confirms a collapse of the grand centrist coalition between the center-right European People's Party (EEP) and the center-left S&D blocs.

18:14  Manfred Weber, the CDU politician tapped to lead the European Commission for the EEP, said the high voter turnout across the bloc is the "most important" news from the polls.

18:10 In Spain, pollsters said that the Socialist party was in the lead. It looked set to win 18 seats, up from 14 in 2014, while the far-right Vox was seen getting its first EU lawmakers, with four to five seats.

Macron called the result "respectable" and said that most voters had chosen pro-European parties.

17:45 The Greens/European Free Alliance group in the EU Parliament says they're delighted with exit polls showing a strong result for Germany's Greens in the European elections. Co-leader of the group, Phillippe Lamberts from Belgium, told DW's Max Hofmann the Greens/EFA would use the leverage that European voters are giving them to really influence policies from now on.

"Everything that we are hearing from various member states so far, points to a surge in the Green results — and that to me gives us a strong mandate for change in European policy."

"The Fridays for Future (protests) have helped in making people aware of the urgency of change, but quite obviously that's not enough. Because if there had not been a strong Green Party (in Germany) to start with, this popular energy would have had no way to express itself in politics."

17:25 Hungary's nationalist Fidesz party has won 56% of the vote in the EU election, according to pro-government pollster Nezopont. Fidesz was recently suspended from the EU's biggest bloc, the center-right European People's Party (EEP), over the deterioration in the rule of law in Hungary.

17:09 In Germany, the latest projections put Chancellor Angela Merkel's Christian Democrats (CDU) and its Bavarian sister party the CSU ahead with 28.3% , down 7.5 points. The CDU's coalition partner the Social Democrats (SPD) is on track for its worst performance in EU elections, picking up 15.2% of the vote, down 12.1% from the last vote in 2014.

Riding a wave of support from growing concerns about climate change, the Green party came in second in Germany with 21.1%, an increase of 11%. The far-right AfD came in fourth with 10.6%, and the pro-business Free Democrats (FDP) and the Left party each got 5.6% of the vote. Other smaller parties made up the remaining 13.6%.

16:58 In the Netherlands, the Labor Party (PvdA) was leading, according to initial results, with 18.1%, a huge jump from the 9.4% it received in 2014. Prime Minister Mark Rutte's People's Party for Freedom and Democracy (VVD) came in second with 15%, gaining 3 points on its previous result.

The far-right Party for Freedom (PVV) took a nosedive from its 2014 result of 13.32%, getting only 4.1% of the Dutch vote. Its votes appeared to have been snatched by Thierry Baudet's euroskeptic Forum for Democracy, which captured 11%.

16:54 The center-right EEP is projected to be the largest grouping in the European Parliament with 163 seats, according to figures published by Germany's Infratest dimap.

The Party of European Socialists is projected to garner 147 seats, while the liberal ALDE grouping is on track to pick up 96 seats. Parties in the far-right EAPN grouping could see significant gains with 72 seats, Infratest dimap projections showed.

16:52 Broadcaster ZDF has reported that Germany's under 30 population overwhelmingly voted for the Green party:

16:44 Ireland's Fine Gael party, which currently rules in a minority coalition government, was leading in initial projections with 29%. Fianna Fáil came in second with 15%, as did the Green party. This was a massive upswing for the Greens, who garnered only 4.9% in 2014. Sinn Fein had only 13%, a tumble of 6.5%.

16:39 Germany's public broadcaster ARD said that voter turnout in Germany jumped nearly 11% from 48.1% of registered voters in 2014 to 59% in Sunday's EU elections.

16:31 In Greece, the conservative opposition New Democracy party is the projected winner, according to exit polls. New Democracy is projected to win 32% to 36% of the vote, compared to 25% to 29% for the ruling left-wing Syriza.

The extreme right Golden Dawn and the Communist party are expected to get between 5% and 7% each.

16:00 Initial official projections in Germany show that Chancellor Angela Merkel's Christian Democrats (CDU) and its Bavarian sister party the CSU have come out ahead with 27.9% , but suffered a dip in support of 7.5 points. The losses were even heavier for the CDU's coalition partner the Social Democrats (SPD), who came in third with 15.6% support, down 11.7% from the last EU elections in 2014.

The Green party continued to reap the rewards of the coalition shedding votes and increasing concern about climate change. It came in second in Germany with 21.8%, an increase of 11.1%. The far-right AfD came in fourth with 10.5%, and the pro-business Free Democrats (FDP) and the Left party each got 5.5% of the vote. Other smaller parties accounted for the remaining 13%.

Germany is Europe's largest constituency with 96 seats in the 751-seat European Parliament.

15:39 Local media in Belgium have said that the far-right and nationalist parties are ahead in the Flemish-speaking north, while the Social Party is leading in the francophone south. In Flanders, the nationalist N-VA party has lost some votes to the far-right Vlaams Belang, but is still slightly in front. In Wallonia, the socialists were at 27.2%, followed by Prime Minister Charles Michel's center-right MR party at 20%.

The FPÖ was down only 2.2 points, to 17.5%. Chancellor Sebastian Kurz, who faces a confidence vote in parliament on Monday, saw his People's Party (ÖVP) gain 7.5% support placing it clearly in the lead.