Some 70 influential creators spoke out against Germany's ruling parties for climate inaction. The CDU has had to walk back its criticism of a YouTube star who slammed them for not tackling climate change. 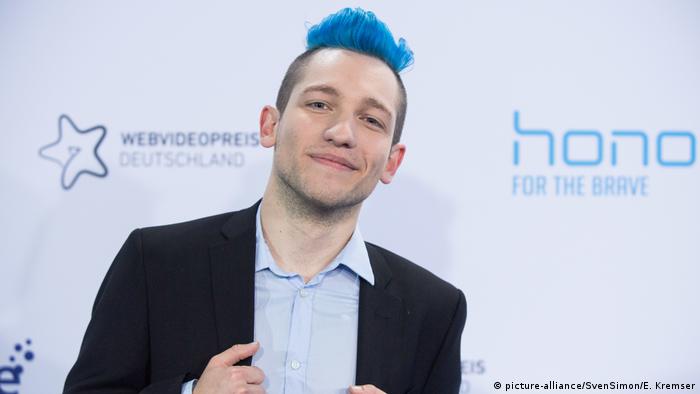 Dozens of Germany's most influential YouTubers released a video on Friday in support of Rezo (pictured above). His rant against Chancellor Angela Merkel's Christian Democrats (CDU) went viral this week after German politicians blasted him for speaking out.

In a video titled "The Destruction of the CDU," Rezo described his dissatisfaction with how Merkel's party and its coalition partner the Social Democrats (SPD) have handled the climate crisis. He further accused the government of enacting policies that protect the wealthiest Germans at the expense of the poor.

Once hailed as the "the climate chancellor," tackling rising global temperatures and the mass extinctions of species has fallen off Merkel's legislative agenda in recent years.

By Friday, the clip had 7.5 million views. Initially, the CDU promised a "response" video from the leader of its youth wing, Philip Amthor. The perception of Amthor as tepid — and his eventual no-show on YouTube — was roundly mocked on social media.

CDU members heavily criticized Rezo's statement, accusing him of oversimplifying and making false claims. The move backfired for the party, however, and they later took a more conciliatory tone and asked Rezo to join them in a dialogue.

YouTubers accuse government of attacking its own people

In the support video released on Friday, 70 prominent German YouTubers urged the young people of the country not to vote for the CDU or the SPD, reiterating the belief that the coalition is not doing anything to address climate change that will more heavily impact younger generations.

"The irreversible destruction of our planet is unfortunately not an abstract scenario but the predictable result of the current policies," they said in the video.

"Dear politician: of course you now have the possibility to discredit us again. You can accuse us of not having any plan to tackle what we're talking about. That we're lying…you have already used all these disrespectful techniques against us this year, against your own people."

The videos also called on young people to reject the far-right Alternative for Germany (AfD) when casting their ballots.

Later on Friday, the SPD released a response video featuring three of its prominent politicians, including the leader of the party's youth wing Kevin Kühnert.

"We think you're right to speak your mind...to go on onto the streets on Fridays," party General Secretary Lars Klingbeil said in the video, referring to the Fridays for Future climate protests. He added that the SPD disagrees with the CDU on climate policy, blaming Merkel's party for the lack of new environmental legislation.

On Sunday, Germany will vote in the EU elections. In recent years, both the CDU and SPD, who have long been the country's most prominent parties, slip in support as the Green party reaps the benefits.

A 26-year-old YouTuber is making headlines with his tirade against the Christian Democrats. Many disagree with the man's tone, but his video makes an important contribution to democracy, DW's Fabian von der Mark writes. (23.05.2019)