Environmentalism and climate protection are top priorities for voters going into the European elections. But Germany's establishment parties face roadblocks when convincing voters that they've turned over a green leaf. 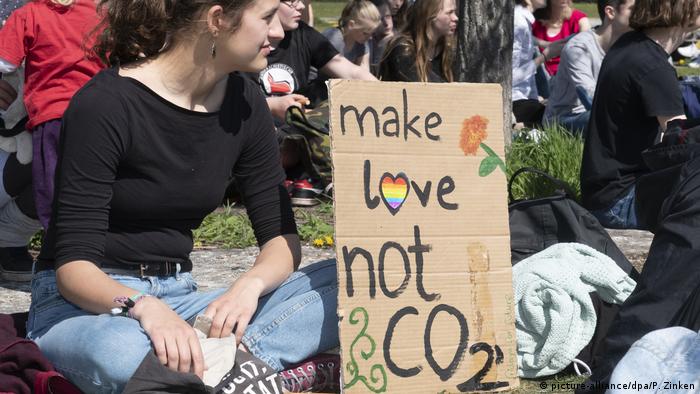 There's a sense of accomplishment among attendees at the latest Fridays for Future environmental protest in Berlin's small Invaliden Park, just ahead of the European elections.

It's not only because longtime German Chancellor Angela Merkel mentioned the movement by name when she announced recently that Germany would strive for net-zero carbon emissions by 2050. Climate change has also become the top concern among prospective voters ahead of the May 26 election, according to the latest polls, and every major German political party has rushed to shore up its climate and environmental policies to vie for last-minute votes.

"I believe that the political parties are finally realizing how important [climate change] is and how serious we are," said Leonel, a 20-year-old student protester.

But voters like Leonel and climate analysts are hesitant to put too much faith in campaign-trail rhetoric, following what they see as years of a botched transition to renewable energies and empty promises to reduce emissions.

There's good reason why climate activists have been quick to dub this year's European election the "climate election": 48% of Germans say environmental and climate protection is decisive in how they cast their ballots, a whopping 28% increase from the last European election in 2014.

Much of that is due to the pressure Swedish teenager Greta Thunberg's Fridays for Future school strikes have put on the international political establishment since 2018. But it's also from the raft of environmental scandals that have damaged Germany's international reputation as a global leader in climate protection.

In 2018, Germany sourced about 40% of its electricity from renewable sources, according to the research organization Fraunhofer Institute. But the nation is still heavily reliant on coal and severely lacks the necessary infrastructure to support its renewable buildup.

Meanwhile, emissions from Germany's transportation sector have barely budged since 1990, a fact underscored by the "dieselgate" emissions scandal perpetrated by German automakers. Other sectors, such as housing and agriculture, also require large-scale reform. As it currently stands, Germany will far miss the 2020 emissions targets it committed itself to when it signed the Paris Climate Agreement in 2015 and faces over a dozen environmental lawsuits from the European Union.

"We've made a lot of progress with renewables, but things get more difficult when you take a closer look at all the processes," Matthias Lang, an energy attorney with Bird & Bird law firm in Düsseldorf, told DW. "It's quite easy to pick low-hanging fruit. But it takes much longer and takes a lot more effort to do things correctly."

The socialist Left Party and the center-left Social Democrats (SPD) have also tied environmental reform into their traditional mantras. The Left Party is calling for public and cooperative ownership of industries that would act in the public interest to protect the environment, while the SPD, currently in government, supports ambitious emissions targets and Germany's departure from coal-fired energy, just as long workers are protected.

"The fact alone that the SPD now supports ridding itself of coal is huge — those have always been our people," Carsten Träger, the SPD's environmental spokesperson in Parliament, told DW.

Even the far-right Alternative for Germany (AfD), normally focused on immigration policy, is riding the trend. The party's environmental spokesperson in Parliament, Karsten Hilse, told DW that man's influence on climate change is dramatized, despite much scientific evidence to the contrary, and that the party advocates for the continued use of fossil fuels in Germany's energy mix — a position he insists is not a ploy to shore up right-wing support.

While it's notable that most political parties are finally having detailed conversations about how to curb emissions and protect the environment ahead of elections, indecision within Germany's most powerful political factions about the path forward is a worrisome trend, Olaf Tschimpke, president of conservation group Naturschutzbund Deutschland (NABU), told DW.

"Parts of the Union aren't convinced," he said, referring to Chancellor Merkel's conservative CDU and its Bavarian sister party, the Christian Social Union (CSU). Key pieces of legislation are set to be adopted by the end of the year which would setan end date for Germany's use of coal and make individual government sectors like transportation more responsible for the emissions they produce, but "if we don't keep the pressure high, then we won't see any movement," Tschimpke said.

Germany's political parties say that while they respect the efforts of young climate activists in curbing the election campaign, they won't be rushed into monumental decisions just to win votes.

"If all these various systems are to be restructured, we have to closely look at investment cycles, how things will be financed, as well as the social consequences and the impact on jobs," Marie-Luise Dött, the environmental spokesperson for the CDU in parliament, told DW. "That's not something that can happen overnight."

But for climate activist Leonel, one only has to look to traditional parties' sinking poll numbers to see that such excuses from the political establishment will no longer fly with voters: Both the CDU/CSU and the SPD are down almost 10% compared to the last European elections, while all other small parties, except the Greens, have stagnated, according to the latest polls.

"I'm just not convinced," he said of the government's environmental revamp, while holding a particularly apt sign: "The CDU and climate protection are like pizza with pineapple. They just don't go together."