The Swedish climate campaigner Greta Thunberg was welcomed by thousands of students in Berlin as she spoke at the Fridays for Future strike. The German government ignored her, and has not backed EU climate measures. 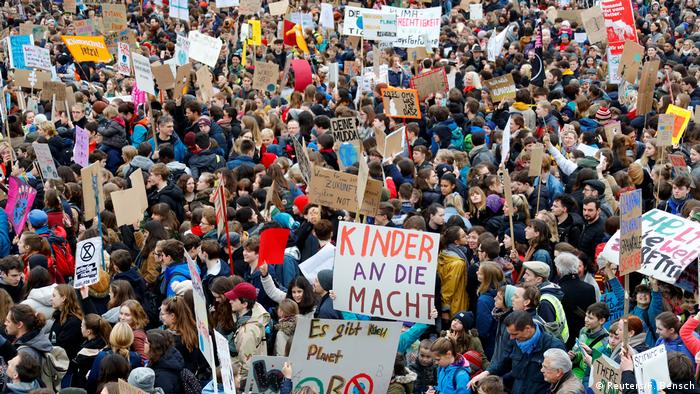 The environmental campaigner Greta Thunberg appeared before 25,000 people gathered at Berlin's Brandenburg Gate on Friday to protest ongoing indifference to the threat of climate disaster.

The 16-year-old was joined by thousands of Berlin students who were taking part in the Fridays for Future movement, which Thunberg started in her native Sweden last year. The school strikes have spread across the world, though not without triggering criticism from conservative German politicians who think children's school duties outweigh ecological concerns.

As they waited for Thunberg to appear on Friday, Berlin's students chanted defiantly: "We are here, we are loud, because you are stealing our future!"

There was a forest of homemade signs with similar messages. "We can cope with staying out of school," one banner read. "We can't cope with climate change." Many of the students were accompanied by teachers or parents carrying their own supporting messages on placards: "We're so proud of you!" and "The young people are our hope!"

Then, after a series of young campaigners from around Europe, spoke a few words, there was a rush of excitement in the crowd when Thunberg took to the stage in a buttoned-up anorak.

Thunberg spoke for less than two minutes, and despite her now-regular public appearances, her reluctance to be seen as a leader of a movement remained obvious. Nevertheless, her reserved manner belied the anger that was audible in her words.

"The older generations have failed in tackling the biggest crisis humanity has ever faced," Thunberg told the crowd. "When we say to them that we are worried about the future of our civilization, they just pat on our heads, saying: Everything will be fine, don't worry."

"But we should worry, we should panic, and by panic I don't mean running around screaming," Thunberg said. "By panic I mean stepping out of our comfort zones. Because when you are in a crisis you change your behavior. We want a future. Is that too much to ask for?"

Read more: 'We can make a difference'

Friday's weekly German government press conference was more or less an exercise in patting Thunberg and the Berlin children on the head. Angela Merkel's government has repeatedly been criticized for not doing enough to protect the climate, and the government's spokeswoman, Ulrike Demmer, confirmed that there were no plans for the chancellor or any of her ministers to meet Thunberg while she is in Germany (Merkel herself was in Italy on Friday). 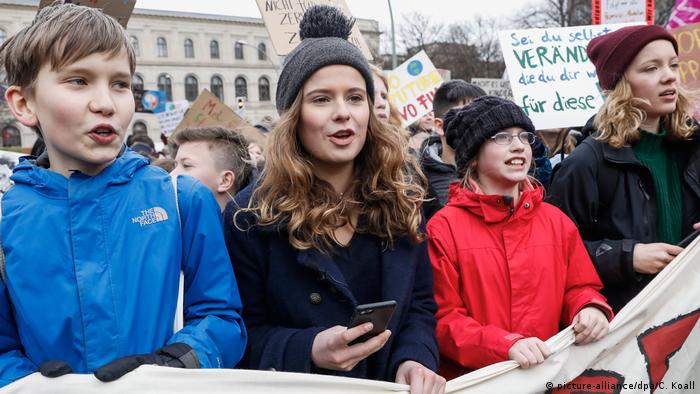 Asked to address the criticism, Demmer referred to Merkel's previous comments on the issue: "Children in Germany are protesting for climate protection. That is a really important issue. ... And the government fundamentally welcomes it when not only children, but all citizens, get engaged politically for climate protection. That is an important signal. Younger generations have good reasons to have especially high expectations of politicians."

Documents leaked ahead of an EU summit on climate change last week showed that the German government has not supported a European Commission-backed plan to decarbonize the bloc by 2050 — a key part of the strategy to limit global warming in accordance with the 2015 Paris climate agreement. France, the Netherlands, Luxembourg, Spain, Portugal, Finland, Sweden and Denmark all support the plan.

"That wasn't the final discussion of this issue," said Stephan Haufe, spokesman for the Environment Ministry. "There will be more discussions."

"Our government has always made clear that Germany will make its contribution to climate protection," Demmer said.

Out on the streets, while a noisy band called Funketeers for Future played on the stage, 14-year-old Raphael didn't think much of this response. "I think we've been waiting for far too long for politicians to do something about it," he told DW. "The media just need to report what we're saying and what the scientists are telling them."

One young speaker on stage said there had been more than enough time to act, given that the facts about the impending climate disaster are much older than most of the people at the demo. "We're basically going on the streets because of facts that were recognized 40 years ago, and agreements that were made 30 years ago," she said.

A global school strike against climate change inaction is underway. Protests have taken place or will do so in more than 100 countries, all following the example of one young Swedish climate activist. (15.03.2019)

German Chancellor Merkel has praised protests by school pupils urging more action on climate change. But she said they would have to be patient about Germany's phaseout of coal-fired energy. (02.03.2019)