A global school strike against climate change inaction is underway. Protests have taken place or will do so in more than 100 countries, all following the example of one young Swedish climate activist.

Schoolchildren across the world are joining the global Fridays for Future protests, demanding global leaders take action on climate change. The movement, started by 16-year-old Swede Greta Thunberg, is expected to see children, their parents and their supporters take to the streets in 1,500 cities in more than 100 countries.

The eastern Australian city of Melbourne saw one of the largest protests in the country.

In New Zealand, one of the other countries where the protests kicked off, strike organizers said they were pleased after a meeting with Prime Minister Jacinda Ardern and Climate Change Minister James Shaw, saying they believed their government would take positive steps.

"But this is a crisis and we need to start treating it as such," they said in a statement.

A march in Christchurch, New Zealand was cut short by a lockdown after shootings at two local mosques. Participating students were confirmed to be safe, Mayor Lianne Dalziel told the New Zealand site Newshub.

DW's Kate Brady was at the protest in the German capital, Berlin, and tweeted about one banner that cited actor Channing Tatum as an example of "hotness", but warned rather of the kind of heat caused by climate warming.

She said thousands were expected at the Berlin rally.

The protesters in Berlin, who included, for the first time, parents and scientists, planned to make a stop in front of Chancellor Angela Merkel's office. Several other German cities have also seen similar rallies. 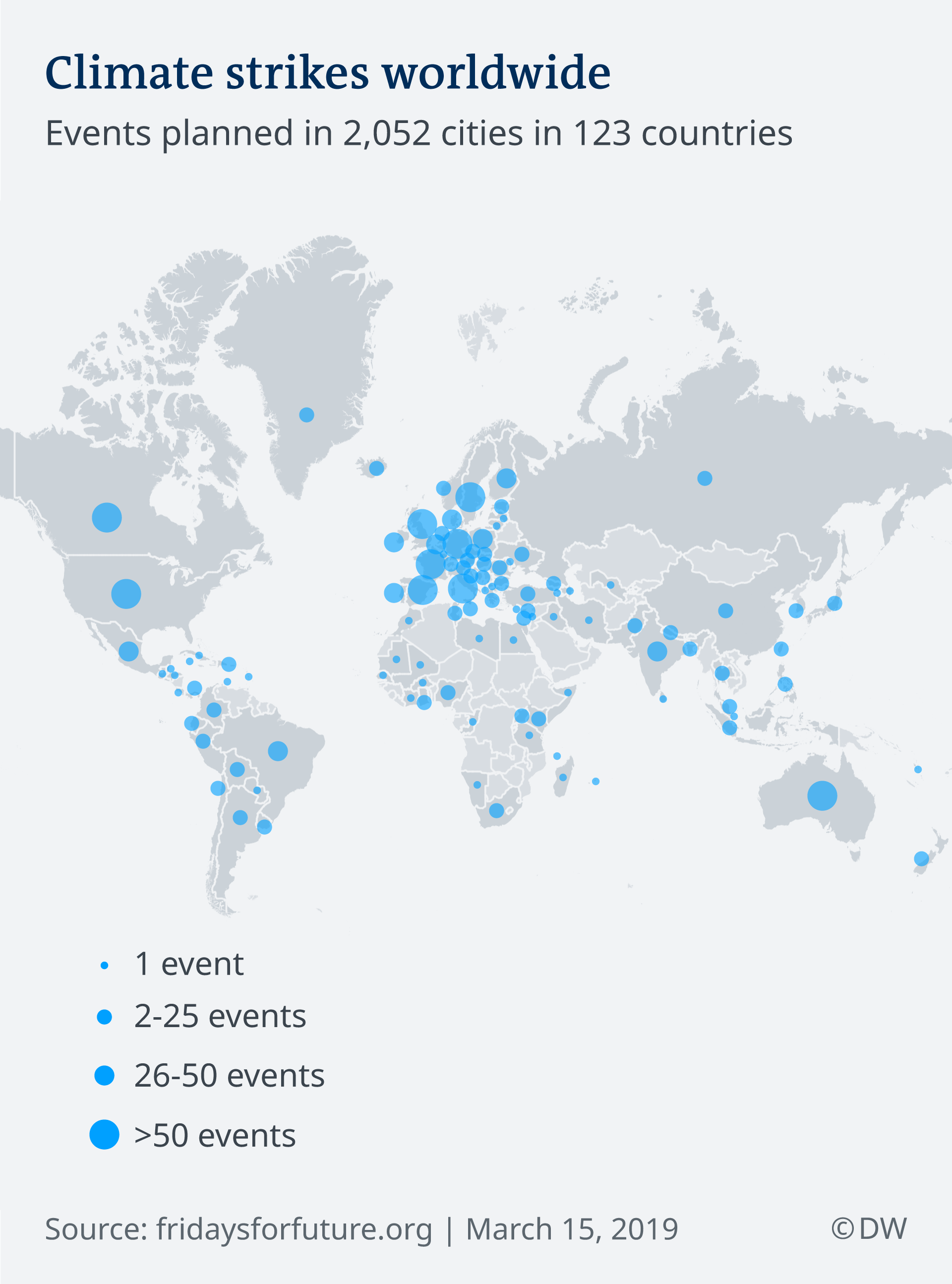 Critics: Students should protest 'after school or on weekends'

Children say they are walking out of school to bring greater attention to the impending crises that will have more of an impact on their generation than on those making current policy.

Ardern's engagement has been unusual, as many politicians in countries such as the United Kingdom and the United States have chastized the children for missing a day of school.

"For action on issues that they think is important, they should do that after school or on weekends," Australia's Education Minister Dan Tehan told reporters ahead of protests in Melbourne.

In Germany, the leader of the pro-business Free Democrats (FDP), Christian Lindner, went so far as to discourage the student's political engagement. He was then mocked on social media for writing on Twitter that "politics is for professionals."

Germany's Chancellor Merkel, however, has backed the protests, calling it a "very good initiative."

The Fridays for Future movement has become a global phenomenon since activist Greta Thunberg staged the first demonstration in front of the Swedish parliament building last August.

She came to worldwide attention when she was invited to address the UN Climate Conference in December. She has been nominated by three Norwegian lawmakers for the Nobel Peace Prize.

The protesters are all calling on the world's governments to work to keep the Earth's global temperature well below 2 degrees Celsius (3.6 degrees Fahrenheit) by the end of the century, as agreed by many leaders in Paris in 2015. At present, the world is on track for an increase of 4 degrees Celsius, which scientists say could have far-reaching and sometimes catastrophic effects on life on the planet.

CO2 reduction as a family experiment

CO2 reduction as a family experiment

The chancellor and the activist

The strikes are gaining momentum with 2,000 demonstrations across 120 countries on Friday, from the South Pacific to the edge of the Arctic Circle. This is what a worldwide storm looks like. (15.03.2019)