Worried teenagers are taking to the streets to protest against climate change. They are more interested in environmental politics than ever before. Will protest also turn into more climate action? It's a cold January morning in front of Cologne Central Station. As people stream out of the main entrance, it's noticeable that there are quite a few teenagers. Strange, considering it's a school day.

Most of them have come in small groups, while others hang out in the main square outside of the station with friends. Many have brought homemade cardboard signs with them bearing painted-on slogans such as "We are here, we are loud, because you are stealing the future from us," and "We do not learn for a ruined future."

At the same time, a separate climate protest is taking place in the nearby city of Bonn, where young people marched up to the UN Campus to demand that their voices be heard.

This has become a common scene in many large cities — students eschewing lessons at school to protest for climate protection. They were inspired by Swedish student Greta Thunberg who doesn't go to school on Fridays, instead opting to protest against climate inaction in front of the parliament in Stockholm — with her textbooks of course. She's even started a new movement called "Fridays For Future."

The message these young people hope to send to the older generation is increasingly clear: By not doing enough to help the environment, you are gambling away our future.

Lena and Leonie, both 15-years-old, are from Cologne's surrounding region. They are far from veteran climate activists — in fact, this is their very first demonstration. But this is an important topic that appeals to everyone, "even if you are not very well informed," they say.

And they're in good company. Seventeen-year-old Benjamin came here to "send a message," while 16-year-old Hannah wants to "show that we have an opinion." 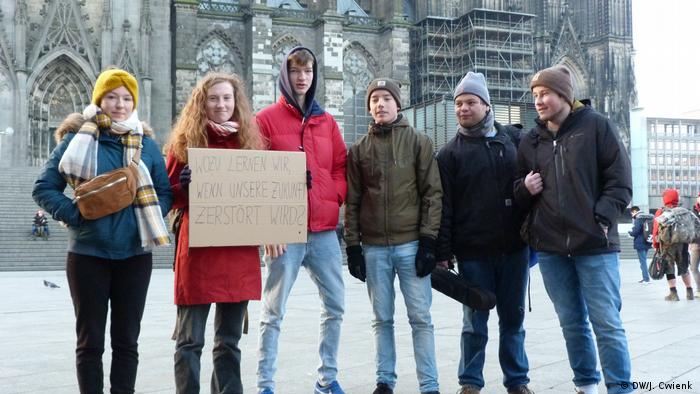 Students protest in the main square next to the Cologne Cathedral. Benjamin (right) hopes the protest will send a message

In fact, teenagers in Germany are more interested in politics than they have ever been before. The topic of environmental protection interests them the most, says youth researcher Klaus Hurrelmann from the Hertie School of Governance, who has spent years studying the changing values, attitudes and habits of Germany's youth.

The interests of the younger generation extend to all areas that have to do with the environment, explains Hurrelmann. Whether its plastic pollution in our oceans, the death of insects due to the rise of industrial agriculture or just global warming. "These people intuitively feel that these are our natural, existential foundations and we do not want to see them in danger," Hurrelmann told DW.

A shift in values?

Hurrelmann thinks a shift in attitudes is taking place. "Today, those under 20 are more interested in politics than those who are over 20," he explained. "And we also expect the interest of the young people included in our upcoming surveys will have increased again."

These figures reflect the growing environmental awareness of the young generation. NGO Friends of the Earth Germany (BUND) reportedly registered the highest membership growth among people under the age of 27. Approximately 12,000 young people are active members of the World Wildlife Fund (WWF) nationwide, and many more get involved online. So what happened to the stereotype of the carefree, careless teenager? 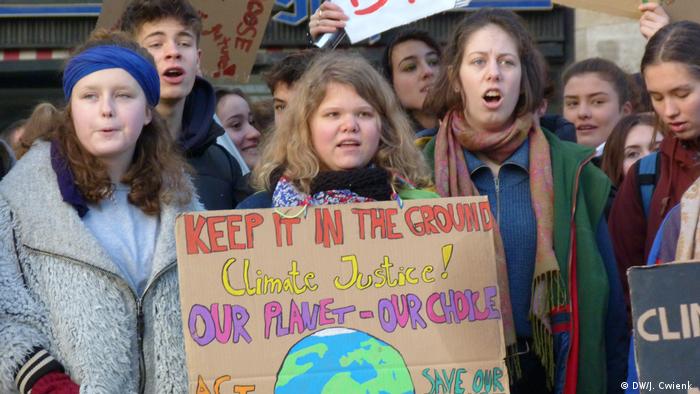 No time left for patience

Jana says she has been interested in environmental issues since the age of 12 when she became a member of the WWF. "I can't talk about being carefree when I look ahead to the future," the 16-year-old told DW. "The extreme summer droughts, heat spells around the world — it's all just a prelude to what is coming and that scares me."

These young people are determined to push for a total coal phase-out. "We should have acted much sooner," said Lena. "As more time passes, it becomes much more difficult. We don't have very much time left."

Parents with a guilty conscience

So who failed? The politicians? The parents? The grandparents? And who needs to take action? The answers to these questions are always the same: All of us. "Of course, there are some people who can do much more than others," said Hannah. "But you can't put the blame on individuals, it's a group effort," Lara pointed out.

Most young people at these protests do not harbor any anger toward their parents. Instead, they look at what they can do at home to help the environment and their families are often supportive of their ideas. Some teenagers' parents now also try to eat less meat, or leave their car at home when they can bike or take public transport instead.

So are we starting to see a generation of guilty parents emerge? It would seem so. "Our generation has screwed up and the children are now the ones who have to pay the price," said Andrew Murphy, who is attending a climate action demonstration in Bonn with three of his four children. 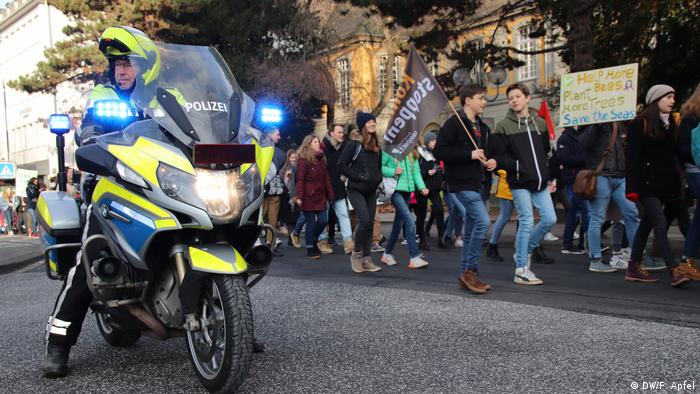 Young people marched through the streets of Bonn during a Fridays for Future event, demanding climate action

A tough life ahead

But is today's young generation really so much better than their elders? Yes and no, said Hurrelmann. "Although the protection of the environment and the preservation of their future livelihoods take a very high priority, it's often difficult for young people to consistently implement this in their everyday lives," he explained.

Most people can relate to this. Sometimes it's just easier to take the car to school instead of riding a bike. And avoiding plastic packaging altogether is a challenge in today's world.

But young people are ready to defend themselves against those who claim they should be doing more. "[They] would argue that politicians dictate the rules which help them achieve their environmental goals, and they have a much higher willingness to respect political decisions, which strengthen environmental protection compared to the older generation." 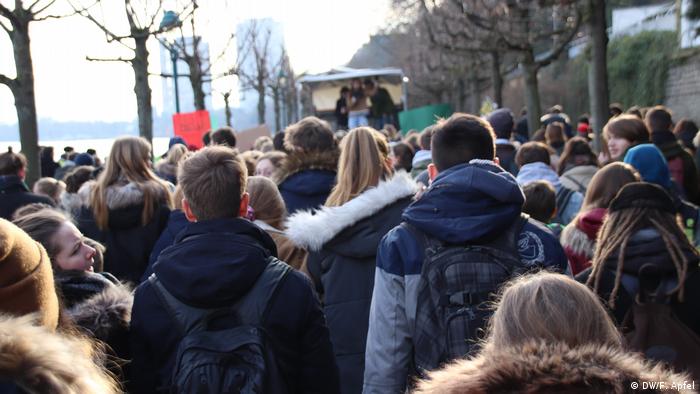 So these protests against environmental destruction are essentially a call to start implementing bans — at least if you want to put a negative spin on it. Or at least giving the consumer some relief from bearing complete responsibility for what happens to the planet.

For a long time, everyone has only been responsible for themselves, said 16-year-old Jana. But everyone can make changes, she added.

"Taking public transport instead of your car, don't shop for cheap fashion and eat less meat," she explained. The most important thing though is to spread the word and encourage others to take action. "There can only be real change when many people get involved."

Franziska Apfel contributed to this article.