'We can make a difference': Voices of school climate strikers from around the world

Thousands of kids have walked out of class for a global day of climate action. DW spoke to young people from around the world taking part in the Fridays for Future marches about their hopes and fears. 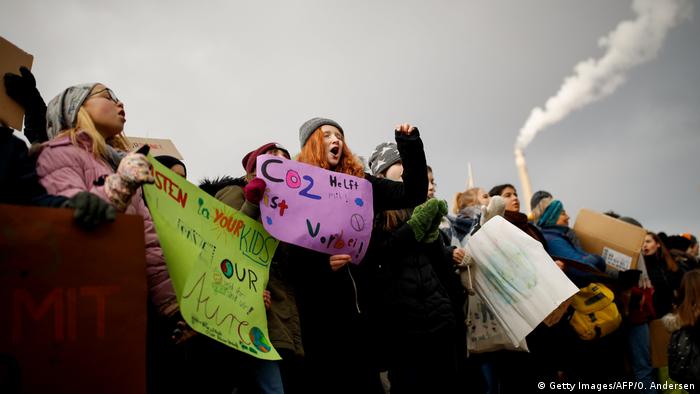 Ditching school is a symbol of dedication: We're sacrificing our education so that we can have a future. The atmosphere at the strikes is insane. Sometimes when you raise your voice you feel like a nail sticking out that people want to squash back down. But at the strikes it feels like we are all rising together. Our demands are: Stop the building of Adami (a new coal mine in Queensland), no new coal or gas, and 100 percent renewable by 2030.

Our weather is already getting increasingly unpredictable and intense. Last year, just after a drought, there was severe flooding in Queensland and thousands of people had to be evacuated. In other parts of Queensland, rainforests that had never seen fire were suddenly burning. I was in north-western New South Wales in spring last year. There are usually thousands of flowers there at that time — it's exquisite. Instead there was just nothing, it was all dead. There were kangaroo skeletons everywhere. 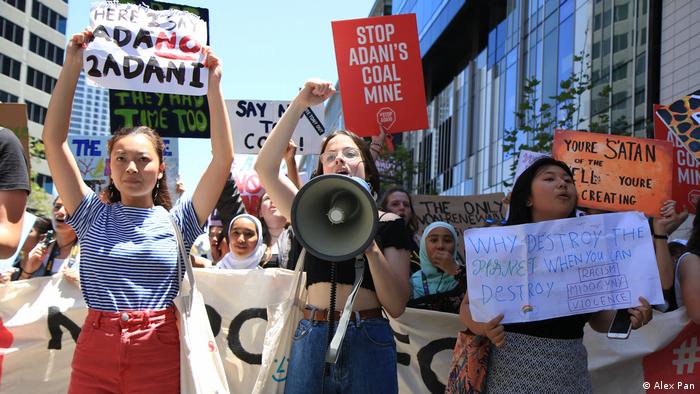 Stopping the Adani coal mine is a key demand for Daisy, center, striking in Sydney, Australia

Our government's response has so far been abysmal. But pressure on politicians is growing. We need to keep moving after the global strike. In the lead up to the Australian federal election in May, we will continue to fight for climate action. This is a climate-oriented election: It could be the one that decides everything. The UN warned last year that we only have 12 years to take drastic action to prevent climate catastrophe — that's only four more terms of government. 'Development should not be at the expense of our future' - Nakabuye, striking in Kampala, Uganda

We can make a difference  — Nakabuye, 20, Uganda

One of my professors told me climate change is God's plan and was meant to happen. I've tried to inform some teachers but many think they have more information just because they're older. I tell them climate change is real, and it is our responsibility to do something because we can make a difference.

Desertification is already happening in Uganda so if we don't act now I don't think there will be life in decades to come. Sometimes you wake up and some parts of the rainforest have just disappeared. Then there is the planned oil pipeline in Hoima district. And plastic pollution is absolutely everywhere. We need development but not at the expense of our future. We have a chance to switch to renewable energy. Active participation and inclusion in issues affecting our lives is crucial, especially when adults are prioritizing profit. I'm passionate about making change: I can't stop thinking about it. If it's not us, then who else will do it? 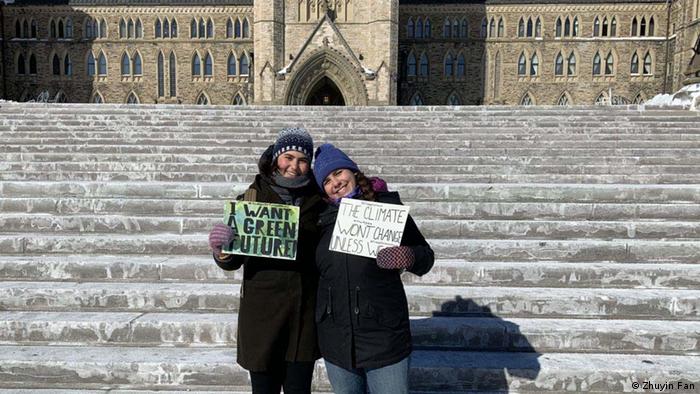 'We are heading towards a climate apocalypse' - sisters Mia and Katie are striking in Ottawa, Canada

Katie: We're not often represented in big decisions that concern the environment or climate change. So when young people rise up and prove we've been watching the political leaders and we call them out, I think it's really shocking to some people. Sometimes adults don't realize the severity of it the way kids do. We have no time: We don't have the luxury of waiting anymore. 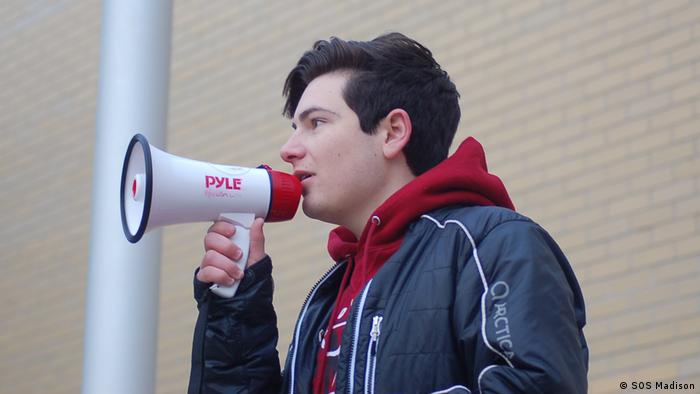 Tackling misinformation on climate change is key - Max striking in Wisconsin, US

Our environment shouldn't be a political war — Max, 17, United States

I learn in school that climate change is blatantly real and then I go on the internet and see Trump tweeting something that would get you mocked in class. There's a huge contradiction between what we're being taught in schools and what's actually happening. That's part of the reason we are motivated to actually strike.

I think that social media has played a huge hand in allowing us to see that we have a voice, and that movements like this can inspire change not just in the general public but among our politicians — because that's who really needs to be inspired at this point. It's super frustrating seeing adults participating in petty, unproductive arguments on climate change.

Capping carbon emissions, a Green New Deal, and not investing in fossil fuel infrastructure projects are some of our key demands. Our environment shouldn't be a political war. Whether you're Republican or Democrat you should care about the future of your children and of this planet. 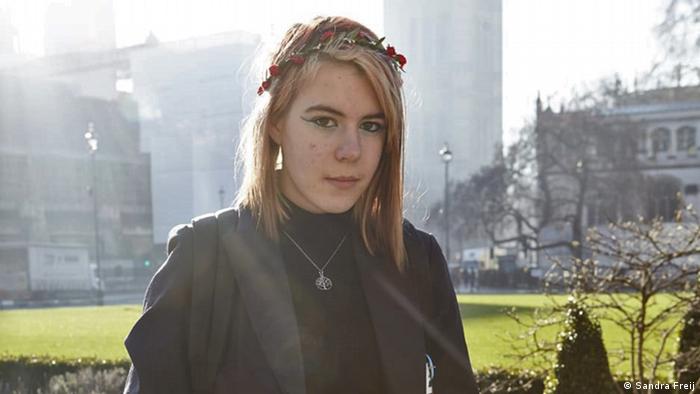 'We always use words such as 'crisis' - because that's what it is' - Anna, who helped set up the UK strikes

Students are now having to educate themselves — Anna, 18, United Kingdom

The school strikes have done something that has never really happened before: They've united students across the globe in a single movement.

We always use words such as "crisis" and "catastrophe" because that's what it is. The problem is that the media and the education system don't. I'm a geography student and "climate crisis" is not in my textbooks at all. Students are now having to educate themselves. It's almost like young people have been kept ignorant by the media and education system. I think as young people become more aware it shocks them. I have met loads who feel their mental health has really suffered.

It's important to remember that it's not just about our future. It's about the injustice and suffering already occurring in countries such as the islands in the Pacific. We can try to ensure that the government accept its responsibility and try and mitigate the crisis. We can't stop it but we can possibly reduce its effects at least. 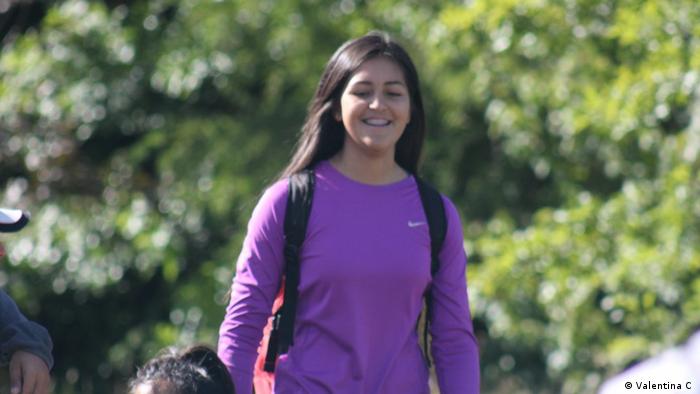 'We need to ensure a future for the next generation of all species and ethnic groups' - Valentina, striking in Chile

Without a doubt the school strikes movement can achieve great changes. We consider it vital for us as students to demand a secure future — one in which we can live, particularly since the measures that our government are taking to help the planet are unfortunately not sufficient. We're not talking about a future crisis — the crisis is already here: starvation, drought, deforestation, and the extinction of flora and fauna.

We don't see this in the news, we only see the political and economic interests represented. The state apparatus must evolve to deal with these social factors. In terms of environmental and social policies, Chile is decades behind in comparison with Europe or Canada. That is why it is our duty in this time of crisis to inform the community about how their actions affect the planet. We are looking to have a future, not only for us, but also for the next generation of all species and ethnic groups. 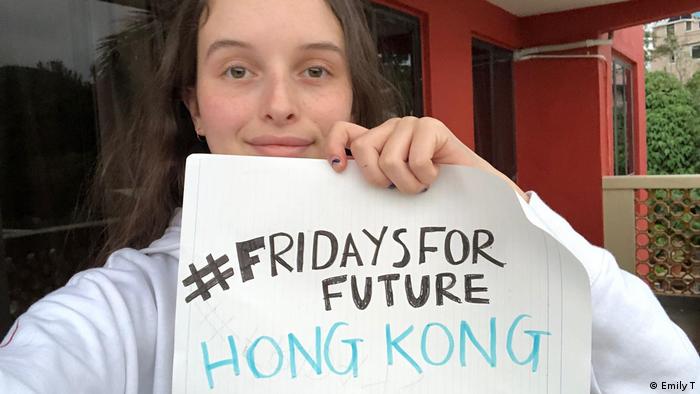 Climate change is right in front of our faces — Emily, 17, Hong Kong

We've been following what Greta Thunberg was doing in Sweden and thought Hong Kong was the perfect place to do a strike because there are so many signs of climate change. The harbor sea level is rising and it keeps getting hotter. There are super strong typhoons that get worse every year — in September we had the strongest one ever recorded. The concerning thing is it is right in front of our faces and no-one is doing anything about it.

In Hong Kong we use about one percent renewable energy at the moment and the goal is only to move it up a few more percent. We are really behind other countries and it is disappointing. Hong Kong is covered in buildings and most of them could have solar panels on them. The city has so much potential for renewable energy. That's one of our main goals that we want to push the government towards.

These interviews have been edited for clarity and length.

The United States, the European Union and India are all slapping tariffs on Chinese solar panels, accusing Beijing of dumping. Does this trade war risk killing the nascent solar power industry? (26.01.2018)

A new report has warned climate change could bring widespread hardship to the United States if nothing is done to stop it. President Donald Trump has downplayed the threat amid freezing temperatures this week. (24.11.2018)

NASA scientist Peter Kalmus says small changes can make a big difference when it comes to protecting the environment. He's even written a book to inspire others. (31.01.2019)

The latest figures put pollution on par with smoking in terms of global deaths. In comparison, COVID-19 killed about 6.7 million people globally since the pandemic began.