Is this Manfred Weber's moment? The member of Bavaria's Christian Social Union (CSU) is the lead candidate for the European People's Party — the EU's blocwide center-right alliance — to be the next president of the European Commission. The EPP alliance had fared best in the last elections for the European Parliament, in 2014.

To put it another way, Weber is German Chancellor Angela Merkel's current nomination to replace Jean-Claude Juncker as the European Union's arguably most powerful politician.

Weber is not even a household name in Germany, at least not yet — probably owing to his years working in the European Parliament rather than in domestic politics.

Several conservatives had preferred former Finnish Prime Minister Alexander Stubb, who has a higher profile and a fluent command of English, French and German. Weber, by contrast, speaks only basic French and boasts strong but imperfect English.

That puts him behind the curve in the multilingual corridors of Brussels. Traditionally, heads of the commission, a sprawling bureaucracy that employs more than 32,000 civil servants, speak English and French in addition to their mother tongues. 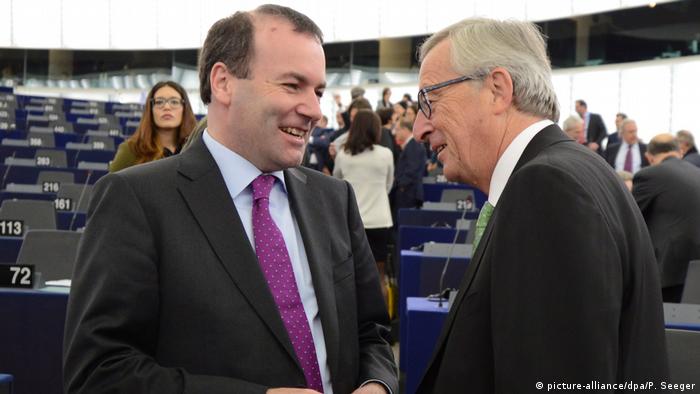 Weber and Juncker, the man he hopes to succeed, celebrate the EPP's victory in 2014

Weber, whose CSU works in close alliance with Merkel's Christian Democrats, took over the chairmanship of the EPP group in the European Parliament in 2014. He earned plaudits within the EPP for walking a fine line during a particularly tricky time for German conservatives in the European Union, holding the broad center-right alliance together.

The 46-year-old Catholic was sufficiently pro-EU for Merkel's taste. But Weber also managed to keep enough distance on key issues — not least migration — to convince CSU party members to propose him as a top candidate. He failed in this endeavor in 2014.

Until Monday, Weber had sought to keep Hungary's ruling nationalist Fidesz party in the EPP fold and in his corner. However, recent comments that he did not want to rely on Fidesz politicians' votes to become commission president prompted Hungarian Prime Minister Viktor Orban to withdraw his party's support.

Fidesz remains in the EPP, but speculation continues about whether the party will break away ahead of the elections later in May. Merkel's nominal successor at home, Annegret Kramp-Karrenbauer, said on Tuesday that she expected Fidesz to leave the EPP.

Weber remains relatively anonymous outside the EU bubble and his constituency in Bavaria.

There are several variables. It is uncertain, for example, how the populist coalition government in Italy will react to a German candidate. After all, both the anti-establishment 5-Star Movement and the far-right League blame Germany and Merkel for all manner of EU woes.

After graduating from university in 1996, Weber founded a consultancy for environmental technology and remains the managing director, according to his official website.

Weber led the CSU's youth wing before serving in Bavaria's state legislature in 2002. In 2004, he was sent to Strasbourg to begin his career in the European Parliament. At first, Weber had seemed a little alienated by the legislature's bureaucracy, and he continued to run his company on the side.

In Germany, Weber made a name for himself in the CSU with his clear positions on domestic issues, and he was eventually appointed deputy to party leader Horst Seehofer. Weber has, however, never held a government office or led a ministry within Germany at the federal or state level.

Weber's critics like to contrast the lawmaker's career with those of the recent presidents of the Commission: Jean-Claude Juncker, Jose Manuel Barroso and Romano Prodi were, respectively, the prime ministers of Luxembourg, Portugal and Italy, and, therefore, had experience with the European Council and the heads of government of the member states.

In the run-up to the elections for the European Parliament, journalists have reported that neither Merkel nor French President Emmanuel Macron is particularly a fan of the top-candidate system of choosing a president for the commission. That came about in 2014, in order to preempt critics who say the head of the European Union's executive arm is unelected.

That means that Weber's "nomination" secured does not necessarily imply the watertight backing of closely allied politicians in the way that candidates put forth by parties elsewhere — say, the Republicans or Democrats in the United States — might have.

The EPP is unlikely to win enough support to continue its centrist coalition with its nominal rival, the Progressive Alliance of Socialists and Democrats bloc. Even if it did manage this, Germany's Social Democrats in the European Parliament have already said that they would not support Weber to be commission president.

Weber would also require approval from the European Council, the leaders of the 27 — 28 with Britain — EU member states. However the EPP performs in the elections for the European Parliament later in May, Weber's campaign will be just beginning.