German MEP Manfred Weber told DW that he is "surprised" at the "chaotic situation" in London, as PM Theresa May attempts to form a government. French President Emmanuel Macron told May the door is open for a UK return. 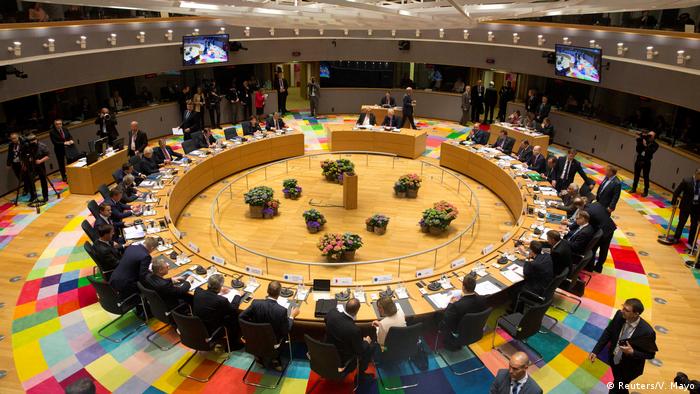 Manfred Weber, the head of the European Parliament's largest group and a key ally of German Chancellor Angela Merkel, on Tuesday said that extending the deadline for Brexit talks would be extremely difficult.

"The clock is ticking," Weber told DW. "As Europeans, we are simply surprised that we have now in London such a chaotic situation."

Brussels was ready and waiting to begin negotiations, he said, but no one knew what to expect in talks with a future British government. "We need now a clear indication from London what they want to achieve," Weber told DW.

Read: Hard or soft - how will the UK take its Brexit?

He expressed frustration with the lack of direction from London concerning the negotiations, saying that British Prime Minister Theresa May and Brexit minister David Davis have been clear about what they don't like, but less clear on how they want the talks to play out.

"We have no indication what they like, what they want to achieve in the negotiations," Weber said, adding that such a stance "is a very risky thing because at the end, a hard Brexit will be a disaster for London."

No extension of Brexit talk deadline

The German MEP said that he opposed extending the two-year deadline for negotiations set in motion in March when the UK triggered Article 50 of the Lisbon Treaty.

He said it was unthinkable and "not realistic" to consider the prospect of the UK voting for MEPs during the 2019 European Parliament election - due just days after the UK's current deadline to exit.

"Of course the door is always open as long as the negotiations on Brexit have not finished," Macron said in a press conference, adding that the British people had taken the sovereign decision to leave the 28-member bloc in their referendum a year ago. "Once it [the Brexit process] has started we need to be collectively clear that it's more difficult to reverse course," he said at the Elysee palace. 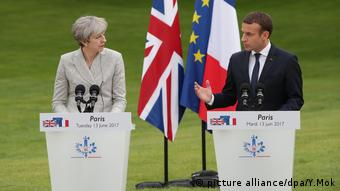 May made progress on Tuesday in securing a coalition deal with the hardline Northern Irish Democratic Unionist Party (DUP).

She met with DUP leader Arlene Foster, whose party has 10 parliamentary seats needed for a Conservative minority government. The BBC reported that a deal is expected to be signed on Wednesday.

"Discussions are going well with the government," Foster said. "We hope soon to be able to bring this work to a successful conclusion."

The coalition deal has also raised questions about May's plans for a so-called "hard Brexit," broadly interpreted to mean withdrawing the European single market and its open borders. While the DUP's stance is relatively euroskeptic - certainly by Northern Irish standards - the party has placed great importance on retaining a "frictionless border" with the Republic of Ireland, an EU member, after Brexit.

Politicians from Northern Ireland's nationalist party Sinn Fein - the direct Catholic and republican rival to the Protestant and unionist DUP - have been particularly critical of any planned deal between the Tories and the DUP.

But even former Conservative Prime Minister John Major, who helped lay the foundations of the 1997 Good Friday Agreement in Northern Ireland, said in an interview that he was "dubious" about his party doing a deal with the DUP.

"A fundamental part of that peace process is that the UK government needs to be impartial between all the competing interests in Northern Ireland. …. That was always the intention right from the start of the negotiations," Major told BBC Radio 4. "The danger is, that however much any government tries, they will not be seen to be impartial if they are locked into a parliamentary deal at Westminster with one of the Northern Ireland parties."

May called for the early national election hoping to strengthen her party's majority going into negotiations on the UK's exit from the EU. Instead, national politics were thrown into disarray after the opposition Labour Party made unexpected gains in the vote, coming in a strong second.

Theresa May ministers in 'secret Brexit talks' with Labour

As Theresa May attempts to cobble together a majority, her vision of a hard Brexit seems to be slipping away. Some of her most senior ministers have reportedly been meeting with the Labour party to secure a soft Brexit. (13.06.2017)