British government in crisis as Brexit talks loom | Europe | News and current affairs from around the continent | DW | 12.06.2017

Theresa May's poor election showing has put Britain in a tough spot. While the prime minister is attempting to form a government, EU leaders have said they do not want to extend the deadline for Brexit talks. 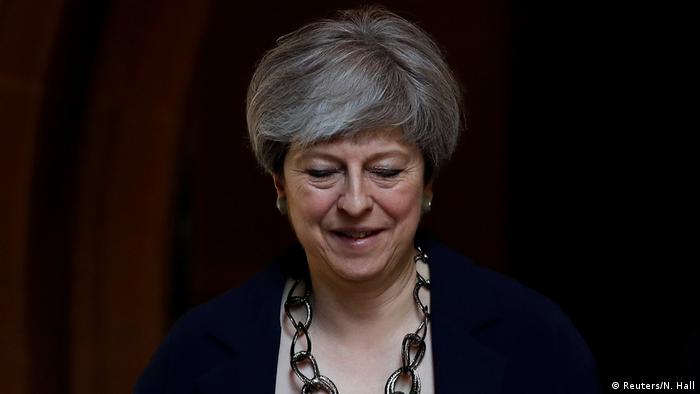 When Prime Minister Theresa May triggered Article 50 of the Lisbon Treaty in March, thus beginning the formal process of Britain's exit from the European Union, she did not realize she would soon be fighting for her political life.

Article 50, which was not designed to make things easy for the country exiting the EU, sets a strict two-year timeline for talks, giving Britain until March 2019 to conclude discussions. EU leaders have indicated they do not want to extend this deadline: "We don't know when Brexit talks start. We know when they must end," Donald Tusk, president of the European Council, tweeted on Friday.

Talks had been expected to begin on June 19. But after Britain's shock election result on June 9, in which the Conservatives lost their parliamentary majority, that looks increasingly unrealistic.

"There is absolutely no doubt that the UK government enters these negotiations tremendously diminished, and the absence of a clear mandate risks further destabilizing what was already likely to be a difficult, complex process," Sophie Gaston, head of international projects at the think tank Demos, told DW. "Triggering Article 50 before an election was grossly arrogant and has left the country in a highly vulnerable position. We can delay the start date for talks as long as we wish, but the clock will not stop ticking on their end date."

May is seeking an arrangement with the Northern Irish Democratic Unionist Party (DUP) that would shore up the Conservatives as a minority government, but that still hangs in the balance. Downing Street is presently unable to confirm whether it will be able to produce a Queens Speech - in which the government sets out a legislative program - on Monday. 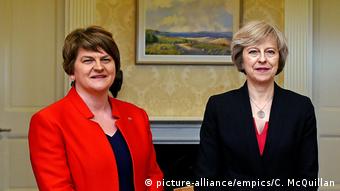 May is seeking a minority government with the DUP

While negotiations over a deal with the DUP continue, May has completed a cabinet reshuffle, bringing back her adversary - and leading Brexiteer - Michael Gove to the frontbench, in the position of environment secretary. Many other key roles, such as Amber Rudd as home secretary and Phillip Hammond as chancellor of the exchequer, remained unchanged.

"The reshuffle is about creating a sense of continuity - minimal upheaval and bringing in a few other 'safe pairs of hands' to the Cabinet," said Gaston. "The Conservative Party is understandably nervous about fighting another election, so it needs to minimize disruption and avoid polarizing figures."

At the moment, senior members of the cabinet and the influential 1922 Committee of backbenchers are all desperate to avoid an immediate election and to get started on Brexit talks. But operating as a minority government has pragmatic ramifications. "There's a hugely important practical impact to this diminishment," said BBC journalist Mark Mardell. "Any minority government is hostage to the whim of MPs."

It is so far unclear what effect the Conservatives' reduced parliamentary position will have on Brexit negotiations. Some commentators have interpreted the election result as a rejection of May's approach so far - but it is a mixed picture.

"Parliaments without majorities are more prone to politicking and point-scoring than most," Stephen Martin, director general of the Institute of Directors, an organization representing business leaders, told DW. "If we do indeed see a minority government, both sides of the aisle must swallow their pride and work on a cross-party basis on the most important issues. The last thing business needs is a parliament in paralysis, and the consequences for British businesses and for the UK as an investment destination would be severe."

Despite the enormity of the constitutional challenge facing Britain, cross-party collaboration does not seem to be on the agenda, with partisan animosity soaring. "It would be hugely helpful for the country as a whole to have the best minds working together - but the insecurities and opportunities this chaotic outcome presents to both the Conservatives and Labour means there will strong voices from both sides to favor partisanship," said Gaston.

While May struggles to stay in office, questions have been raised about her ability to carry Britain through this period. "The damage that will be caused by Brexit will be more directly caused by May's sequence of bad decisions than by the actual referendum result," lawyer and legal commentator David Allen Green told DW. "The UK is now three months into the Article 50 process and it seems we are in a worse position because of May's frolic of a general election than when the UK made the notification."