European Council President Donald Tusk said that the EU should not be hasty just because of Brexit fatigue. French and German leaders have signaled that they would be unwilling to offer another deadline extension. 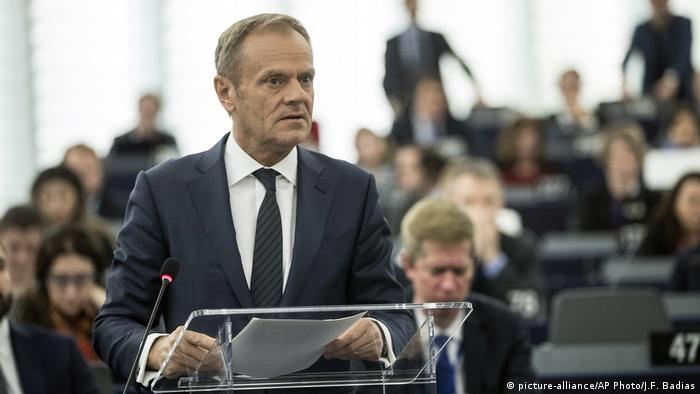 European Council President Donald Tusk said on Tuesday that no one should give up on the "dream" that the UK might reverse course on Brexit, and urged EU politicians not to push for a quick exit out of mere exhaustion.

"At this rather difficult moment in our history, we need dreamers and dreams. We cannot give in to fatalism. At least I will not stop dreaming about a better and united Europe," Tusk said while giving an account of last week's EU summit on Brexit.

Tusk did not mention any leaders by name, but French President Emmanuel Macron made it clear at the summit that he preferred giving Britain only a few weeks to conclude negotiations, as opposed to the six months it was eventually granted.

'You cannot drag out Brexit for a decade'

German Foreign Minister Heiko Maas stressed on Tuesday that the UK should not expect to be granted another extension. He said that any such request would be read as a desire to remain in the EU.

"They will have to decide what they want by October," Maas told the Financial Times. "You cannot drag out Brexit for a decade."

Alluding to the absurdity of Britain's current situation as it prepares to field candidates for the upcoming EU vote, Maas said: "Just think about it: You say you want to leave Europe and then you hold a European Parliament election."

European Commission President Jean-Claude Juncker, however, took a similar tack to Tusk on Tuesday, saying that it was up to the UK to decide when it left Europe, though he added he was not assuming that the British government would change course.

Juncker also suggested that ahead of the October 31 deadline, the other 27 EU countries maintained the right to meet without inviting the UK.