Donald Tusk has told EU leaders that he did not think the UK could come to an agreement by June 30. He also called for an end to short extensions, last-minute summits, and cliff edges that create more uncertainty. 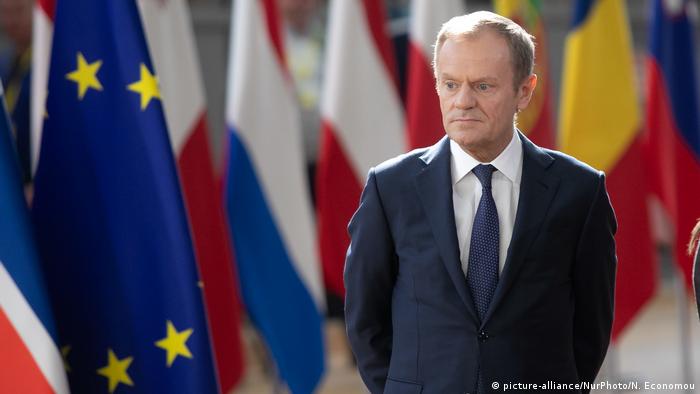 In a letter to EU leaders on Tuesday, European Council President Donald Tusk pushed for a longer extension for Brexit than the June 30 deadline the UK government has asked for. Tusk said he was doubtful that the British government would find a deal it could agree to by then.

"Our experience so far, as well as the deep divisions within the House of Commons, give us little reason to believe that the ratification process can be completed by the end of June," he wrote, adding that the bloc should avoid "a rolling series of short extensions and emergency summits, creating new cliff-edge dates."

Tusk stressed that a no-deal Brexit should be avoided at all costs, considering the disastrous effects it could have on both the EU and the UK economically, and on peoples' lives.

He made clear, however, that there would be strings attached, including "sincere cooperation" with the EU until it leaves the group, perhaps alluding to comments by Brexiteers like Jacob Rees-Mogg that the UK should be as "difficult as possible" for the remainder of its time as a member state.

On Wednesday, the European Council is holding an emergency summit to discuss, among other things, UK Prime Minister Theresa May's request to extend the Article 50 period until the end of June. A series of draft conclusions seen by journalists indicated that the EU would agree to an extension, and likely push for an even longer period than that sought by May. It would also hold Britain to its obligation to field candidates and vote in the upcoming European election.

The document also reiterates a judgment established by the European Court of Justice, namely, that the UK has the right to revoke Article 50 at any time before completing the exit process.

The UK has been deadlocked for months over how to proceed with Brexit, and the prime minister's draft deal has already been rejected by Parliament three times. The opposition Labour Party favors a softer exit, which would include something like a customs union. However, many of the more ardent Brexit supporters in May's Conservative Party dismiss such a notion. Moreover, the Northern Irish DUP, which props up the Conservative government, is opposed to the so-called "backstop" measure put in place to avoid a hard Irish border.

Germany's Merkel to host UK PM May for Brexit talks

The British Prime Minister is set to ask for another extension to Brexit at an EU summit this week. Beforehand, May is scheduled to hold talks with the German chancellor before also meeting with France's Emmanuel Macron. (08.04.2019)