Austrian Chancellor Sebastian Kurz has vowed that his new Cabinet will probe the contents of the controversial video. But the government is already facing a no-confidence vote and may not survive next week. 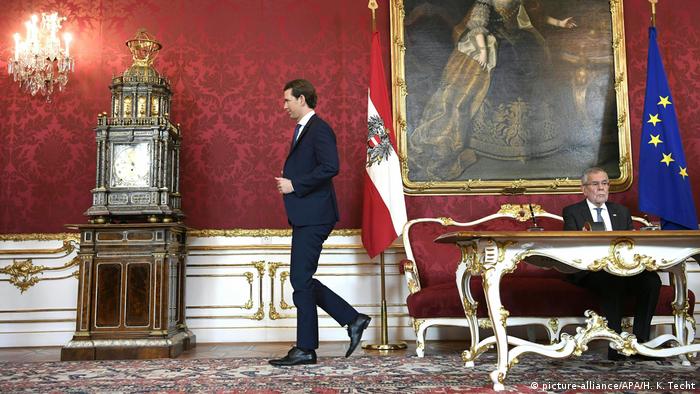 Austrian President Alexander Van der Bellen on Wednesday swore in a new government led by Chancellor Sebastian Kurz after the former government collapsed in response to a controversial video.

Strache, who led the far-right Freedom Party (FPÖ), stepped down from his position as vice chancellor and as leader of the party, triggering the coalition government's collapse. Authorities are investigating revelations that emerged in the video.

Foreign Minister Karin Kneissl, appointed by the FPÖ but not a party member, remained in her position.

Ratz is expected "to do everything to ensure full clarification, as far as the contents of the video rare concerned but also regarding the source of the video," Kurz said.

"With the swearing-in of an interim government, there is the possibility of conducting the affairs of state calmly and in an orderly way until election day," said Kurz.

But it is unclear whether Kurz's new government will survive even just one week. Parliament is scheduled to vote on a no-confidence motion put forward by the small leftist party Jetzt on Monday.

The motion could prove successful if the opposition center-left Social Democrats (SPÖ) and the FPÖ support it.

"In life, you always have to earn trust," Bures said. "And the last few days have shown that the chancellor has done nothing to ensure that parliament, which at the end of the day will take this decision, can place this trust in him."