Austria's far-right Freedom Party (FPÖ) says its ministers will step down from the Cabinet. The move came as Chancellor Kurz proposed the ouster of FPÖ member Herbert Kickl as interior minister after a video scandal. 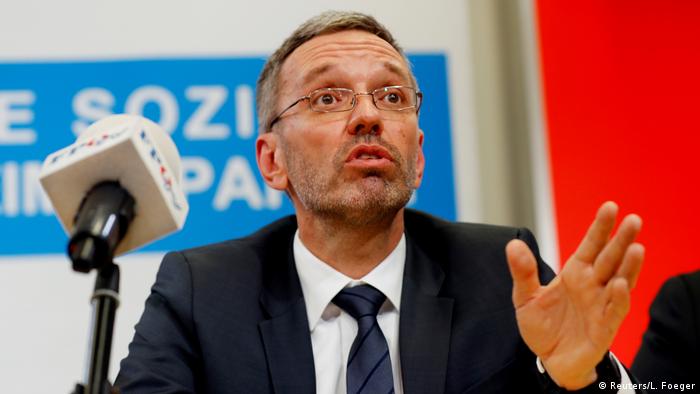 Austrian Chancellor Sebastian Kurz on Monday called on the president to sack Interior Minister Herbert Kickl (top photo) of the far-right Freedom Party (FPÖ), triggering an announcement from the FPÖ that it was withdrawing the rest of its ministers in solidarity.

The events come as fallout grows from a hidden-camera corruption sting that has led to the downfall of Austria's coalition government. Kurz said that "complete transparency" and "total clarification" were necessary after the scandal. He said he found that Kickl's response to the scandal had not displayed the "necessary sensitivity." Under the Austrian system, the chancellor can propose the removal of a government minister but this needs to be approved by the president.

The move toward ousting Kickl, announced at a press conference in Vienna, will have serious consequences for the Austrian government's ability to rule, as the departure of the FPÖ ministers will leave Kurz without people in key portfolios.

Kurz said he had discussed with President Alexander Van der Bellen that ministerial posts would be taken over by civil servants and technocrats should the FPÖ withdraw its remaining Cabinet members. The defense, labor, foreign and transport portfolios have been held by FPÖ or FPÖ-linked lawmakers.

However, the government may also have to survive a no-confidence vote that opposition parliamentarians have planned for next week.

Kurz broke up his party's governing coalition with the FPÖ and called snap elections amid a scandal caused by the emergence of a video showing now ex-Vice Chancellor Heinz-Christian Strache of the FPÖ offering lucrative business deals to a woman posing as a Russian oligarch's niece.

Strache quit his post as vice chancellor and party chief on Saturday after the video footage of the 2017 meeting on the Spanish island of Ibiza was released.

Herbert Kickl, one of the country's best-known politicians, was chairman of the FPÖ in 2017 when the footage was recorded. As FPÖ secretary general, he would likely have been aware of any illegal donations.

Kurz has previously acknowledged that the scandal "has damaged the image of our country around the world."

Kurz has repeatedly come under fire from many quarters for his decision to form a coalition government of his conservative Austrian People's Party (ÖVP) with the FPÖ after 2017 elections at which no party received a ruling majority. The marriage has become increasingly uneasy over time amid a series of scandals highlighting links between the far-right party and radical right-wing groups.

Austria's far-right vice chancellor, who quit after apparent dodgy dealings with a bogus Russian investor, was "a promising politician," said one Russian newspaper. Another hit out at the West's "blame Russia" rhetoric. (19.05.2019)