The audacity and arrogance of Austria's far-right led to their premature undoing. DW's Barbara Wesel sees the FPÖ scandal as a warning for conservatives willing to enter alliances with the far-right. 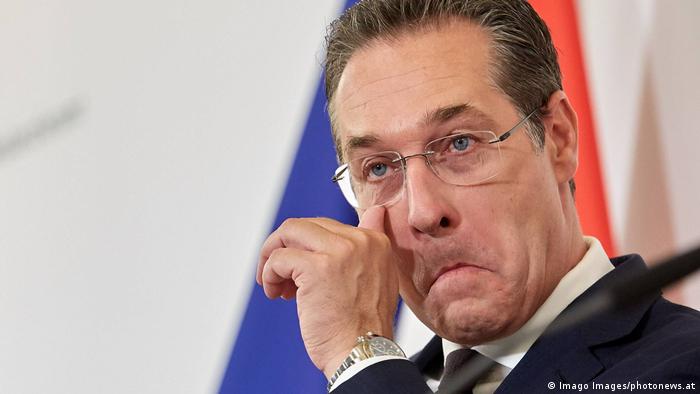 The Ibiza recordings of the secret meeting of now-former Austrian Vice-Chancellor Heinz-Christian Strache with a woman claiming to represent a Russian oligarch certainly make for great viewing. For his political opponents, the footage of the ex-leader of the Freedom Party of Austria (FPÖ) lolling about on a sofa, drunk and uninhibited, comes as a gift. For Austria's conservative Chancellor Sebastian Kurz, it comes as a loud warning. The final disguise of civility has been torn from Strache's face. What is revealed is a truly ugly grimace.

In reality, "Secret Operation Ibiza" did not yield any great surprise when it comes to the character of Strache and his party chums. The most astonishing thing is the sheer impudence of the FPÖ leader, who promised government contracts in return for party donations and also threw in biased media coverage from one of the biggest newspapers in the country. Strache behaved as if he owned the Alpine republic along with all of its citizens.

The Ibiza revelations came after a string of scandals that had put increasing pressure on the coalition of conservatives (ÖVP) and the far-right in Vienna. First, there was an FPÖ link to a member of the so-called Identitarian movement who received money from the perpetrator of the Christchurch terrorist attacks. That came after the party campaigned against public broadcaster ORF after one of its hosts justifiably questioned the party about the Nazi undertones of a caricature that the had been shared by the FPÖ youth wing.

Another FPÖ politician has likened migrants to rats, and Nazi anthems have been heard at social events closely linked to the party — the series of gaffes is endless. But the FPÖ has been operating off the democratic spectrum for a quite a while now. It has deliberately abandoned attempts to distinguish itself from neo-Nazis and other right-wing radical groups.

Blow for the right

The affair is a blow to the planned alliance of right-wing parties ahead of elections to the European Parliament. Right-wing party leaders are either shrugging their shoulders, posturing themselves as victims of the affair or denying involvement altogether. But this latest FPÖ incident proves once again that the right-wing populists are not seeking reform in Europe — rather they want to bring about its destruction. Their political model is partially inspired by Russia and in part by fascism.

The hopes of Italy's interior minister and Lega party leader, Matteo Salvini, who aspired to win the conservative European People's Party (EPP) as an ally and really influence European politics, may finally be crushed with the Ibiza case.

On the campaign trail, German politician Manfred Weber, the EPP's lead candidate, distanced himself from the Ibiza affair by pointing out that he has long been against populists and extremists — whether they are on the left or right — because they do not offer real solutions. Why he even mentioned leftists — when this is really about right-wing extremists — and why his attempt at distancing himself from far-right parties was so feeble remains somewhat of a mystery.

Unfortunately, it is Weber who for years laid the way for the rise of Viktor Orban, Hungary's authoritarian prime minister. Orban — a self-proclaimed anti-democrat who openly rejects European values and norms — now serves as a model for Salvini and other right-wing populists.

Perhaps Weber is so embarrassed about all of this that he doesn't want to talk about the FPÖ affair. If he does not finally realize what is brewing in the right-wing corner of the European Parliament and that he cannot do business with these parties, then the man is truly beyond help.

Getting dirty in the swamp

Earlier it seems that Chancellor Kurz believed he could get away with hitching a ride with the FPÖ. But the far-right party has recently abandoned any restraint and made Kurz's life in the coalition increasingly difficult. Austria's chancellor wants to preserve his residual credibility as a bourgeois conservative, but Strache and his friends have forced his government further and further into an extremist right-wing corner. Kurz should have realized that this alliance would be neither tenable nor sustainable in the long run.

It is actually rather simple: those who climb into the swamp get dirty. Anyone who gets involved with with right-wing extremists and friends of neo-Nazis is a useful idiot. There can be no coalitions with those who label Western democracies "decadent" and rave about dictatorship à la Putin. The Strache scandal is a final warning to all those in Europe who believe that they can get into bed with right-wing extremists but sill consider themselves democrats. It is too late for a call to "nip it in the bud."

Now the time has come for: "Do not continue down this path!"

Austrian Chancellor Sebastian Kurz has said he plans to step down, with the country's foreign minister to take his place.