Heinz-Christian Strache has been accused of offering business deals to a woman claiming to be Russian in exchange for her help in Austria's 2017 election. German media published a recording of the meeting. 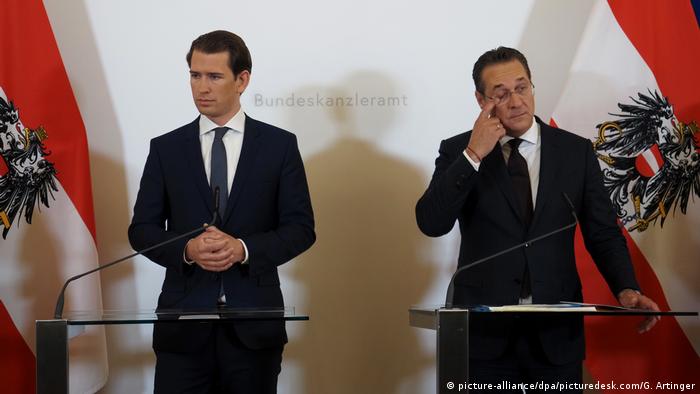 In minute-long extracts of the seven-hour video, which was reportedly filmed on the Spanish island of Ibiza, Strache, fellow Freedom Party of Austria (FPÖ) politician Johann Gudenus, and his wife, can be seen drinking and talking with the woman and another man.

The meeting took place in July 2017, just months before Austrian national elections that propelled Strache into the government as the junior partner of conservative Chancellor Sebastian Kurz. Süddeutsche Zeitung and Der Spiegel did not reveal the source of the video to protect their identity.

Read more: Freedom Party of Austria — what you need to know

Plea for tolerance in Austria

Austria's FPÖ party on the rise

In the video, the woman can be heard telling Strache that she is very wealthy and wants to buy a large block of shares at Austria's largest newspaper, the Kronen Zeitung. She reportedly claims to be interested in the paper so that she can provide favorable pre-election coverage of the FPÖ. In return, she demands political favors.

Strache reportedly says to her that the Kronen Zeitung deal could push the FPÖ from 27% up to 34% in the vote, and proposes a number of ways in which he could repay the woman.

Throughout the course of the video, Strache is seen telling the woman that he wants to transform Austria's media landscape in the same way that right-wing Prime Minister Viktor Orban has done in Hungary.

Orban has cracked down on freedom of the press in recent years. Media outlets critical of the government are almost non-existent.

Strache, who at one point reportedly refers to journalists as "whores," last year attacked Austria's public broadcaster ORF, straining the FPÖ's relationship with Kurz and his Austrian People's Party (ÖVP).

In a clip of the video released by the Süddeutsche Zeitung and Der Spiegel, Strache tells the woman that if his party gains power, state contracts would be given to her supposed companies and no longer be awarded to Austrian construction giant Strabag.

In the full-length video, he makes clear that the companies could "overcharge" for the work to boost profits, according to the German media outlets. He also suggests the possibility of breaking up Austria's betting monopoly to award licenses to the woman's affiliated entities, both newspapers reported.

The woman, who reportedly calls herself Alyona Makarova, also repeatedly states that she wants to invest hundreds of millions of euros in Austria. She is unambiguous about the fact that the money came from dubious sources, according to Süddeutsche Zeitung and Der Spiegel.

Strache and Gudenus, who is the FPÖ's parliamentary whip in the Nationalrat (National Council), appear to be unfazed by that admission. Instead, Strache suggests that the woman could funnel cash to his party through back channels, skirting Austria campaign finance laws.

Strache reportedly goes on to claim that she could simply donate the money to a "charitable foundation" that would then channel the cash to the party. He allegedly does not name the foundation, but says that some "very rich people" had already donated anywhere from €500,000 ($558,000) to €2 million.

He can be heard naming a number of the supposed donors, such as gun manufacturer Gaston Glock, German billionaire Heidi Horten, Austrian real estate mogul Rene Benko and the gambling machine company Novomatic.

Glock, Horten, Benko, and Novomatic denied that they made such donations.

Neither of the politicians broke off the meeting, and the Süddeutsche Zeitung reported that Gudenus was in contact with Makarova thereafter.

The Süddeutsche Zeitung and Der Spiegel said they submitted the video to independent experts in Germany and the Fraunhofer Institute prior to publishing the story to ascertain its authenticity.

When contacted by both papers, Strache did not deny the veracity of the video, but said the "merry and relaxed vacation get together" was a "purely private" meeting. He denied any wrongdoing.

Strache reportedly said that he "repeatedly referred to the importance of abiding by existing Austrian law throughout," adding, "that also applied to the prospect of things like donations to charitable foundations."

All eyes on Kurz

Chancellor Kurz has not commented on the incident, but a government source told the Reuters news agency that he is planning to make a statement on Saturday.

Late on Friday, FPÖ Secretary General Christian Hafenecker said in a statement that the video release was an attempt to smear the party shortly before EU elections, comparing it to a political assassination.

The statement claimed that none of the people named as donors by Strache had ever given the party money. "As the video was made illegally, we are currently preparing to take appropriate legal action," Hafenecker said.