A scandal over a major fraternity's Nazi-glorifying songbook has engulfed Austrian politics. The man it all centers on said he was just 11 when the book was published, but he announced that he is retiring from politics. 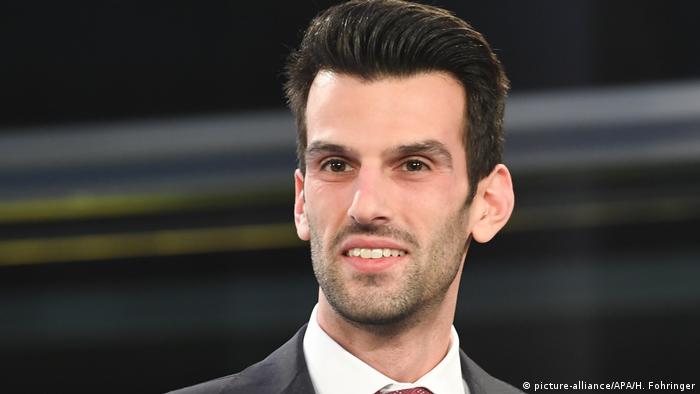 Udo Landbauer, a senior member of Austria's far-right Freedom Party (FPÖ), resigned from all political offices on Thursday after revelations that the fraternity he helped lead until recently had used an anti-Semitic songbook that made light of murdering Jews.

The scandal increased pressure on his anti-immigration party as well as Chancellor Sebastian Kurz's conservatives who formed a coalition government with the FPÖ last year.

No place for anti-Semitism

Vice Chancellor and FPÖ chief Heinz-Christian Strache welcomed Landbauer's departure and said "anti-Semitism has no place" in his party and in right-wing fraternities. Strache himself once had links to extremist groups.

The 31-year-old Landbauer said he was just 11 years old when the songbook was printed and only found out about it last week.

What did the songbook say? The lyrics in Germania zu Wiener Neustadt's 1997 book reportedly included "Step on the gas ... we can make it to seven million," referring to six million Jews murdered in the Holocaust. Other songs praised the Waffen SS and Nazi paratroopers behind war crimes in Greece.

What is Landbauer's connection to the fraternity? Landbauer was vice president of the Germania fraternity until recently. About 40 percent of FPÖ members including ministers are members of right-wing fraternities, many of which promote reunifying Austria into a "Greater Germany," according to Austria's main Jewish body.

Who are the FPÖ? The right-wing, populist party, which says it abandoned the Nazi ideologies of its founders in the 1950s, is Eurosceptic, anti-immigration and anti-Islam. They entered government last month as the junior partner of Kurz's conservatives. Previous coalition governments with the FPÖ have all collapsed before the five-year period of governance.

What happens next? The government will have a tough time dissolving the Germania fraternity if they cannot prove the anti-Semitic songs were actually sung.

Austria's chancellor has pledged to ban a controversial student fraternity for promoting neo-Nazi ideas. The group faced widespread criticism after reports revealed it had printed songbooks celebrating the Holocaust. (31.01.2018)