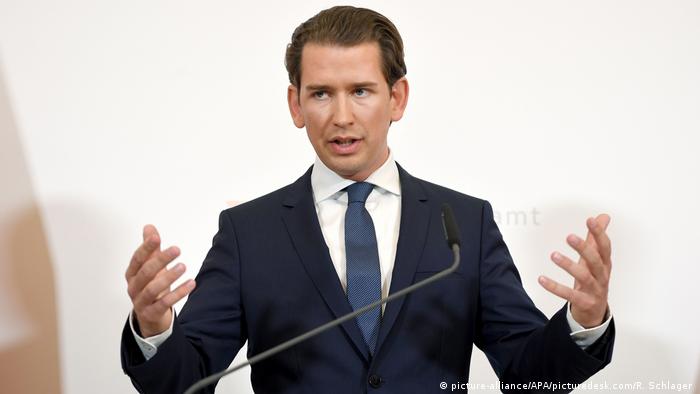 Austrian Chancellor Sebastian Kurz announced on Saturday that the country would have fresh elections in the wake of a major scandal involving now-former-Vice Chancellor Heinz-Christian Strache.

Kurz praised his own Austrian People's Party (ÖVP) for seeing through many of its campaign promises with the help of Strache's far-right Freedom Party of Austria (FPÖ), but the chancellor said that "enough is enough" after the latest FPÖ embarrassment.

"I promised voters I would remain true to myself, no matter what," Kurz said, declaring that he had withdrawn the ÖVP from the government. "I said I would always do what is right and what is necessary."

Kurz went on to describe a string of anti-Semitic scandals committed by FPÖ members, calling them "hard to swallow." He accused the Freedom Party of damaging the good work he had tried to do for the country.

"This is not what our country needs. I am not in politics to hold this office...but to work for our beautiful country," Kurz said.

Austrian President Alexander Van der Bellen later confirmed that there would be a new election, but a date has not yet been determined. Van der Bellen condemned the "bold disrespect to the citizens of our country."

"This is not Austria," he added.

Thousands of people had protested outside the chancellery in Vienna all day, calling for a new election.

Germany's Der Spiegel newsmagazine and daily Süddeutsche Zeitung first published a video on Friday that showed Strache offering to give an alleged Russian investor lucrative contracts in exchange for helping his far-right Freedom Party of Austria (FPÖ) in the 2017 national elections.

The video was taken undercover on the Spanish island of Ibiza in the months before the October 2017 elections that would see the FPÖ become the junior coalition partner to Kurz's conservative ÖVP.

The seven-hour-long tape was released to the German news outlets, but its provenance has not been made public.

In the footage, Strache is seen speaking to a woman who claims to be the niece of a Russian oligarch who wants to invest in Austria. The woman, who calls herself Alyona Makarova, says her uncle wants to buy a controlling interest in Austria's largest tabloid, the Kronen Zeitung. The newspaper could then be used to give the FPÖ favorable coverage.

Later in the video, Strache calls journalists "the biggest whores on the planet." FPÖ parliamentary group leader Johann Gudenus is also in the video.

Strache excused his behavior by calling it a "drunken story" where he was trying to act "macho," adding that nothing had come of the meeting.

The FPÖ was founded in 1956 by former Nazis. Since the late 90s, however, the party has revamped itself to be more mainstream. Nevertheless, Strache has often acted as Kurz's go-between to Europe's most successful populist parties, such as Fidesz in Hungary and the League party in Italy.