Compared with national elections, it's always more difficult getting voters to cast ballots in EU polls. Though the upcoming vote is no different, the chance to fend off the far-right put a crack in voter apathy. 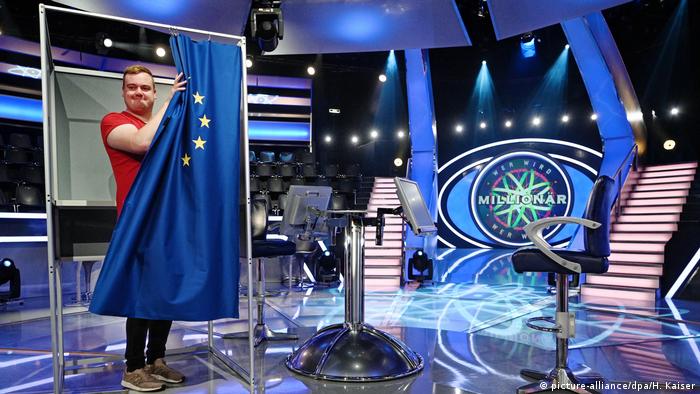 It's the world's largest exercise in multinational democracy, but getting voters to take part in European Parliament elections has never been easy. Turnout for the last election, in 2014, saw nearly 60% of voters ignore the polls. But, after enduring a migrant crisis that has revealed a profound moral and political divide and the Brexit referendum for the UK to leave the union, some voters see the May 23-26 election as their chance to put a limit on the success of nationalist, right-wing parties.

According to political scientist Alexia Katsanidou, head of the University of Cologne's social science institute GESIS, the origins of the EU's long-standing voter apathy are easy enough to identify, though difficult to combat. 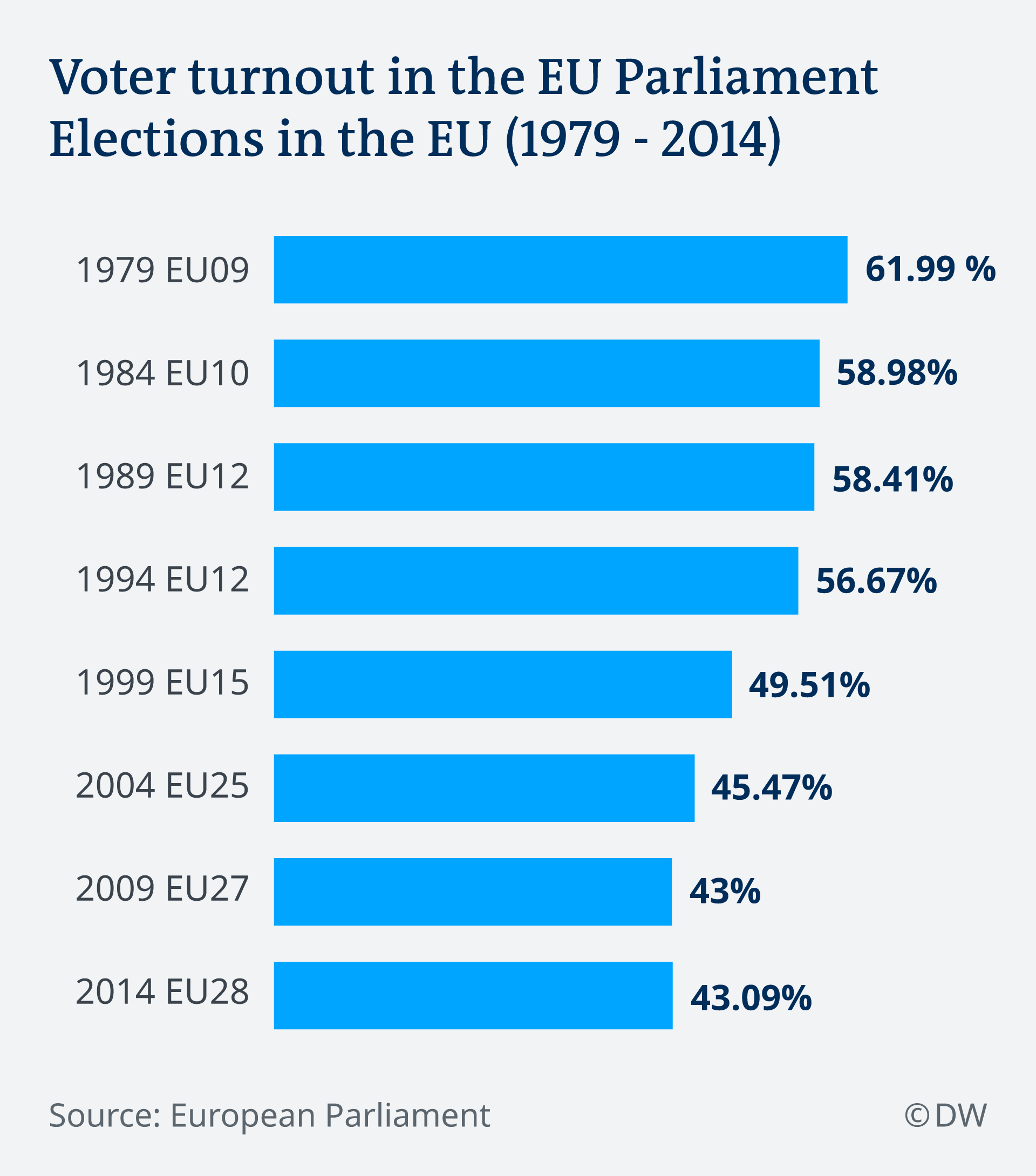 "One major factor is the lack of political efficacy, the feeling that your vote can influence something," Katsanidou told DW.  "There is also a degree of cynicism, the idea that nothing has changed since the last time you voted, so why vote again?

"The EU has constrained what the major parties can do," she added. "This forces centrism and the idea of a 'responsible government' as opposed to a responsive one. Responsiveness has been sacrificed, which has in part led to the rise of right-wing populism we are seeing across Europe today."

Anti-Europeans set to take 33% of seats

Indeed, according to a recent report from the European Council on Foreign Relations, "anti-Europeans are on their way to winning more than one-third of seats in the next European Parliament, the stakes in the May 2019 election are unusually high."

It's precisely that rising tide of nationalism, however, that might finally see the EU vote become more than an afterthought. Electoral research shows more people vote when populists parties are on the ballot. In the EU, disaffected citizens anxious over a perceived loss of national identity turn out to support the populists, while those in the political center and left get up to vote in greater numbers out of fear a reinvigorated right-wing may lead Europe to repeat some of the darkest moments in its history.

"I'll vote only because I'll feel guilty if I don't," said Alex, a 37-year-old German. "But I don't feel strongly about any party. It's more like voting against the populists than voting for something."

Illaria, a 35-year-old Italian, said she plans to vote in the EU elections to do what she can to diminish potential gains by the far-right.

"If moderate and progressive people don't vote, extremism will spread at the EU level as well," she told DW. "I am afraid the EU will lose its function as watch-guard."

Anne, a 26-year-old German graduate student, agreed that not caring about the result of the European Parliament elections could have dire consequences.

"I care a lot about the outcome of this vote, and I hope the Brexit disaster is a wake-up call to those who believe that Europe doesn't affect them." 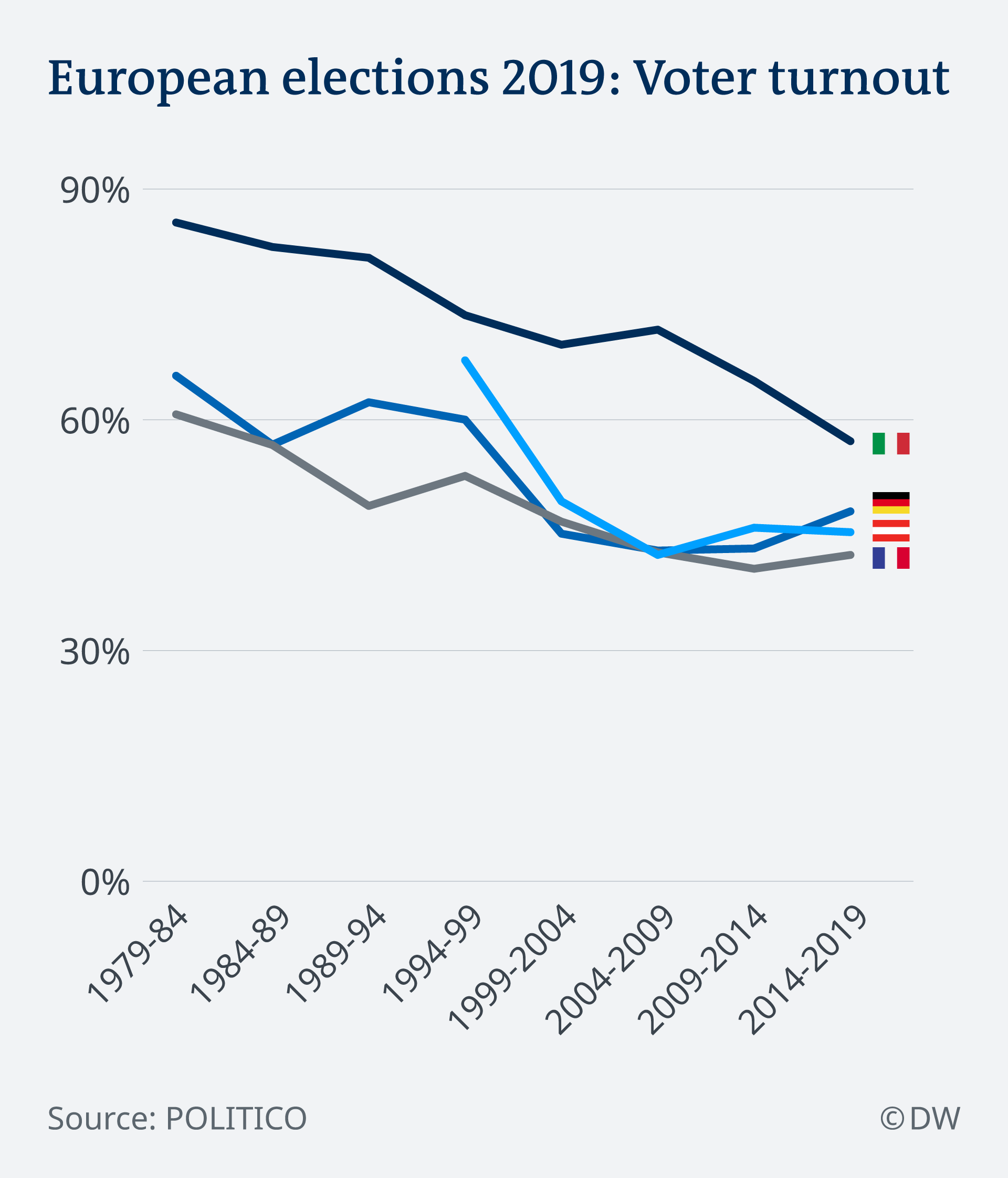 'We take the EU for granted'

There also the issue, Katsanidou pointed out, that shifting alliances in Europe, such as Hungary's ethno-nationalist Fidesz party being kicked out of the European People's Party, has shown that the traditional blocs are likely to fall apart after this election. This has left voters wondering what comes next, and many chose not to vote rather than to vote for what they struggle to understand.

This is compounded by what the political scientist described as a consensus that "European integration has made politics more complicated and made it more difficult to see where and how decisions are being made."

"I think most people like Europe,especially young people, but they don't know how it functions or they think of it as full of useless technocrats. Also, I think we take it for granted," said Adele, 30, from France. "The media care. The people? I'm not so sure.

Tony, 36 and also from France, summed up the voters' malaise and detachment: "Maybe I'm a bad citizen, but I just don't care. And the politicians don't care about me either."

UK confirms participation in EU elections in May

For the first time, the UK acknowledged it will take part in the upcoming EU elections, as there was not enough time for the government to get its Brexit deal approved. PM Theresa May said she deeply regretted the move. (07.05.2019)

Angela Merkel: We need to fight for Europe

Populism, Russian election-meddling, Chinese economic power: the list of challenges facing the EU is long, says the German chancellor. In a wide-ranging interview, she set out what Europe needs to do to survive. (16.05.2019)

Why is the EU so complex?