What happens if Austria′s chancellor is voted out? | Europe | News and current affairs from around the continent | DW | 21.05.2019

What happens if Austria's chancellor is voted out?

Sebastian Kurz may be about to lose his position as Austria's chancellor. But even if a majority of lawmakers side against him in a no-confidence vote, that doesn't necessarily spell the end of his political career. 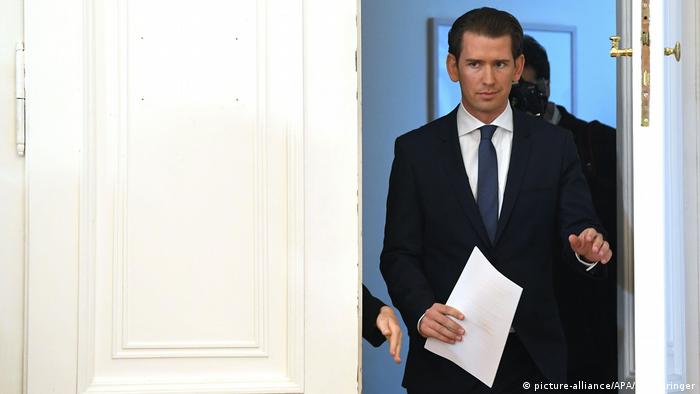 Thomas Hofer, an expert on Austrian politics, spoke with DW about the likelihood of the no-confidence motion against the Austrian chancellor and his political chances in the upcoming snap election.

DW: Austrian Chancellor Sebastian Kurz is set to face a no-confidence vote in parliament on Monday. What happens if he loses?

Thomas Hofer: In that case, it would spell the end of this government. For the time being, it would also be the end of his chancellorship. Austria's president would have to appoint a policy expert or an official who would form a government and take on the chancellor's official functions. This person would remain in office until a new government comes together after the snap election in September.

This has never before happened in Austria; it would be a political crisis. At the moment, there's a strategic tug-of-war going on in the background, with pressure on the center-left Social Democrats (SPÖ) not to allow this no-confidence vote.

All cabinet ministers belonging to the far-right Freedom Party (FPÖ) have left the coalition government after Interior Minister Herbert Kickl was forced to step down in the wake of the Ibiza video scandal. An interim cabinet will be expected to step in until the election in September. But how much authority does such a cabinet actually have?

Kurz has planned to stay in office, along with the ministers from his own conservative People's Party (ÖVP), and fill the vacant positions with policy experts and civil servants until September. They're unlikely to pass any major legislation during that period. Austria has little experience with minority governments — and without cooperation from the Freedom Party, which has been kicked out of government, they're not going to get much done.

What concrete consequences would a no-confidence vote have for everyday politics in Austria?

Many of the reforms Kurz wanted to pursue with the FPÖ would collapse. Don't forget: Many legislative initiatives were pushed through in the face of massive resistance from the Social Democrats. It will be very difficult to enact those reforms that have already entered the legislative process. Lawmakers would have to start from scratch, and it would be difficult to launch any new initiatives.

SPÖ leader Pamela Rendi-Wagner has demanded the entire government step down, to be substituted by an interim cabinet of experts — that would include Kurz and the ÖVP ministers. How likely is that scenario?

That depends on the no-confidence vote. The SPÖ has given signs that it will support the motion, or even make its own proposal. It's quite likely that this scenario will come into play. Then it would be up to President Alexander Van der Bellen to form a caretaker government, unless there's pressure on the SPÖ to support a minority cabinet. If the SPÖ no longer wants Kurz as chancellor, it will support the no-confidence motion. In that case, we'll see a cabinet composed entirely of policy experts — for the first time in Austrian history.

Who could President Van der Bellen name as interim chancellor?

That remains unclear. It would probably have to be a respected politician, someone seen by the public as being non-partisan — and there aren't many people like that. Former President Heinz Fischer has already indicated that he would rather not be involved, but he hasn't ruled it out. But we won't see any discussion about that until it becomes clear that Kurz won't survive the no-confidence vote.

If the vote is successful, it would be a political first for Austria's federal government. Would Kurz survive this blow, or would it be the end of his political career?

No one is talking about an end to his political career just yet. He would still enter the race as his party's top candidate, and his chances of crossing the finish line as the winner in September aren't bad. He'll try to play the role of the victim. If the SPÖ supports the no-confidence vote, Kurz will accuse the Social Democrats of not having fulfilled their role of supporting the state in a crisis.

In September, the real question will be who Austrians trust to lead the country. At the moment, Kurz is still doing well in opinion polls, and he might even do better if he takes back a few seats from the Freedom Party. But the situation today is so volatile — it's still too early to say how the election will turn out.

Austria's far-right vice chancellor, who quit after apparent dodgy dealings with a bogus Russian investor, was "a promising politician," said one Russian newspaper. Another hit out at the West's "blame Russia" rhetoric. (19.05.2019)