Austrian government on verge of collapse as EU election looms

Chancellor Sebastian Kurz is to nominate a caretaker government. He faces a vote of no-confidence in the wake of a scandal that saw the wholesale removal of coalition party politicians. 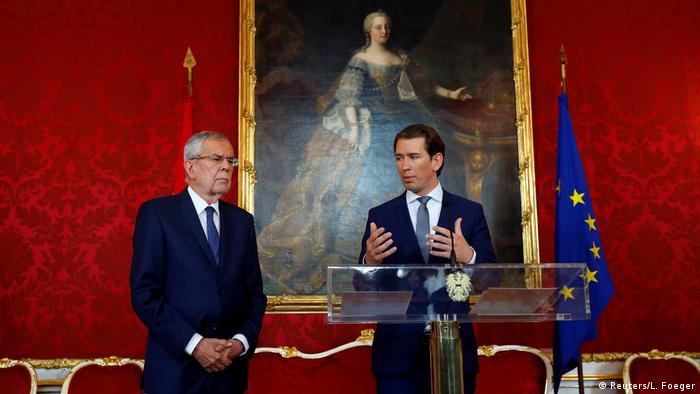 Austrian Chancellor Sebastian Kurz, after consultations with President Alexander Van der Bellen on Tuesday, announced he would appoint a new caretaker government to be in place for three months.

According to Austrian media, the new ministers in the caretaker government are expected to be named by Wednesday afternoon.

Kurz, who faces a vote of no-confidence on Monday, was forced to call for new elections in September after his government's coalition partner, the Freedom Party of Austria (FPÖ), was wiped out in the wake of a video scandal that forced Vice Chancellor Heinz-Christian Strache to resign on Saturday.

The vote of no-confidence was originally slated to take place this week but has been moved back to Monday, "to give space to the EU election campaign," according to Wolfgang Sobotka, the speaker of Kurz's conservative Austrian People's Party (ÖVP).

Later Tuesday evening, President Van der Bellen addressed the nation with a moral appeal. He spoke of the "turbulent" situation facing the nation, underscoring the "disturbing nature" of the Strache video, at the same time he implored Austrians not to become cynical.

He noted the "moral dereliction" on display in the video, but said it was not emblematic of the actions of all politicians, many of whom "want to make the world better." Van der Bellen said, "That's not us, that's not Austria, but we have to show it."

He also stressed the potential economic consequences of the scandal and called on politicians to refrain from engaging in electioneering, telling them, "don't fight for your party, fight for Austria."

After urging Austrians to vote in EU elections on Sunday, Van der Bellen sought to reassure citizens, telling them, "Have courage, we'll get this taken care of."

Kurz, whose ÖVP holds 61 of the parliament's 183 seats, was toppled after a damning video of Strache was published on Friday. In it, Strache is seen offering political favors in exchange for help in boosting the FPÖ's election campaign ahead of national elections to a woman purporting to be the niece of a Russian oligarch. The meeting took place in Ibiza, Spain.

In the wake of the video, Strache was forced to resign, and after Kurz fired Interior Minister Herbert Kickl on Tuesday, the remainder of the FPÖ's members resigned in protest.

The FPÖ held a number of important cabinet positions, heading the interior, defense and labor ministries. Foreign Minister Karin Kneissel, who was nominated by the FPÖ but is not a party member, will remain in her post.

Van der Bellen, who is affiliated with neither party, said, "let us not forget that there has been a massive betrayal of trust as a result of this disturbing image of immorality from Ibiza."

Van der Bellen urged Kurz to appoint "impeccable experts" to the interim ministerial posts. He also called on lawmakers to work together, saying, "this is about calm, reason, and last but not least, the responsibility of government."